Tottenham: New boss will have 'huge impact' on Kane's future

The Welshman netted an exhilarating treble in Spurs’ 4-0 win for what was his first hat-trick in English football since his treble against Aston Villa in 2012.

It took his season total to 14 goals from just 30 appearances in all competitions for Spurs since joining on loan from Real Madrid last summer.

It also allowed Bale to extend his impressive recent run in the Premier League, with the Welshman netting eight goals in as many Premier League games.

It is the first time that the 31-year-old has enjoyed a consistent run of games over the past few seasons.

Asked how he was feeling about his current form, the Welshman appeared to hint at not fully getting an opportunity under both Zidane at Real Madrid and Mourinho before his sacking at Tottenham. 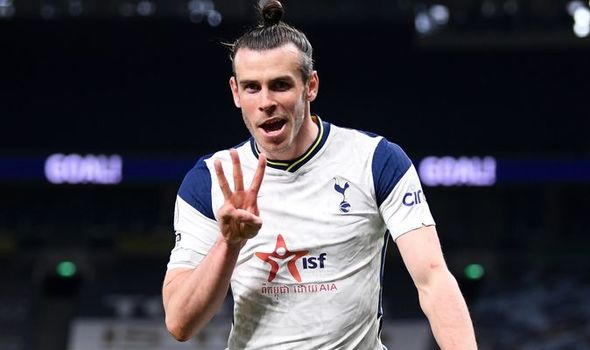 Talking to Sky Sports following Spurs’ 4-0 win, he said: “Winning always makes everyone happy and gives a winning mentality to the dressing room.

“It’s not going to happen overnight but I feel like we’re taking a step in the right direction.

“Obviously you have to take your chances when they come, and thankfully I had a few tonight.

“I’m feeling good. As I’ve said before I just needed to play games and get a run of games and I’m doing that now, so I’m happy and when I’m happy I normally play well.”

Bale’s form is certainly a contrast to his displays earlier in the 2020/21 campaign.

The Welshman did not appear to have the confidence of former boss Mourinho, as he started just one Premier League game before the end of January, contributing a solitary goal.

It mirrored his treatment from Zidane at the Bernabeu, where due to a combination of fitness issues and inconsistent form, Bale only appeared in a total of 20 matches in all competitions during his most recent season in Spain before joining Spurs.

Indeed, during his time at Real Madrid, the 90-cap Welsh international had never managed to appear in more than 31 league games in a single season.

Having joined Spurs in order to build fitness ahead of the rescheduled UEFA European Championships set to take place this summer, Bale certainly appears to be doing that with his run of games and goals.