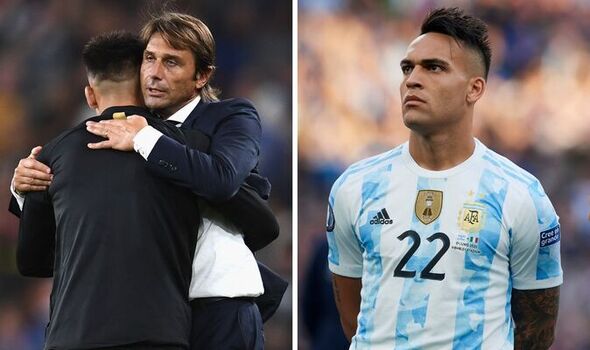 Tottenham are ready to table a huge offer worth up to £77million for Inter Milan striker Lautaro Martinez with Antonio Conte said to be ‘crazy’ about re-signing his former player. The Italian worked with the prolific centre-forward during his two-year reign at the San Siro between 2018 and 2020 and Martinez was a key cog in his Serie A title-winning side.

Together, the pair shared some of the best moments of their career and it appears Conte would love to continue their story together.

According to Italian journalist Alfredo Pedulla, Spurs are ready to seriously test the resolve of Inter with a mega opening bid.

He said on TV channel Sportitalia: “Lautaro Martinez wants to stay at Inter at all costs. But Tottenham, who are working on Kane’s renewal, will make an important proposal for Lautaro, from €90 million upwards I am told.

“Then legitimately he can decide to evaluate, to stay. But Tottenham will make an attempt.

“For Lautaro, his will is ironclad, there is no room for manoeuvre. But Tottenham will try with their budget because Conte is crazy about him, then Lautaro and Inter will decide.”

Inter do not want to lose their talismanic striker and are expected to reject any offers that arrive on their lap.

Chelsea have also shown interest in Martinez, who is more than happy in Milan, where he is tied down to a long-term contract.

But if Inter manage to re-sign Martinez’s former strike partner Romelu Lukaku and Paulo Dybala, there could be scope for Tottenham to push a move over the line.

It’s important not to forget that Spurs had a £60m deal in place with Inter to sign Martinez last summer before the move was blocked.

He remains a player of huge interest to Conte, who would love to partner him with Harry Kane and Heung-min Son in attack.

Tottenham are hopeful that they can convince Harry Kane to sign a new contract in north London.

His hopes of joining Manchester City now appear to have faded following their capture of Erling Haaland.

Spurs are starting to show huge ambition in the transfer market, something that is only going to please Kane.

Ivan Perisic, Fraser Forster and Yves Bissouma are all set to join up with Conte’s squad in pre-season.

More signings will also follow with Djed Spence and Martinez now in Tottenham’s sights and a deal for the right wing-back is seemingly next on the agenda.