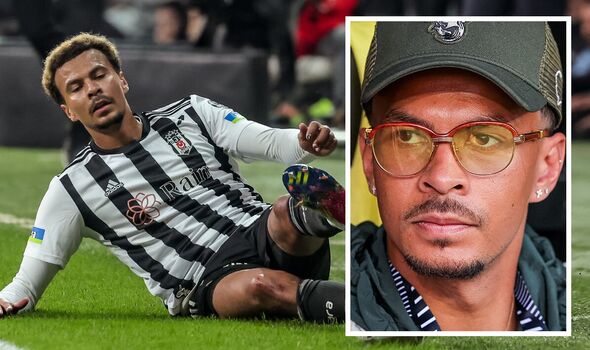 On Wednesday night, with his Besiktas side losing 1-0 to Ankaragucu in the Turkish Cup, manager Senol Gunes turned to his bench to see what options he had to change the game. On came the likes of ex-Everton flop Cenk Tosun, Southampton’s on-loan winger Nathan Redmond and West Ham defender Arthur Masuaku.

Yet one man was cruelly overlooked; A man who once seemed to have the whole world at his feet; A man who scored twice against Real Madrid in the Champions League, whose moment of genius saw him earn a goal of the season winner against Crystal Palace, and who was at one time considered potentially England’s most gifted player since the likes of Paul Gascoigne.

That man was Dele Alli. And as he sat kicking his heels on the bench after yet another snub from his boss, he may have been left wondering, not for the first time, where it all went wrong.

So why has it not worked out for Alli in Turkey so far? Who is most to blame? And where does he go from here?

The Turkish Super Lig has garnered something of a reputation as a place for players to go to at the tail-end of their careers. Yet speaking from his home in Belgium, journalist Bayazit pointed out that it can also provide a chance for fallen stars to get back on track. “Besiktas have a good track record of revitalising careers,” he explained.

“Back in 2004, for example, John Carew was sidetracked at Valencia at a young age and relaunched himself in Turkey before going on to flourish in the Premier League. It happened with Nicolas Anelka, too. It can often be a place to put yourself back in the spotlight after struggling, and that was the hope when Dele joined from Everton.”

Akman, who has been a Besiktas fan all his life and is now seeking a career as a footballer in Turkey, summed up the mood in the fanbase upon Alli’s arrival. “I think there was cautious optimism, because we had seen what he could do in England but also knew how badly things had been going for him recently,” he said.

“He got a decent welcome at the airport. It wasn’t the biggest, but still a good one, at an airport that wasn’t in use any more at a late hour of the night. So there was definitely excitement.”

Initially there were promising signs, with Alli pulling off a delicious nutmeg with one of his very first touches on his debut to remind everyone what he used to be all about, before scoring an important goal in a 3-2 win against Ankaragucu in the league shortly afterwards.

“He didn’t do a massive amount, but he showed a few promising moments,” Akman remembered. “Turkish fans love players who dribble and show off, and people went crazy for the nutmeg. We thought ‘Ok, he still has some talent. If this is the start and he builds, it could be very good.'”

Unfortunately, that is where things started to go wrong.

Alli picked up a frustrating hamstring injury which kept him out for a few weeks, and then struggled to make an impact on his return. At the time, Whitehead was working as part of manager Valerien Ismael’s backroom staff. And the former Stoke and Sunderland midfielder was keen to set the record straight on some of the stereotypes attached to Alli.

“A lot gets said about Dele in terms of his work-rate in training and everything that comes with him,” he said. “But overall he trains well, he does everything he can. I just think he gets a raw deal from a lot of people. How about giving him a bit of a break? Leave him alone.

“Because he burst on the scene and was a big England star, I feel he gets harshly treated, and he’s a lovely boy, a lovely kid doing his best, and he just gets criticised. We’d have chats and I’d ask him if he flies home every now and again when he has a few days off. He didn’t, because he wanted to stay and get himself into the culture of what the Turkish league is about. He went all in.”

Things went from bad to worse, though, when Ismael and Whitehead were sacked following a poor run of form and Gunes came in, who appeared to make it clear from the start that he didn’t fancy Alli. The ex-Tottenham man’s lowest moment came when he was hauled off to a chorus of boos after just half-an-hour during a Turkish Cup game against third-tier Sanliurfaspor with the team 2-0 down. It was a decision Bayazit didn’t agree with.

“At the time, I did not understand it,” he admitted. “Alli was one of maybe only two or three players running their socks off and actively trying to turn the game around. Something must have happened afterwards between the coach and him, and I think he was used as a scapegoat a bit.”

Akman, however, was less sympathetic. “Since being back from injury, he’s been a bit of a ghost on the pitch. The issue isn’t body language, but the fact he doesn’t look keen to get on the ball. There’s expectation that the No.10 is the main man, and that he’ll go and make things happen, but with Alli, it feels like he’s waiting for the game to come to him.”

Alli has barely featured ever since that fateful match, with Gunes criticising him both publicly and privately. So, what happens now? All three interviewees seem to be of the same conclusion that a future at Besiktas looks difficult.

“Under that manager, you’d have to say it doesn’t look good,” Whitehead sighed. “Have his performances been good enough recently? Probably not. But you could say the same about a lot of players, and people seem to jump on him really quickly. I’m not just trying to protect him, but he’s an easy scapegoat, and is getting unfairly crucified.”

“I think he’s been a bit unfortunate with the circumstances,” Bayazit added. “The team hasn’t functioned throughout the season and the midfield has been a shambles. If they start playing good football and Dele can be eased back in and start producing, you never know. But it seems more likely it will end up in a dud than a success.

“Sadly, the situation reminds me of Loris Karius, who seemed to come here from Liverpool purely to escape the criticism. Some people just seem to attract that kind of attention, where others don’t want them to succeed.”

“I think he’ll leave this month if it’s possible,” agreed Akman. “But there’s no loan cancellation agreement with Everton, so it may cost too much. You never know when things could improve.

“He could be suffering from severe performance anxiety, which I’ve certainly felt as a player, or he could feel overly relaxed, because he’s moved down a level and the game is slower, with less pressure. Nevertheless, there’s a distinct lack of hunger and desire.

“If he’s not playing, you want him to feel angry, but I just don’t see that. A little flick here and there is not enough. I think he’ll go back to England, drop down a level and find his comfort spot.”

Whitehead has recently been appointed interim manager at Championship side Cardiff. So, is he tempted to have a cheeky word in Alli’s ear to try to tempt him to the Welsh capital? “Have you got a spare £100k a week?” he laughed. “Seriously though, if that’s what he needs to regain his confidence and form, I don’t think he’s someone who would turn his nose up at the chance.”

What happens in the coming weeks with Alli is anyone’s guess. But it seems fair to say that there are a number of factors at play to explain why the move to Turkey that was supposed to relaunch his faltering career has turned into a nightmare.

Sources have told Express Sport that Alli has been struggling to deal with the criticism thrown his way, and is finding it difficult to accept the way his career has gone downhill. But ultimately nothing will change until his performances improve, and he would probably be the first to admit that they simply have not been at the standard required recently.

You would be hard pressed to find a football fan who would not want to see Alli back at his dazzling, devastating best. Sadly, unless his next move is the perfect one, he may well be destined to go down in history as a player whose fall was as rapid as his rise.