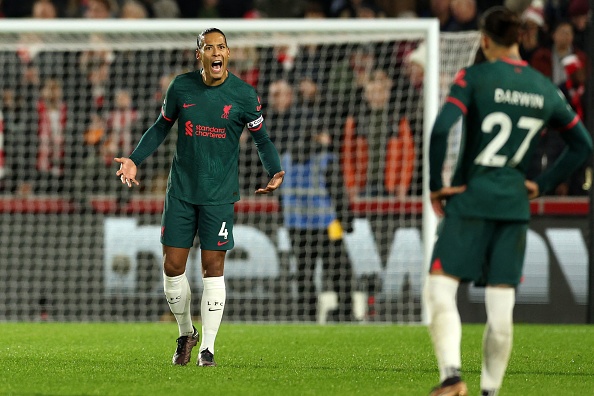 Liverpool are set to be without Virgil van Dijk for an extended period after scan results indicated his hamstring injury is ‘worse than first feared’.

The Dutchman came off at half-time in the Reds’ 3-1 defeat to Brentford on Monday.

The 31-year-old was far from his usual self in the first half, which saw the Bees go into half-time with a two-goal lead.

Van Dijk managed to make it to the interval without needing to come off and it was hoped that his removal prevented any significant damage.

However, according to the Times, the defender is now set for a spell on the sidelines as his injury is more significant than first feared.

Liverpool put together back-to-back wins after Christmas and headed into their clash against the Bees in good form.

However, the Reds’ displayed their early season form in north-west London with a worrying display that leaves them trailing Manchester United in fourth by seven points.

Cody Gakpo has arrived from PSV to strengthen Liverpool’s attack but Jurgen Klopp must now rely on the injury-prone Joel Matip, Joe Gomez and Ibrahima Konate in Van Dijk’s absence.

The Reds take on Wolves in the third round of the FA Cup this weekend, before travelling to in-form Brighton in the Premier League.