Liverpool manager Juergen Klopp had just seen his team fall behind after getting outplayed in the opening 25 minutes by a supposed contender for relegation, and he'dd had enough.

“WAKE UP!” Klopp barked to his players, his chest out and his teeth gritted. 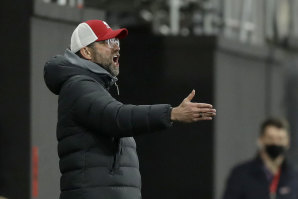 A frustrated Juergen Klopp during Liverpool’s 1-1 Premier League draw with Everton in London.Credit:AP

Liverpool ended up escaping from Craven Cottage with a 1-1 draw against Fulham thanks to a late penalty by Mohamed Salah but it was hardly the stuff of champions from Klopp’s team.

They weren’t alone, in what has proved a tough weekend for the Premier League’s likely title candidates.

Earlier Sunday, Tottenham, the league leaders, were held to a 1-1 draw by Crystal Palace.

On Saturday, Chelsea lost for just the second time in the league this season, 1-0 at Everton, and the two Manchester clubs played out a drab 0-0 draw at Old Trafford. 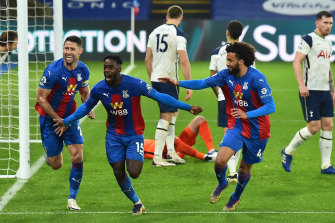 If this was some kind of hangover from the teams’ latest mid-week exertions in European competition, then the schedule is only going to get more hectic now English football is entering the festive period when the show goes on unlike many leagues on the continent.

“I don’t want to make excuses — I’ll let you all talk about that and the amount of games players are playing, especially European teams,” Liverpool captain Jordan Henderson said. “We’ve just got to prepare and play whenever we’re told. That’s all we can do.”

As it was, there was no harm done by the champions for what was one of their sloppiest displays of the season.

Liverpool ended the week in second place after 12 games, tied on 25 points with Tottenham.

The pair meet at Anfield on Wednesday in the headline fixture in a mid-week round of games in the Premier League where rotation might be heavy across the division.

Salah moved to 13 goals for the season in all competitions with Liverpool’s 79th-minute equaliser at Fulham, with the Egypt forward scoring for the third straight game.

Liverpool looked to be heading for the second loss of their title defence, when a shot by Georginio Wijnaldum at a free kick struck the outstretched elbow of Fulham substitute Aboubakar Kamara, who was jumping in the defensive wall.

A penalty was awarded and Salah struck his attempt low and down the middle, with goalkeeper Alphonse Areola getting a hand to the ball but unable to keep it out.

Bobby Decordova-Reid gave Fulham the lead in the 25th minute with one of a series of chances created by the home team in a one-sided first half.

Liverpool played the second half with two central midfielders — Fabinho and Henderson — at centre-back after Joel Matip went off with a back issue. Matip had been the only fit, senior centre-alf available to Klopp, with Virgil van Dijk and Joe Gomez out with long-term injuries.

They teamed up for a goal for the 12th time this season, as Kane opened the scoring for Tottenham at Palace by collecting a pass from Son and smashing a fierce, swerving shot from about 30 metres that goalkeeper Vicente Guaita lost track of.

Only Alan Shearer and Chris Sutton, with 13, have combined for more goals in a single top-flight season than Kane and Son. That came in the 1994-95 title-winning campaign for Blackburn. 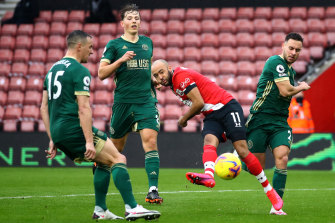 Guaita made amends with two outstanding saves, denying first Kane and then Eric Dier at a free kick, to preserve a point for Palace after Jeffrey Schlupp’s 81st-minute equaliser at Selhurst Park.

Tottenham’s only loss this season remains against Everton on the opening weekend.

Sheffield United, meanwhile, became the first Premier League team since Queens Park Rangers in 2012 to fail to win any of their first 12 games in a season after losing 3-0 at Southampton.

Southampton, meanwhile, are the beneficiaries of the poor returns this weekend from the league powerhouses and have climbed into the top four, just two points behind Tottenham and Liverpool.

Davide Zappacosta close to joining Roma on loan from Chelsea

Arsenal ‘let the fans down’ during defeat by Tottenham, admits Rob Holding