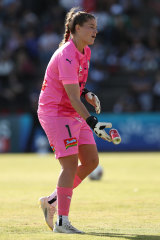 Teagan Micah removes a can that was thrown onto the pitch in City’s second clash against Victory.Credit:Getty Images

Melbourne City’s W-League goalkeeper Teagan Micah has urged soccer bosses to step up security at suburban grounds to protect players in the wake of the bottle-throwing barrage she faced against Melbourne Victory in a fixture at Epping last month.

Micah was on the receiving end as Victory fans hurled cans, bottles and abuse in the closing minutes as City beat Victory 3-2 in a thrilling derby in January, reversing a 6-0 defeat just seven days earlier.

“I think that it just wasn’t good enough in terms of the league having our back and making us feel safe,” Micah said ahead of City’s clash against Sydney on Thursday night. It will be the club’s first competitive home game in the south-east region of Melbourne, which it is ultimately planning to call home.

“You don’t ever deserve to feel unsafe in your work environment.”

Micah has made a statement to the players’ union and is anxious that lessons from her chilling experience are learnt so that such scenes are not repeated at any other grounds.

Asked if she had concerns about playing at a suburban venue again – this match will be played at Dandenong City’s ground, a much more intimate venue than AAMI Park, where Micah played for City in the loss to Brisbane last Sunday – the aspiring Matildas shotstopper said “no, I hope not”.

But she wants to see more protection and security.

“I hope the league can learn from what happened and up the security. Personally I just want to focus on the game. The people who are meant to be dealing with that are still dealing with it.

“My job is [looking] forward and not turning ’round looking into the stands. We are all human and it does affect you when you have things thrown at you, but you just try to stay in the game.

“I have given my statement to the PFA and they are working hard daily in fighting for me.

“It did get to me and it was sad because it was a very good win and we had turned it around and won 3-2 against a team that seven days earlier had pumped us 6-0.

“I think that could have been been the headline instead of the people that really spoiled the party for us, but at the end of the day we took the three points.

“The PFA are trying to work for a solution, whether it is more security, trying to figure out what went on, how glass got into the venue, there are so many different things.

“But I have told them what’s happened and given them my statement so for now, for it’s just about Sydney FC and the game.”

City last year won the W-League title but lost virtually all of their championship-winning squad in the off-season, so have struggled this campaign.

They currently sit seventh on the table with just four points from six games, but Micah is still upbeat about the chances of grabbing a finals berth.

“I have got a good gut feeling that we can turn things ’round,” she said.

“I think from round one to now we have improved out of sight. As long as we can keep improving each game, which I think we have been, we can still turn this season ’round.”

Micah, who has been in fantastic form this season when she has kept her team in games almost single handedly, is excited by the prospect of facing last season’s beaten grand finalists.

“They have been in their little bubble playing Wanderers and Newcastle.

“We have had more games and been put into a lot more difficult situations than they have been in terms of being exposed to adversity in games, so hopefully that really helps us tomorrow.”

The only City absentee will be suspended defender Sam Johnson.

Jerome Boateng would offer Chelsea and Arsenal a wealth of experience

United coach Fortune was blown away by Greenwood's training displays