It is not often that Liverpool flatter to deceive these days but this was one of those rare matches in this enormously promising season when the pretty numbers and records concealed something a little more gritty.

That is not a glaring criticism as such – great virtue in winning ugly, and all that. But for a long time, around 67 minutes in fact, this was harder than it might have been. So much so that Watford have the right to wonder.

What of the call by Jonathan Moss 10 minutes into the second half? Watford were second best by that point and were for just about the entirety of the match, but at 0-0 Andrew Robertson appeared to foul Will Hughes in the area and nothing was given. 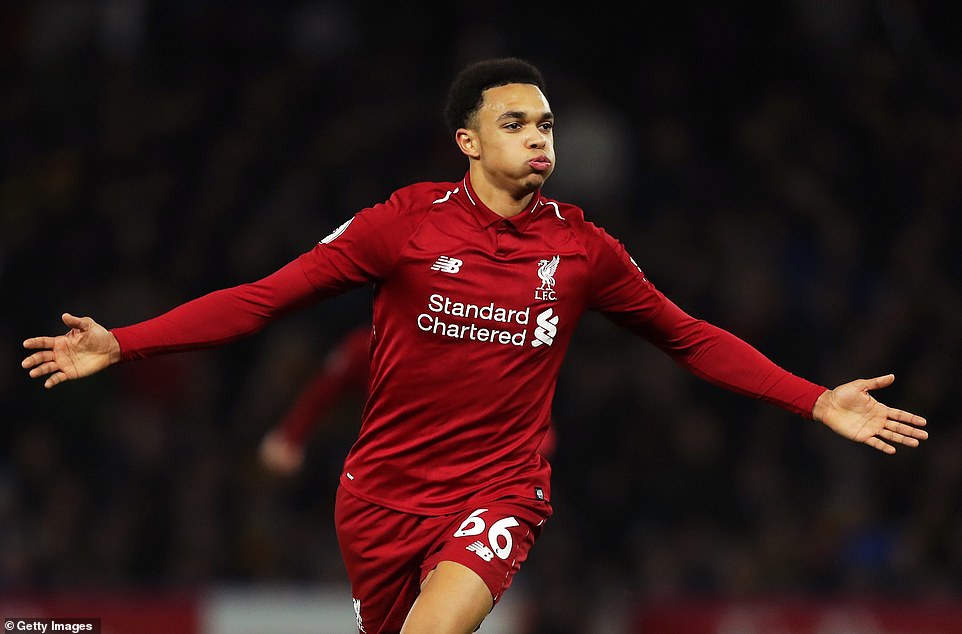 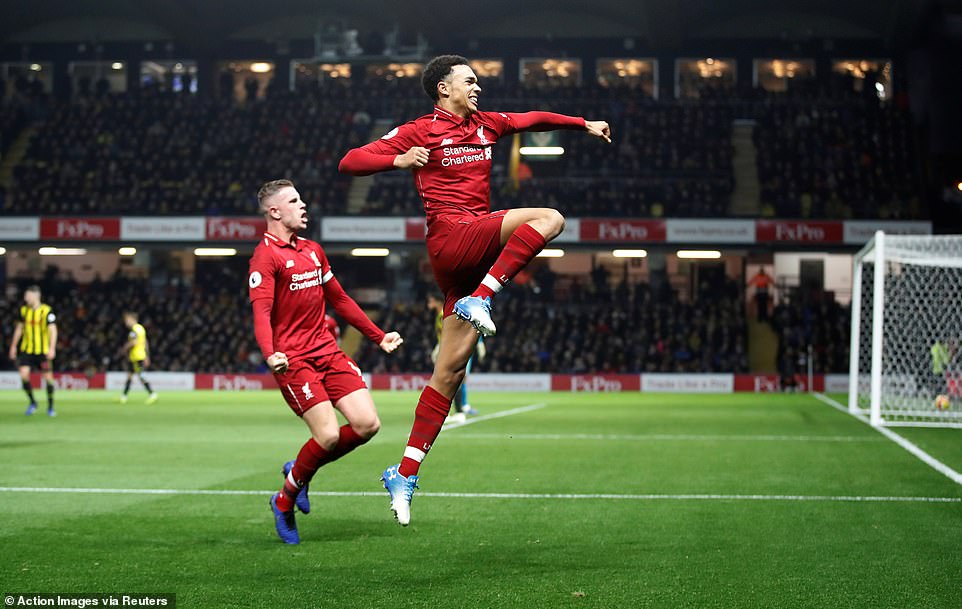 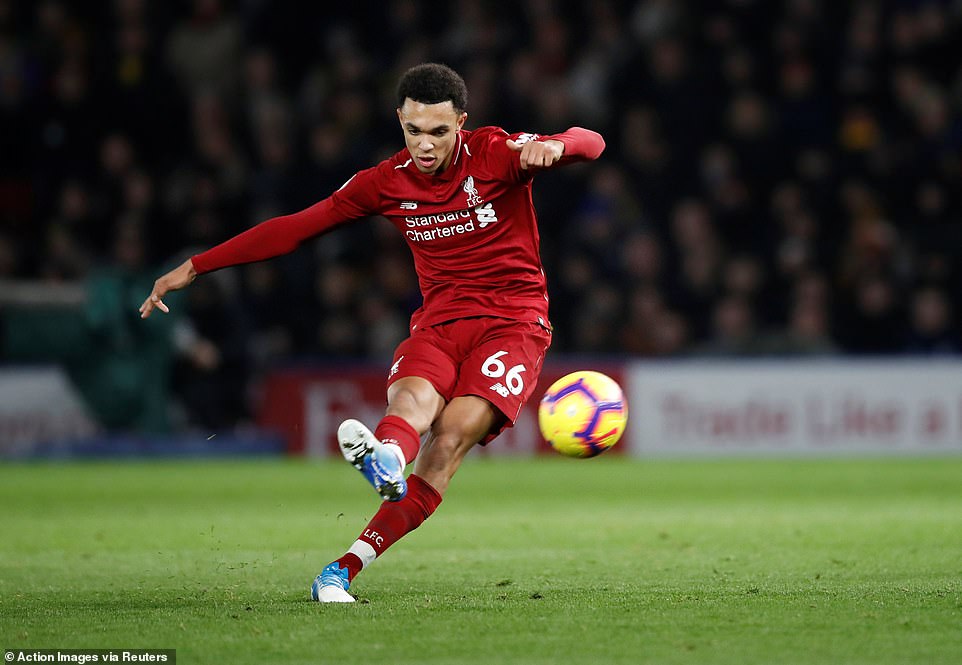 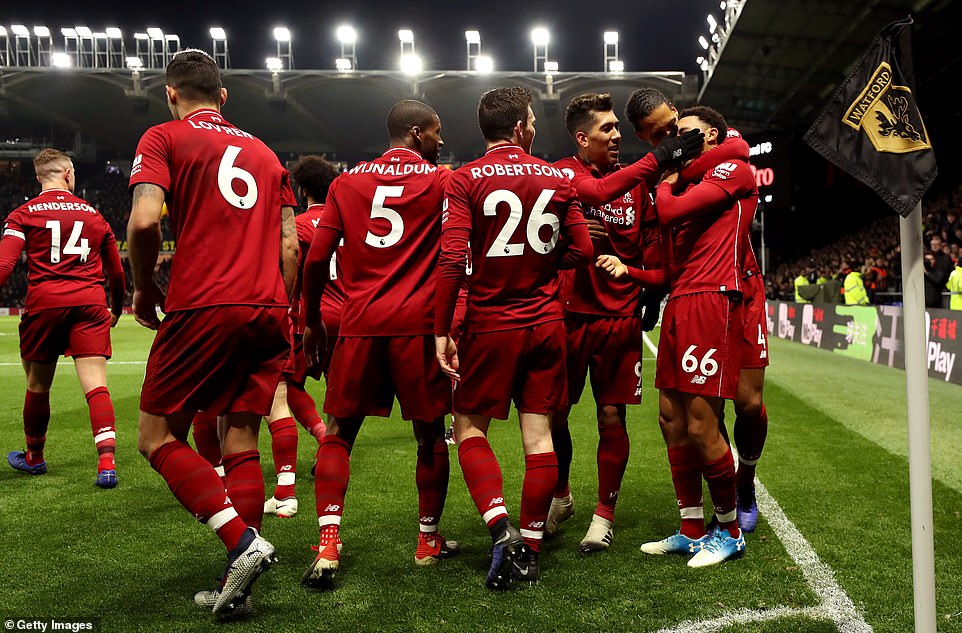 It looked harsh based on restricted replays and it must have felt like a kick in the teeth for one of the division’s most impressive performers that they were subsequently pummelled by three goals, two of which were quite sublime.

The first, finished by Mo Salah on 67 minutes, was a tribute to stunning team play. With nine goals in all competitions, his season is not necessarily as underwhelming as we sometimes believe it to be. The second goal was all about the power of the individual, in this case Trent Alexander-Arnold, who scored a quite sublime free-kick. Roberto Firmino finished it off with a late header.

All in all, it was a comfortable win, and yet it was also a shakier performance than we have grown accustomed to from Jurgen Klopp’s side. They struggled badly in the midfield in the first half and in the second Jordan Henderson was sent off for a second yellow card – he will now miss next week’s Merseyside derby. The defence was also weak on occasional, barring Virgil van Dijk who produced another faultless performance against a team with five wins in seven home games.

Good numbers for Watford, irrespective of this one going south. The numbers for Liverpool are far better and indicative of why this is turning into a special campaign. Klopp’s side have now kept 12 clean sheets in their last 18 league games – a measure of the defensive progress there is that they started last season by conceding three at this ground.

On another score, Liverpool have 33 points from 13 games—their highest-ever tally in the Premier League era and, of course, remain unbeaten. It’s deeply impressive, even if this was not the best showcase of what they do. 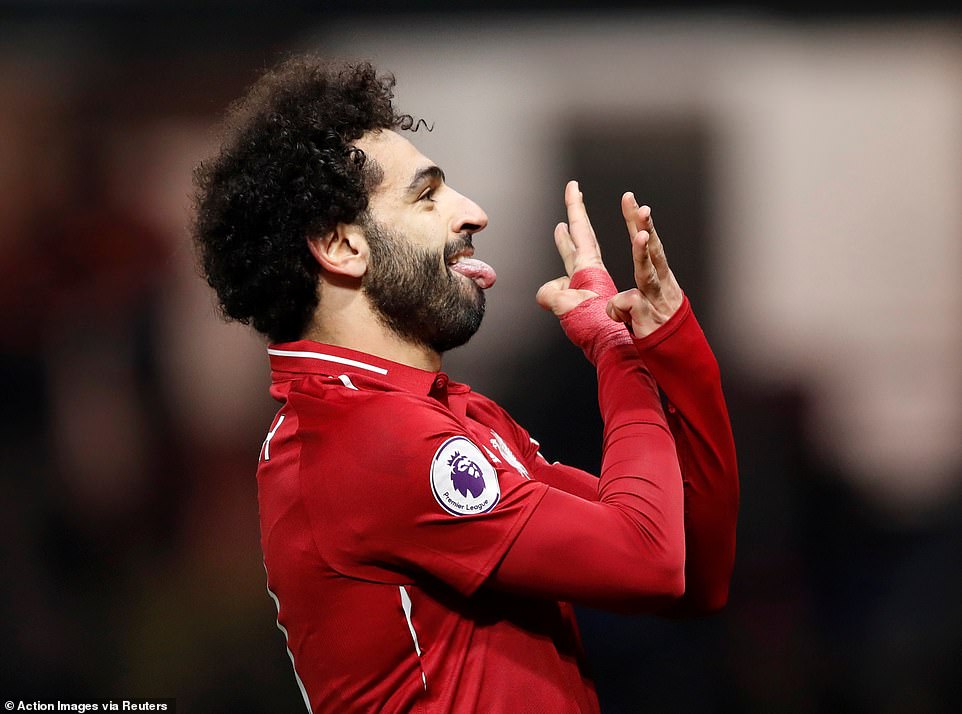 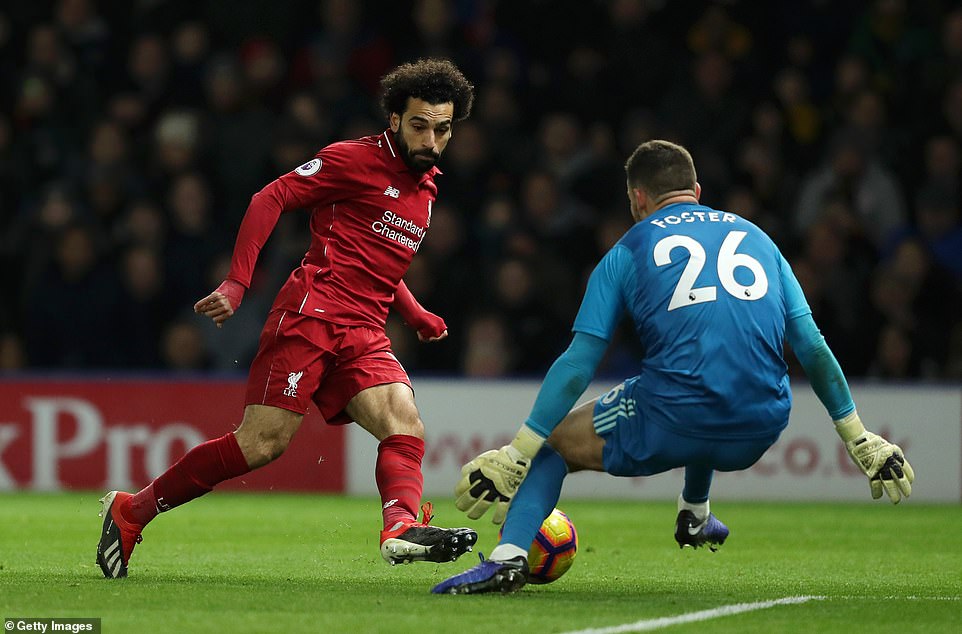 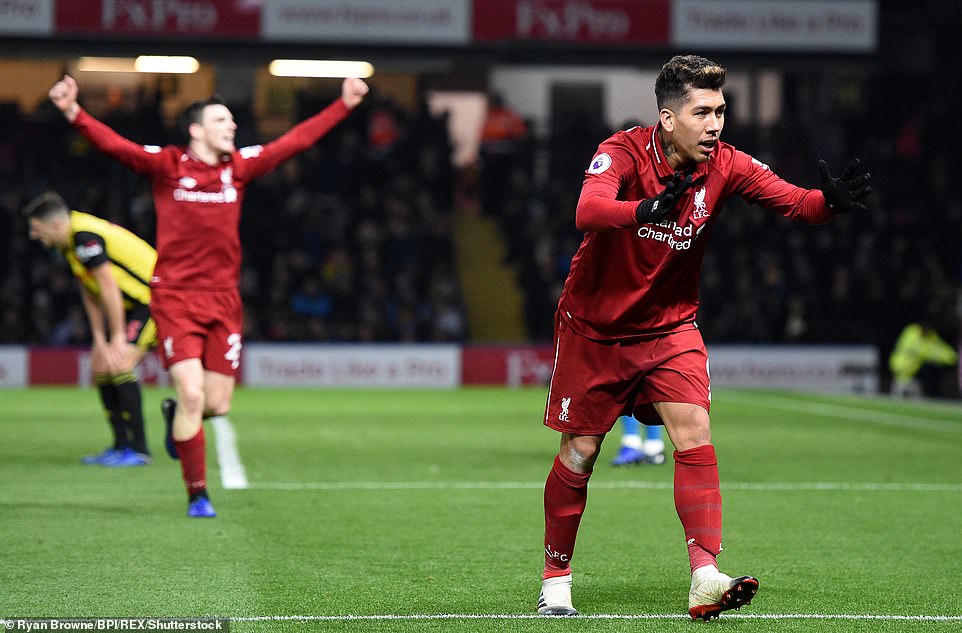 Roberto Firmino celebrates his goal, which ensured Liverpool managed to take all three points against Watford 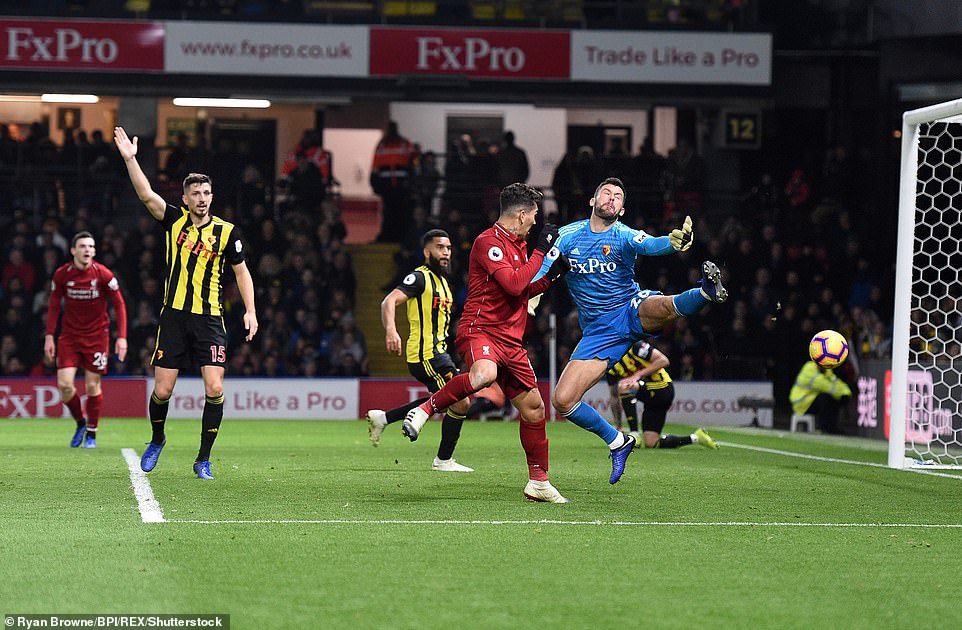 The first half was largely wretched, save for the final five minutes when Liverpool produced three decent chances in a concentrated flurry and Watford had a decent effort of their own. Ahead of that burst of life, the most notable observation was that the Liverpool side coming out of the international break had only a little of the verve or solidity of the one that went into it.

The midfield, with the exception of Xherdan Shaqiri, was particularly culpable in both regards. Jordan Henderson, back for a first start in a month after his hamstring difficulties, was a shade off the pace in the attacks and together with Georginio Wijnaldum offered a less than effective screen for the defence as well.

In the opening two minutes Gerard Deulofeu had a goal rightly disallowed for offside after Watford built a strong position and a moment later the same player almost found a way through after a risky ball from Alisson put Roberto Firmino in danger next to his own area. Not exactly alarming and yet hardly the kind of vulnerabilities you’d expect in Klopp’s team this season.

The respite came from Shaqiri. His colleagues didn’t chip much into the creative effort, but he was sharp, aggressive and repeatedly the best catalyst for Liverpool until his substitution, with all three of their three best openings in the first 45 minutes coming from his work. 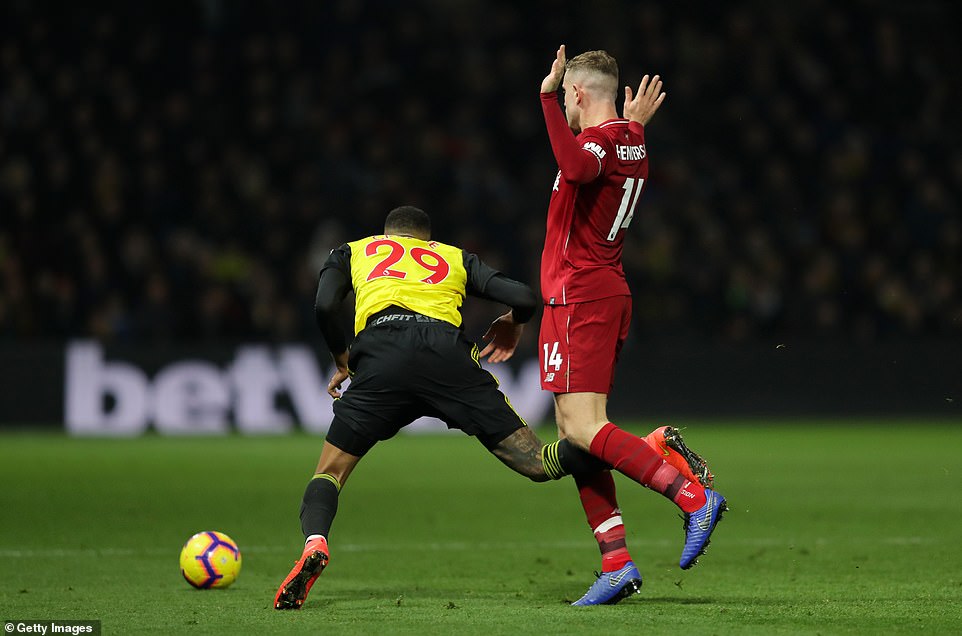 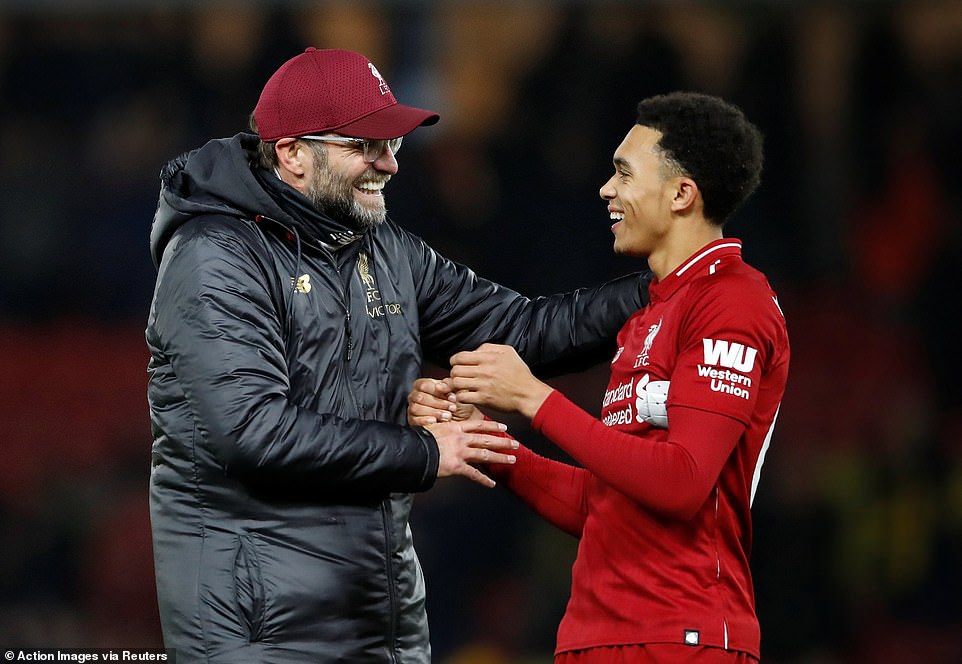 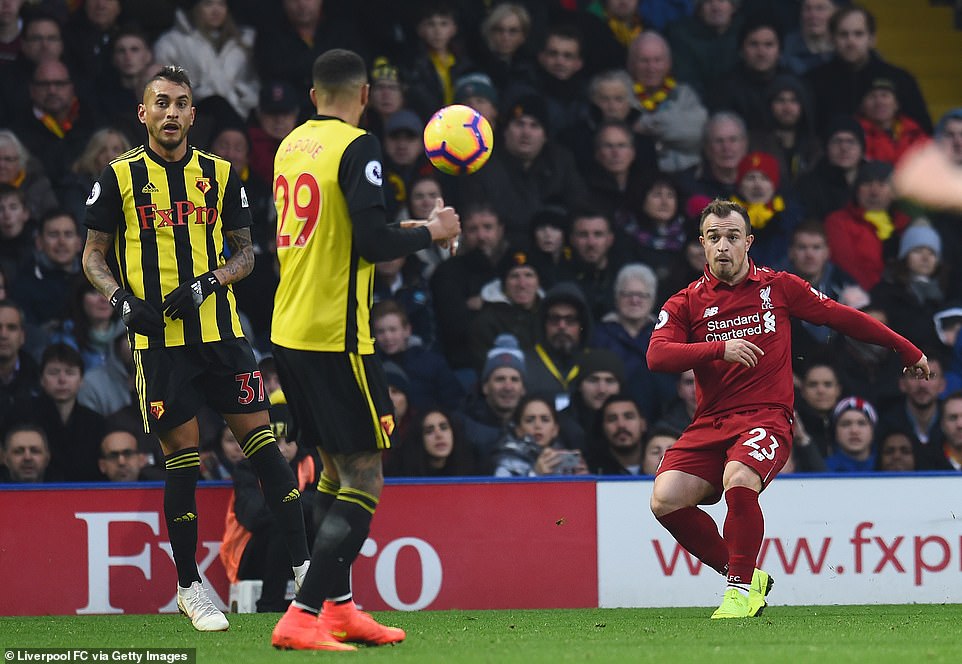 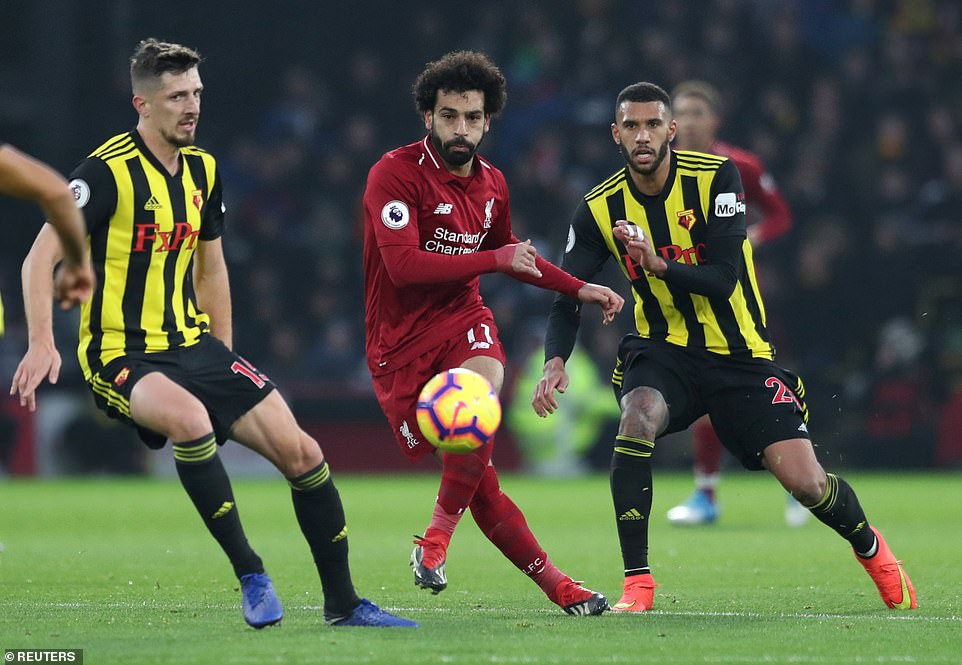 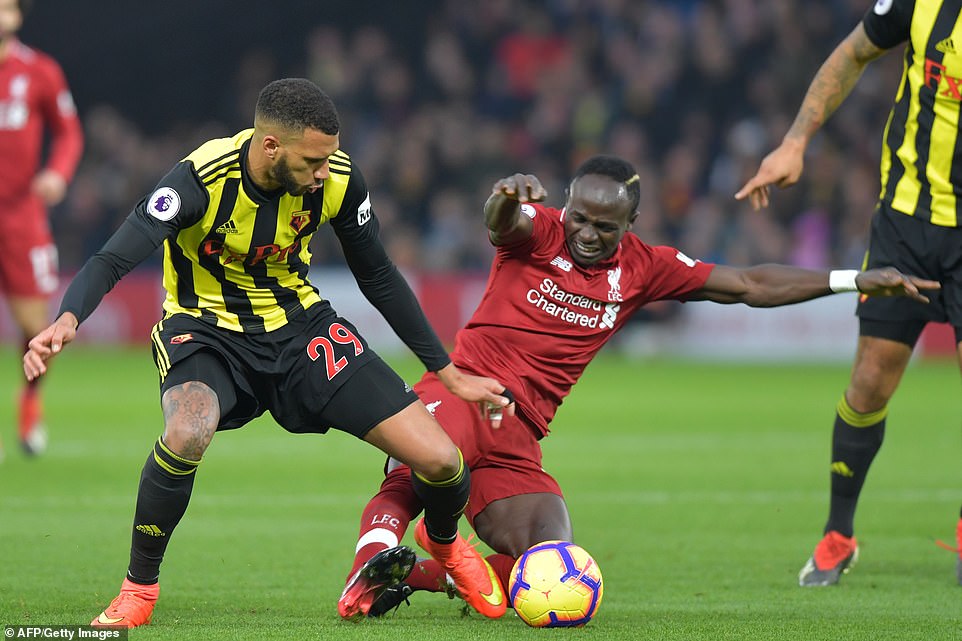 In the first instance, it was a dipping in-swinger of a cross to Mo Salah that had Ben Foster in a panic. The Watford keeper was almost beaten by the delivery in flight but was able to get enough of a finger on the ball to divert it away from Salah at the far post.

A second throughball on 41 minutes made a chance for Sadio Mane that was well saved by Foster and from the resulting Shaqiri corner Salah had a header blocked. 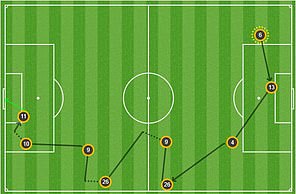 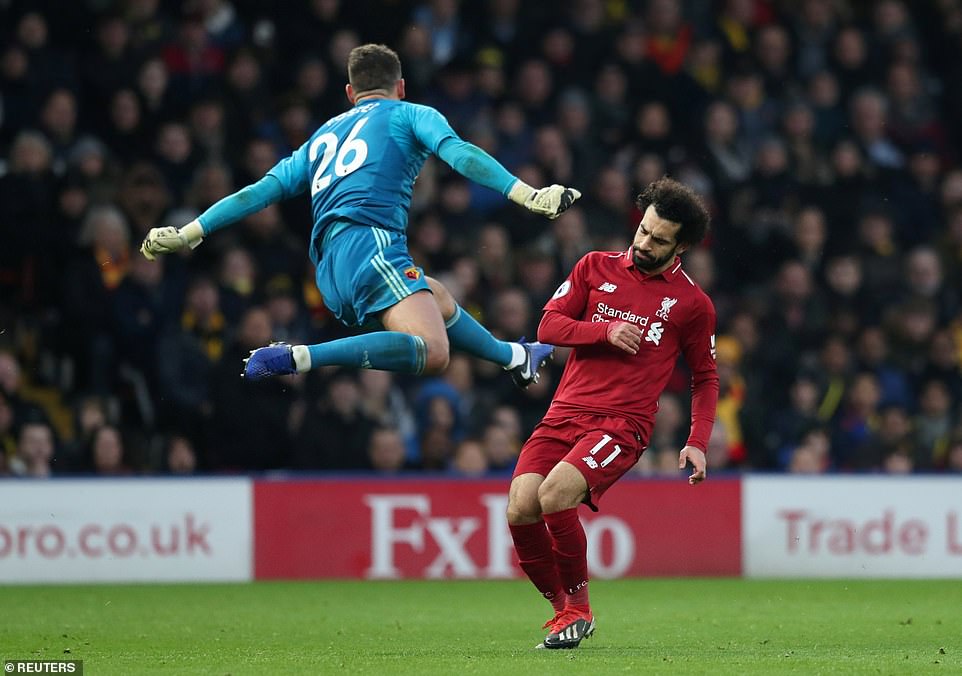 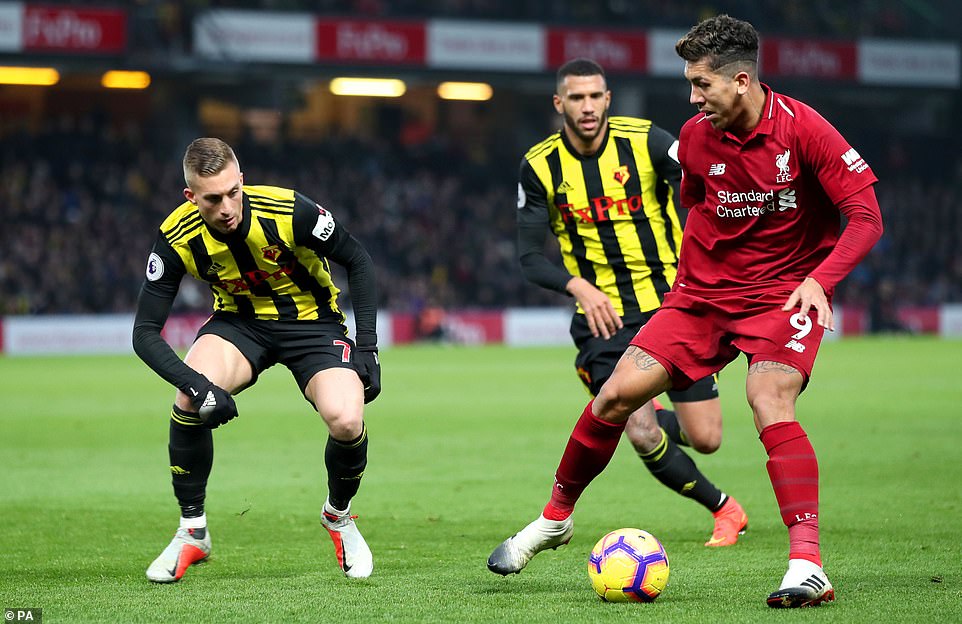 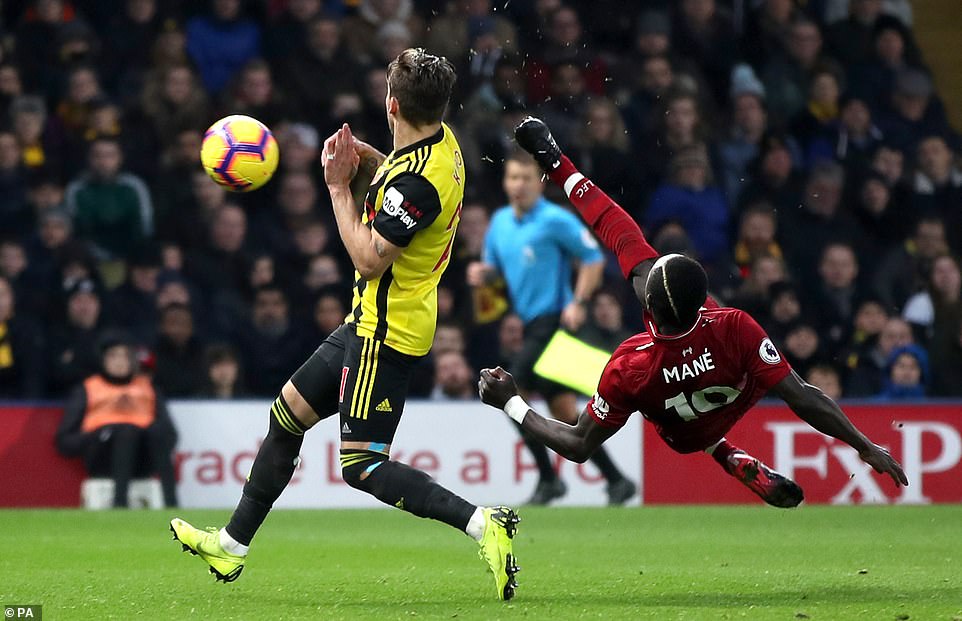 Among those few chances, Watford had arguably the best attack of the bunch, with Liverpool exposed by a Dejan Lovren slip before the ball was rotated to Roberto Pereyra with a decent sight of goal. He shot with the outside of his boot and Alisson saved. Had Virgil van Dijk not been so solid, then it is a certainty that Watford would have had more than that to show for their half.

The second period had more of a pulse. Far more. Watford had an appeal for a penalty rejected, which appeared fortuitous for Liverpool after limited initial replays indicated that Andrew Robertson had clattered Will Hughes in the shin. 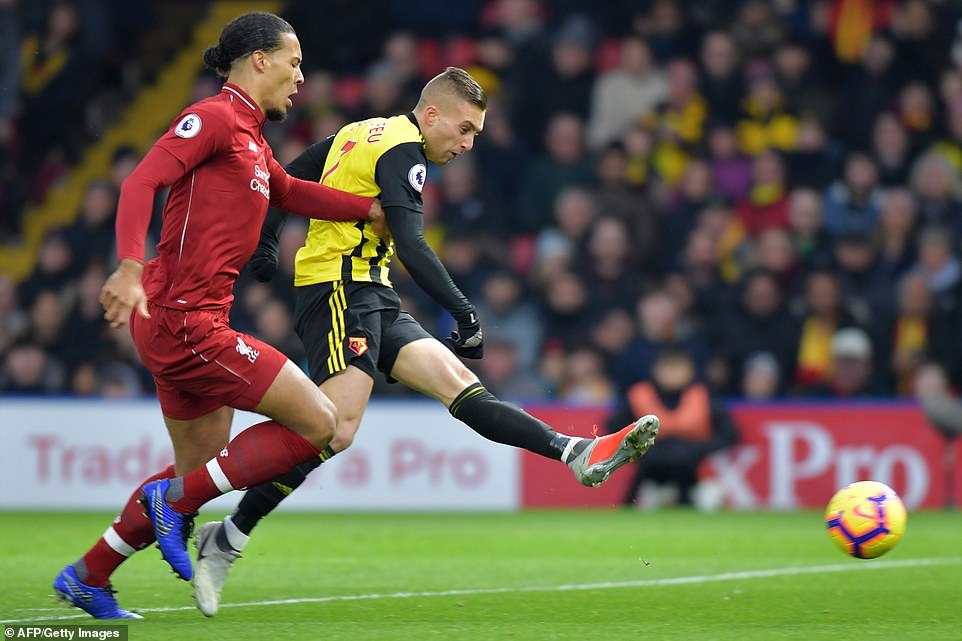 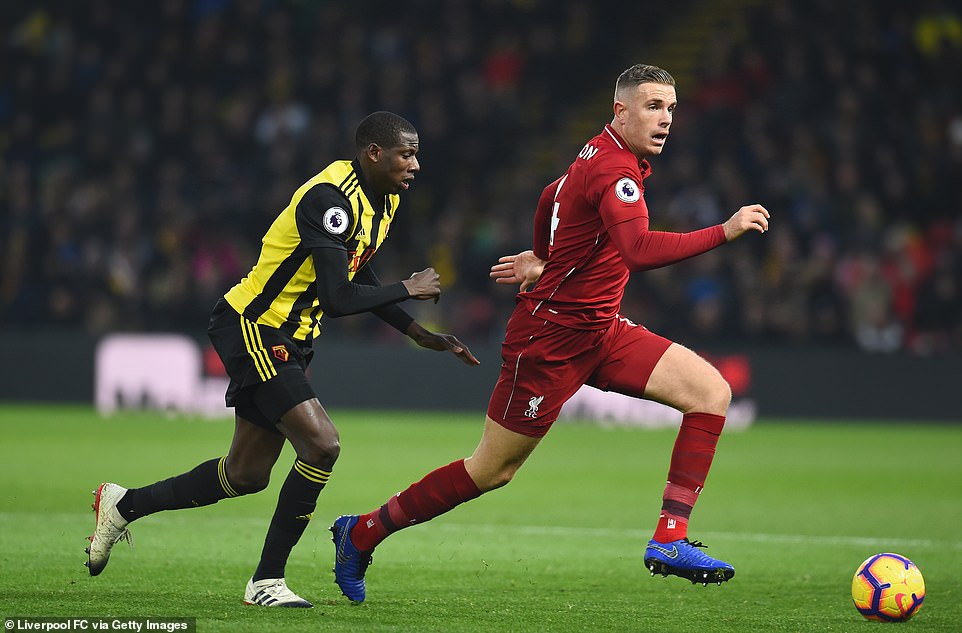 From there, Liverpool made the most of their second life. The opening goal was delightful in the scale of its creation, with Robertson carrying the ball deep into Watford’s half before playing out to Roberto Firmino, who broke the defensive line with a pass of perfect weight into the path of Mane. His cut back went straight to Salah and he finished for his ninth goal of the season in all competitions. He has not been at his best in this campaign, but with six goals in six games across the league and European fixtures, it is hard to buy too firmly into reactionary arguments about his longevity.

Alexander-Arnold got the second nine minutes later and it was really quite something. From 25 yards out he found the top right corner. A stunning strike.

Firmino wrapped it up by squeezing a header past Foster after the latter pulled off a good save from Mane, though a layer of gloss was stripped off between the goals when Henderson was shown his second yellow card in the space of 22 minutes for a foul on Etienne Capoue. He will now miss the derby game with Everton next weekend. 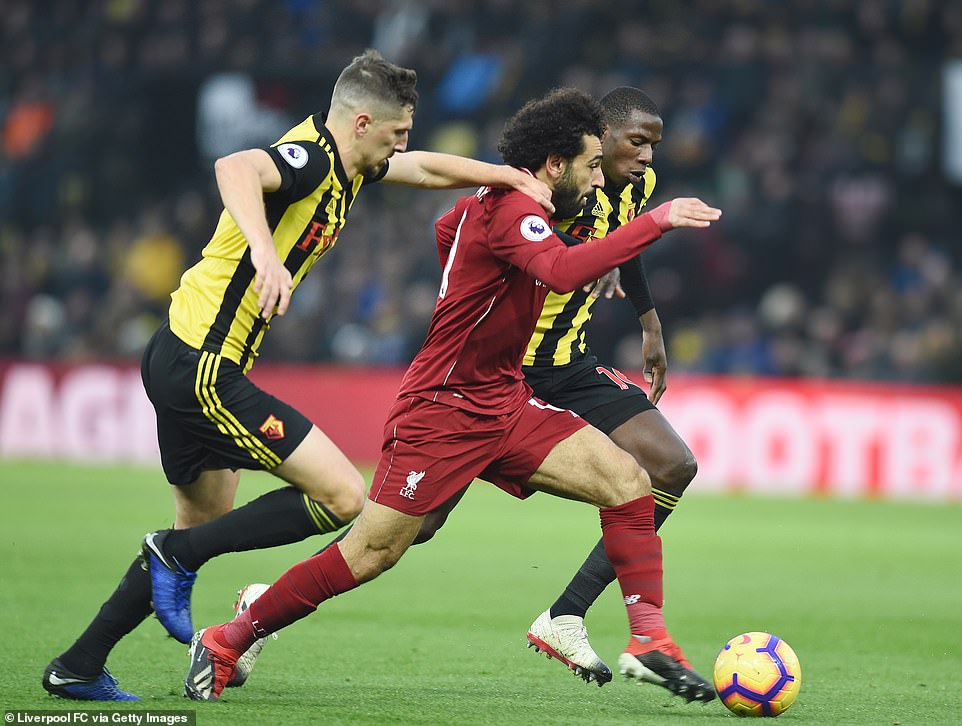 Watford try and restrict the influence of Salah, with Cathcart and Doucoure closing the Egypt international down 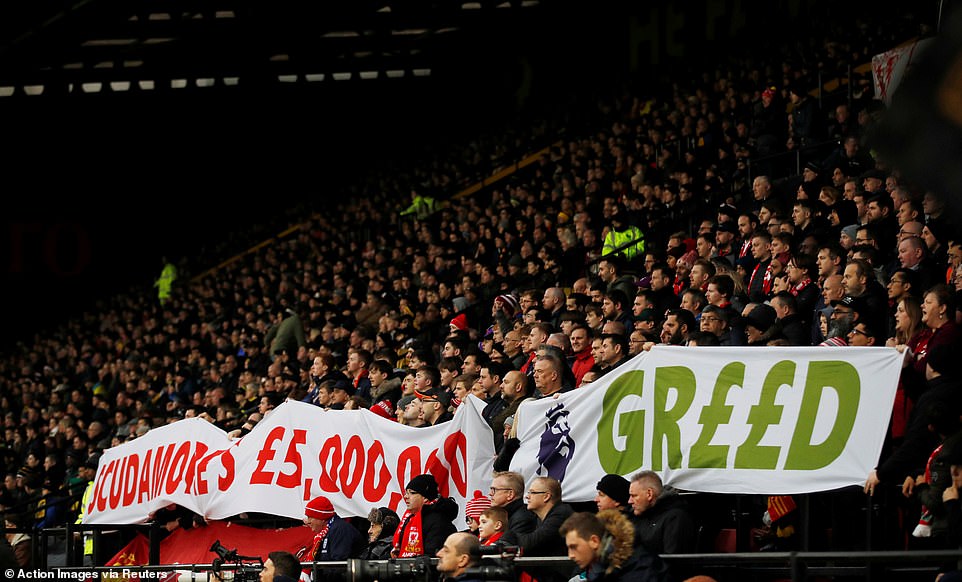 Arsenal news: Will Mikel Arteta be at Everton vs Arsenal today? When does he start?