At a time when football grounds have closed their doors, we’ve asked Martin Tyler to share some of his favourite facts and memories of the homes of the 20 Premier League clubs.

In part 18 of the series, Sky Sports’ Voice of Football takes us on a virtual visit to Watford’s Vicarage Road and reflects on the brightness of their historic ground.

Keep an eye on the Football Show on Sky Sports News and @SkySportsPL on Twitter for some special Tyler’s Teasers. Today’s question is all about players to have played for Watford and have won the title.

Vicarage Road: How I get there

Barring congestion on the M25, it is a quick trip for me, just seven junctions. Vicarage Road is protected by some draconian parking regulations, so I have to make sure of one of the spots allowed at the ground for the television crew.

The position is like many used to be before the expansion of grounds – via a ladder and then a gangway out to the platform itself. Very close. Very atmospheric. Very enjoyable.

At Vicarage Road, Watford moved from the fourth tier to the top flight in five seasons, under the management of Graham Taylor and the chairmanship of Elton John.

In their first season in the elite level, 1982/83, they finished runners-up to Liverpool and striker Luther Blissett was the leading scorer in the top division with 27 goals.

My memories of Vicarage Road 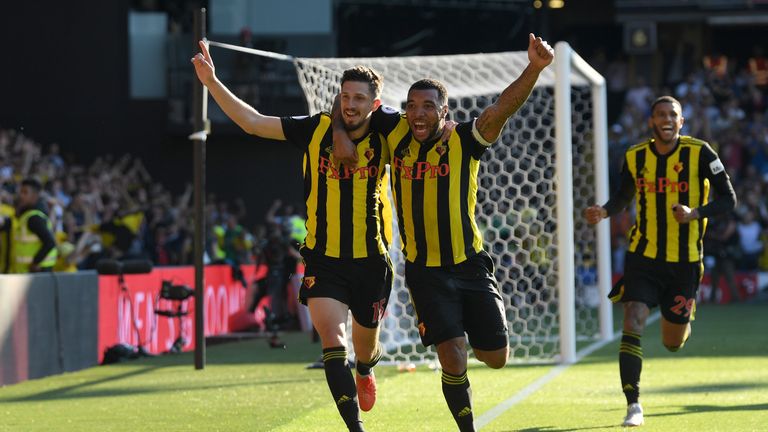 Watford started the 2018/19 season with four straight Premier League wins and Sky Sports was on hand to capture the fourth, at home to Tottenham Hotspur. Though Watford is inside the M25, it does not officially count as a London club, but the rivalry with the north London giants Spurs and Arsenal is strong.

Both clubs went into this Super Sunday clash with 100 per cent records. Indeed Tottenham were fresh from a 3-0 win at Manchester United on the previous Monday. Watford had hit the ground running with home wins against Brighton and Crystal Palace and in between beat Burnley at Turf Moor.

For all their attacking talent, Spurs did not manage a shot on target in the first half but were presented with the lead early in the second through an Abdoulaye Doucoure own goal, one of those pinball penalty area moments which I needed a replay to sort out.

Much more clear-cut were the two Watford goals in a seven-minute spell which gave the Hornets their best-ever start to a Premier League campaign. Two set-pieces turned the tide. Troy Deeney, at his rampant best, forced a corner and then converted it. Defender Craig Cathcart headed in the winner as Tottenham’s vulnerability at dead-ball situations was exposed again.

It was an early indication that Watford were in for a special season under the likeable Javi Gracia. During it he took the club to only their second FA Cup final.

At the start of that run I found myself in the very unusual position of watching them from the opposition dugout, as an assistant manager.

Woking’s third-round tie at home to the Hornets formed a strong bond with the Premier League club. Watford were very respectful of our non-League status and generous in the business between the two clubs – and they had to bring on Deeney to settle the match!

There is an actual brightness about it when you arrive before the fans come in. The colour scheme of red and yellow on the empty seats creates a sense of optimism which is reflected in the way the club is run.

I also have huge respect for the way Watford recognises the massive contributions of the late Graham Taylor, whose management at Vicarage Road took a struggling club into the footballing stratosphere. He was a remarkable man. The stand which houses the television gantry is named after him.

There is always the possibility too of a sighting of Sir Elton John, another giant contributor to Watford’s development, though he understandably likes to keep a low profile. He too is recognised by part of the ground bearing his name.