‘I know former players who don’t like it that England are now doing so well… that’s wrong’: Wayne Rooney reveals jealousy over success of current stars

It is one thing to accept that your time is over, quite another to acknowledge that the coming generation is doing even better without you.

As such, it would be wrong to dismiss the enthusiasm with which Wayne Rooney is embracing this current England team.

It might seem natural to be excited about the vibrancy Gareth Southgate has evoked in the national side, especially after the generous farewell Rooney was given at Wembley on Thursday. 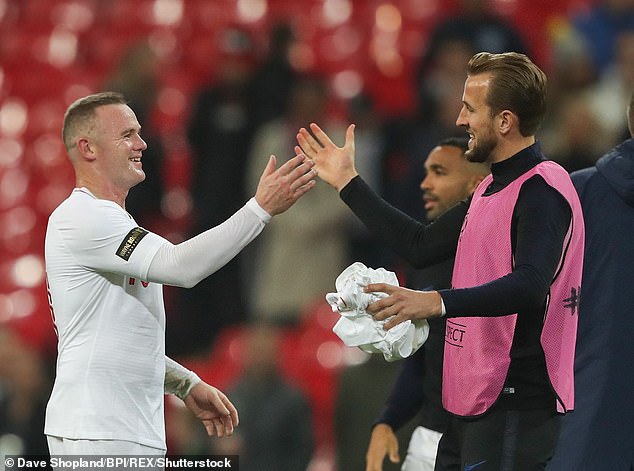 Yet there is another potential reaction to the vivacity this group are generating, especially if you might once have been part of it but are no longer. It is just as common to resent success achieved by those other than yourself.

‘I know there are some ex-players who I’ve spoken to who can’t come to terms with England doing well,’ said Rooney, confirming that not all his former England colleagues are at ease with the fact that this group has outshone every team since 1990.

‘That is wrong. I’m not like that. I’m a fan now. I want England to do well. I’m proud to have played for England so many times and I always have been.’

Of course, Rooney would be inhuman if some part of him did not wish this had all come along two years ago or, more realistically, when he was closer to his prime, four years ago.

The 2014 World Cup was a calamity for the England team but blame could not be laid on the captain in that instance. But there it is. His England day is done.

‘I’ve had my time,’ he said. ‘I’m happy with what I’ve contributed to the national team and I look forward now to the next few years and watching this team progress. I’ve enjoyed being around Gareth, the players, the coaching staff and seeing how it’s all developing. And the game [against the US on Thursday] was great.’ 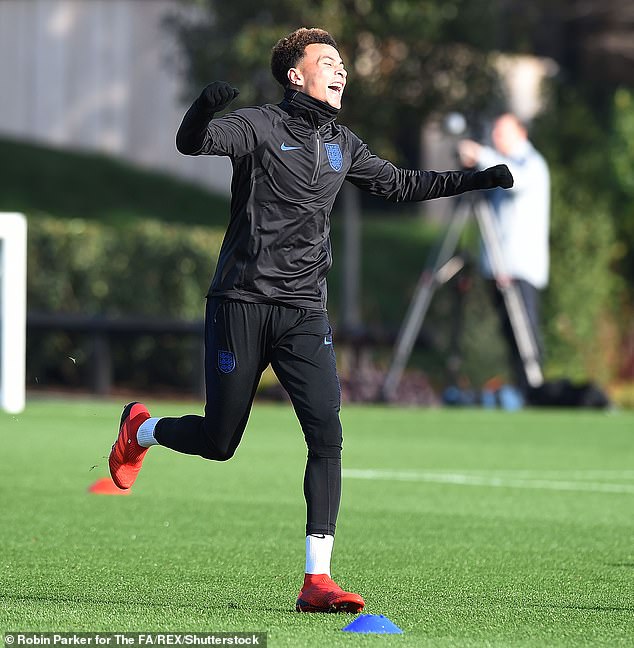 For some, Rooney will always be a hothead incapable of such perspective because his public image was forged when he was so young and is seared irrevocably in the minds of so many – but Rooney at 33 is a reflective individual, necessarily more mature and genuinely seems to be at peace with his change of status.

This is the generation to take the baton on. On Sunday they can qualify for a summer tournament and the opportunity to win the UEFA Nations League. Defeat Croatia at Wembley (and lest Luka Modric get the wrong idea, that is no easy task against the World Cup finalists) and England will have qualified for the Nations League semi-finals.

In short, they will be a game away from an official international final, two games away from winning something.

Scoff all you like, but a team who have not been in a final, let alone won a trophy, since 1966 cannot afford to be fussy about which tournaments they choose to take seriously.

‘The Nations League is new and people have different opinions — just like they had with my appearance against the US,’ said Rooney, neatly drawing attention to the critics of this innovation.

‘At the moment, it isn’t the biggest tournament but it could become big and it could be the stepping stone for a lot of countries over the next 10 to 15 years. To win any trophy for England is great and if they can do that I’m sure everyone will be delighted.’ 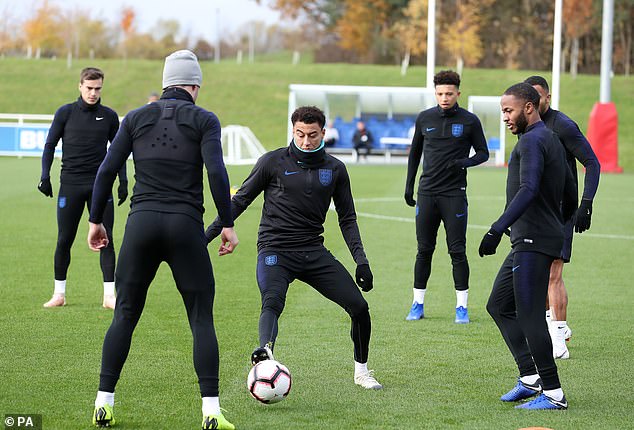 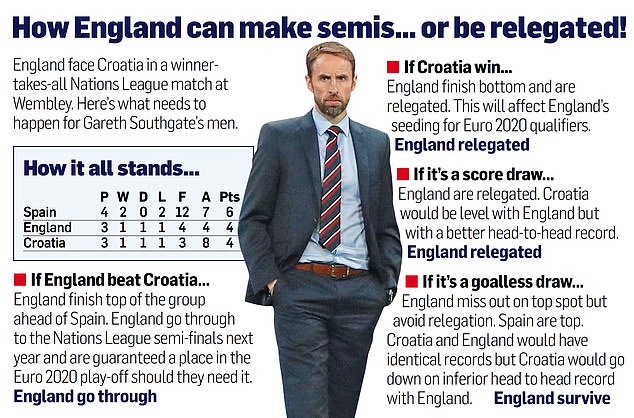 Rooney, of course, spent 13 years playing for England to earn Thursday’s tribute; 120 caps, the most for an outfield player and a record 53 goals. At times it was exhilarating (Euro 2004) and at other times awful (Euro 2016). Between 2010 and 2014 he carried a team whose players were fading and waiting for an emerging generation to support them, one which never came until now.

In that time he never came close to a trophy. He never even made a semi-final. Probably the best team he played in and the great missed opportunity came when he was 18 years old at Euro 2004, when an enormously talented group of players fell at the quarter-final stage to Portugal on penalties.

A team with a back four of Gary Neville, Sol Campbell, John Terry and Ashley Cole (Rio Ferdinand was suspended), a midfield of David Beckham, Frank Lampard, Steven Gerrard and Paul Scholes, with Rooney up front alongside Michael Owen should surely have achieved more.

‘I wouldn’t say I’ve got regret [over my England career],’ said Rooney. ‘The main thing is that I can look back and say to myself I gave everything. It didn’t always work. It didn’t always pay off. But I have given everything when playing for England and I’ve tried to make us successful.

‘Sometimes everything just isn’t enough. But no, I’ve got no regrets. I’ve had my time and it didn’t quite work out in terms of trophies. I’m happy with my international career and I’ll always look back and be proud of what I achieved for England.’ 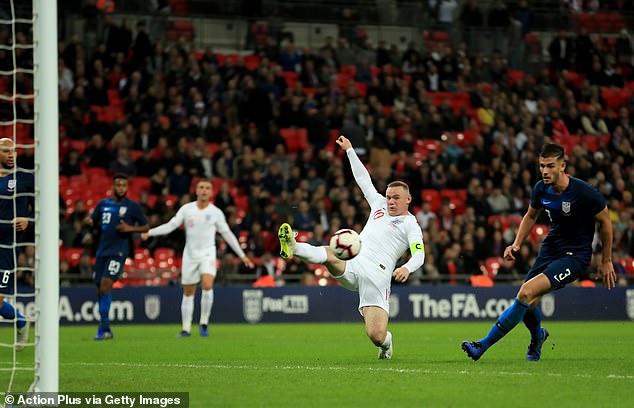 During Rooney’s 13-year career playing for England, he never came close to a trophy

It is an interpretation Rooney takes issue with, however. He would not want to foist the unwanted and unfulfilled moniker of the golden generation on another group of players.

‘The team I played in had superstars but this team also has also superstars,’ said Rooney. ‘Harry Kane, Raheem Sterling, John Stones — one of the best centre-backs in world football. This is a great squad, with other players who can come in if there are injuries. I have also seen first-hand that they are getting coached right and the players are responding well. Hopefully this team can be the one to bring a trophy home.

‘Everyone can see the potential in the team is huge. They have come off the back of a hugely successful World Cup. But in a strange way the game against Spain [3-2 last month in Seville] will give them even more confidence than what they did in the summer. That was massive, to win away in Spain.’

Of course, there was a Rooney throwback on Thursday and it came in the performance of an 18-year-old making his first start for England. Jadon Sancho was fearless and made a huge impact. It put you in mind of another 17-year-old starting for England for the first time, at the Stadium of Light in April 2003 — when Sancho had just turned three.

Was he surprised by Sancho’s ability to take the game on at such a raw age, Rooney was asked. Perhaps remembering himself at that age, he smiled. 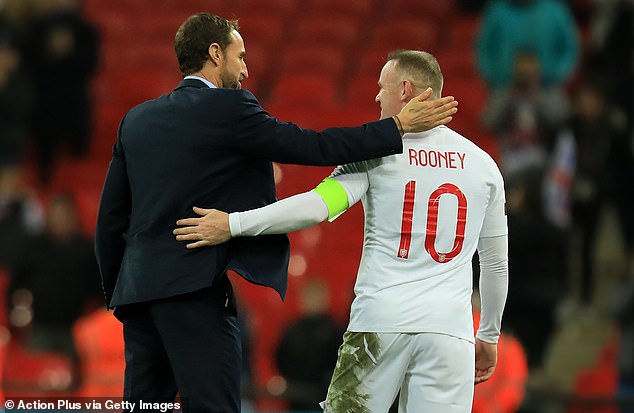 Rooney insists he has no regret over his international career, which lasted from 2003 to 2018

‘I’m not surprised by him,’ he said. ‘He’s a fantastic talent. I spoke to him before the game and he said he was nervous, which is normal, but the important thing for me was that he showed he isn’t afraid to make mistakes. He’s only 18. It happens. I told him to have an impact and a few moments that people will remember — and he certainly did.

‘I’m excited for Jadon. I’m excited for all of them, I’m excited for England. This is a great opportunity to make that next step. They’ve already got to a World Cup semi-final but they can’t sit back and be happy about doing what the 1990 team did. They have the potential to go further. The mentality is right and they’ll be pushing for more.’

Rooney had addressed the team in the dressing room at the end of the game. The theme of his team talk was along those lines, that there is an opportunity here to be taken should they care to seize it.

Harry Kane, the man who presented Rooney with his commemorative plaque on Thursday and the man Rooney expects to break his goal-scoring record, says the current squad appreciated his input.

‘It was great to hear him talk about us and how proud he was of us in the summer. And even to come in and see what we’re doing and little changes here and there. To have someone like Wayne who is one of our best ever players to appreciate what we’re doing and see a future in us, it gives us more of a boost to go and do it.’

And Kane and the current squad fully appreciate the fact that a much more gilded set of players never reached a World Cup semi-final.

‘It shows how difficult it is,’ said Kane. ‘It’s not easy to get to a World Cup semi, as we know, Euros the same. Everyone has their own opinion on it on this competition. But for us it’s a chance to play a big semi-final against what looks like another top nation.’

Start with Croatia on Sunday and perhaps the UEFA Nations League might come into view. And the chance to win a trophy is not something England can choose to be picky about.