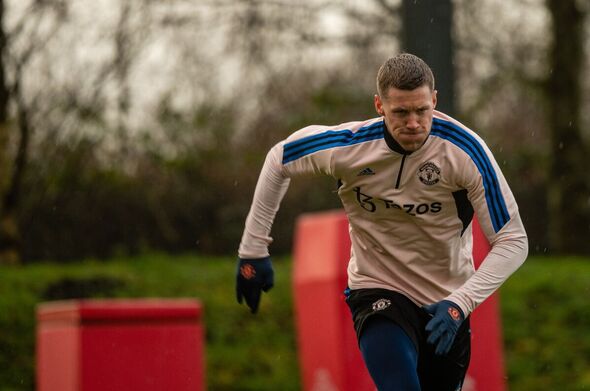 Manchester United new boy Wout Weghorst’s former coach Dean Whitehead is convinced that the Dutch striker will be a hit at Old Trafford due to his ‘elite’ mentality. Weghorst could be in line to make his debut for the Red Devils against Crystal Palace tonight after United agreed a loan deal to bring the player in from Burnley until the end of the season.

Whitehead, who is now the interim manager at Cardiff, had the chance to get a good look at Weghorst earlier in the season during his brief time on the coaching staff at Besiktas. There have been some who have questioned whether the Netherlands international is of the standard required to take United to the next level.

But speaking exclusively to Express Sport, Whitehead insisted that Weghorst’s attitude and technical ability will be a huge asset to manager Erik ten Hag. “Me and Wout are very close,” Whitehead said. “We have been speaking a lot over the move to United, and I worked very closely with him at Besiktas in training over finishing drills.

“He’s a top player, but above all his mentality is elite. He still believes he can be the best striker in the world, which is an incredible attitude for someone who started late in the game. He works non-stop throughout the day, and will give it all in the morning, then do drills afterwards, and then hit the gym. His mentality is top, top level.

“His level surprised me, to be honest. He’s technically brilliant with the ball at his feet. Despite his height, his weakness is probably in the air. Get the ball into his chest, into his feet, and he’s really good. His movement is excellent and I have no doubt he’ll score goals for Manchester United with the wingers they’ve got.”

Weghorst is known to be no shrinking violet off the pitch, as was evidenced by his clash with Lionel Messi following Netherlands’ bad-tempered World Cup quarter-final defeat to Argentina in Qatar. But Whitehead thinks his competitive nature should only be seen as a positive rather than a negative.

“Yeah he’s fiery, because wants to win,” the ex-Sunderland and Stoke midfielder continued. “If players aren’t doing something right on the training ground he’ll tell them, because he wants the standards to be top. But I don’t think that’s a weakness, I think that’s a strength, and it should see him fit in nicely at United.

“He’s delighted with the move. He would have liked to finish the job at Besiktas and win the Turkish League title, but to have the opportunity to go back to the Premier League with United – it doesn’t get much better.”

With Anthony Martial injured, it seems likely that Weghorst has a good chance to lead the line at Selhurst Park. And the player himself certainly seems confident he will be able to impress Ten Hag, telling the club’s official website: “I think that’s something that’s one of my strengths [pressing]. Especially without the ball, to put pressure on an opponent [and] be active.

“That’s something I am capable of and that’s also something in the way the trainer [Ten Hag] wants to play. He wants to play aggressive; he wants to go high on the pitch, try to recover the ball there, as quickly as possible, and I think I can help the team with that.”