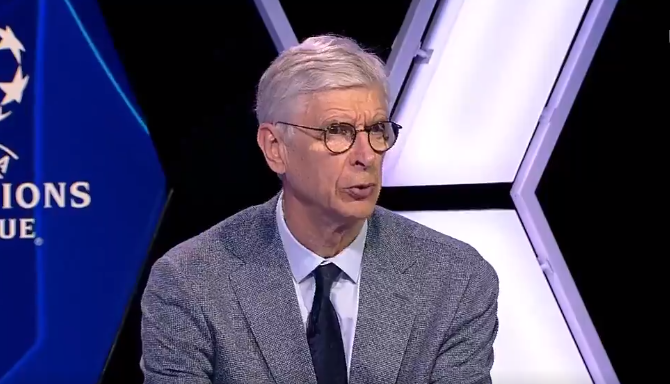 Arsene Wenger believes the big ‘difference’ between Manchester City and Chelsea is that Pep Guardiola’s side are more clinical, but warned that could all change by the time the Champions League final comes around.

Wenger, the former Arsenal manager, was impressed by the intensity and discipline of both English sides as they dismissed Paris Saint-Germain and Real Madrid in the semi-finals this week.

City thumped PSG 4-1 on aggregate, while Chelsea dismissed Real 3-1 – a scoreline that, ultimately, flattered the Spaniards – as they booked an all-English final in Istanbul.

Wenger, who guided Arsenal to the Champions League final in 2006, feels there is not much between the two teams but acknowledged Chelsea are more wasteful in front of goal.

‘Both are very good in transition and both teams can maintain a high level, a high rhythm for 90 minutes.

‘We could see that Real Madrid when they had to chase the game in the second half, they never found a way to be dangerous because the discipline of these English teams, the capacity to remain focused and the transition of pace to go quickly forwards was always a threat.

‘On that front they are quite level.

‘I find, the difference between the two teams is that conversion rate of chances created is, at the moment, much higher at City.

‘They need less chances to score goals than Chelsea. But that can change, the final is on the 29th. It’s 24 days – a lot can change in between.’

Ferdinand was 'embarrassed' after Messi humiliated Man United in 2011