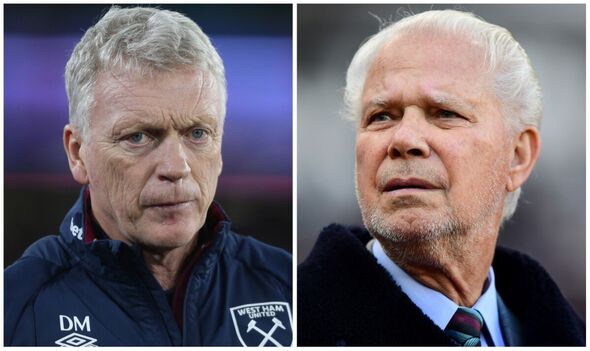 David Moyes has paid a touching tribute to West Ham co-owner David Gold after the club announced he had passed away on Wednesday at the age of 86. The Premier League club confirmed the British businessman “died peacefully” with his family by his side after it emerged he had been suffering from a short illness.

Gold, a former owner of Birmingham City, had been joint-chairman of West Ham for 13 years alongside business partner David Sullivan after the pair completed a takeoverof the club in 2010.

The pair are credited with saving the east London outfit from financial ruin after years of mismanagement from previous owners. Under Gold and Sullivan, the club were relegated and promoted back to the Premier League between 2011 and 2012.

And Moyes, in his second spell as manager after being hired in 2019, spoke in glowing terms about Gold’s presence at the club, hailing him as a “true supporter” and “source of encouragement” for his players.

“I am extremely sad to hear this news and, on behalf of all of the players and my staff at the training ground, I would like to extend our deepest sympathies to David Gold’s family at this very difficult time,” Moyes said in a club statement.

“Mr Gold was a regular visitor to Rush Green and always a source of great support and encouragement to myself and the players. It was clear that he had a genuine and sincere love for the club and was a true supporter at heart.

“He took a great interest in the people working behind-the-scenes and was always keen to help in any way he could. He will be greatly missed.”

Arsenal vs Brighton result: Player ratings as Freddie Ljungberg’s side fall to defeat