Gary Neville does not believe Arsenal can sustain the challenge to Man City and even Mikel Arteta conceded his squad is ‘very, very short’ after being dumped out Carabao Cup – so, what do Arsenal need to do in January to seriously fight for trophies?

As often is the case when the Carabao Cup rolls round, Premier League sides like to shuffle the pack.

Mikel Arteta did that for Wednesday’s visit from Brighton – and he learned pretty quickly how little depth Arsenal have to rely upon.

Ten changes were made from the start, with centre back William Saliba the only survivor from the weekend win over Chelsea.

Goalkeeper Karl Hein was in for his debut, Marquinhos and Reiss Nelson were in as wingers and Eddie Nketiah was leading the line in place of Gabriel Jesus. 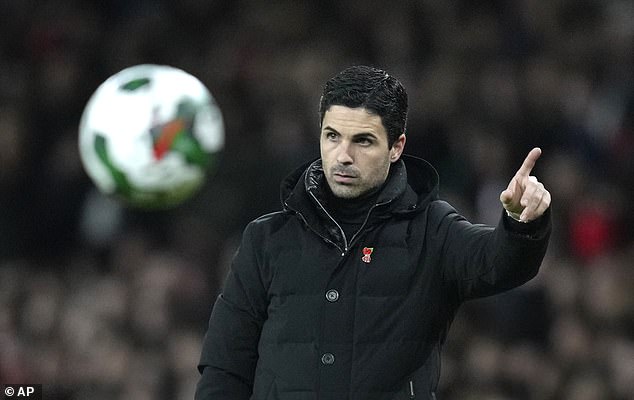 It didn’t work. Arsenal lost – convincingly. The 3-1 defeat has taken away another shot at silverware and has pushed Arteta into accepting that outside of his starting XI, which is top of the Premier League right now, a lack of depth is the cloud that hangs over their season.

‘That’s the squad that we have,’ he replied when asked if the result showed the need to spend in the transfer market.

‘We have to utilise in the best possible way and today we came short, especially because we didn’t do what we have to do in both boxes to win a football match. We paid that price.

‘It’s the same squad as when we win. I said from day one that we have a short squad because at the end we left some players. It’s what we have. 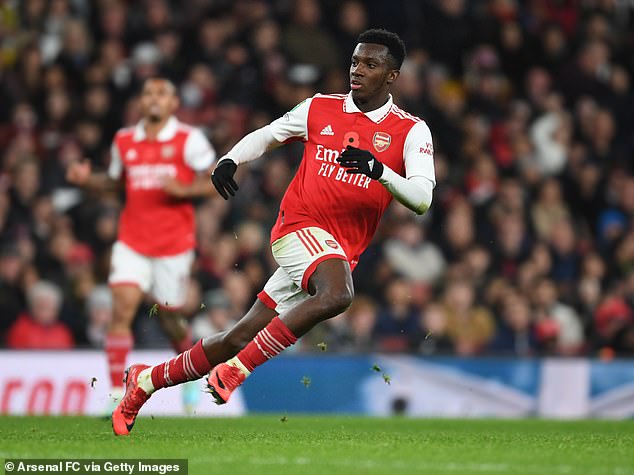 ‘We know as well that we have certain injuries, and the squad is very, very short. We have tried to manage that in the best possible situation.

‘It’s the same when we win a football match so no excuses.’

Arteta isn’t the only one with concerns, either.

Gary Neville is totally convinced that Arsenal are incapable of maintaining their early season form.

‘The only thing Arsenal have proven in the last few years is that they crumble at the end of the season, until I see that they don’t, I’ll still have that doubt. Why would I not?’ Neville insisted on the Overlap.

‘Manchester City will win the Premier League by 10-15 points this season. 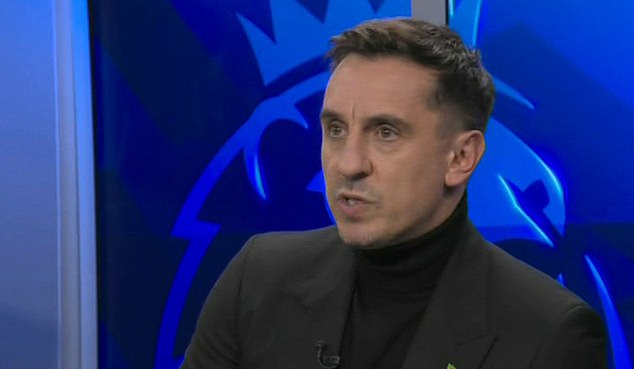 ‘I’ve seen It before when you’ve got a team that’s so exceptional, we had that a few times with Manchester United when I was playing, where you just know a team just hasn’t got it in them to go all the way to challenge the top team.’

For Arsenal it will, as things stand, come down to keeping their starters fit and investing in January if they remain in with a legitimate shot of dethroning Manchester City.

Defeat to Brighton was just the latest reminder of that the 10 players thrust into the side all missed their mark to impress.

With all that in mind, Sportsmail has broken the Gunners’ squad down and looks at the key areas they need to address if they are to sustain the challenge.

Not that there was much chance of Hein seriously staking a claim for the shirt but shipping three against Brighton was hardly ideal.

Ramsdale is pushing Jordan Pickford to eventually become England’s No 1 and so he is a real piece of quality for Arsenal to build a team with.

But back-up goalkeeper is always a tricky position to get top-tier cover for.

Any great goalkeeper is going to have options to be a No 1 somewhere and not since Sergio Romero was slumped on Manchester United’s bench has a No 2 had such a strong argument as a No 1.

Better quality cover for Ramsdale would be great but it’s far from the priority this season. 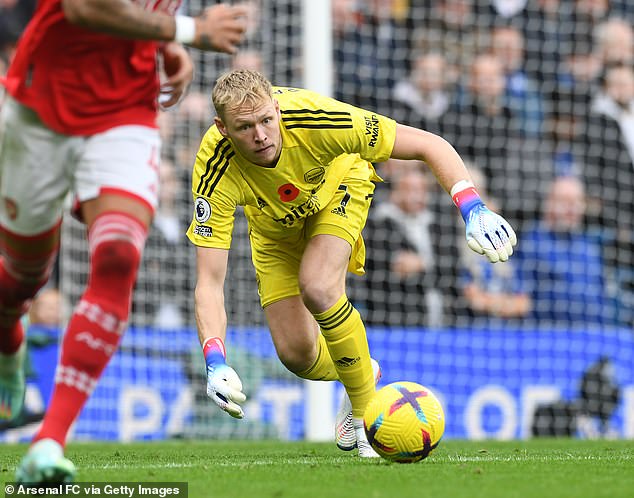 Tierney and Zinchenko battling it out at left back is the type of headache Arteta would love to have right throughout his team.

Both are starting caliber players and it means competition is always fierce down that side.

The worry is central defence and while Saliba played against Brighton, Rob Holding’s display will have done little to ease the nerves of Arteta should anything happen to Gabriel Magalhaes. 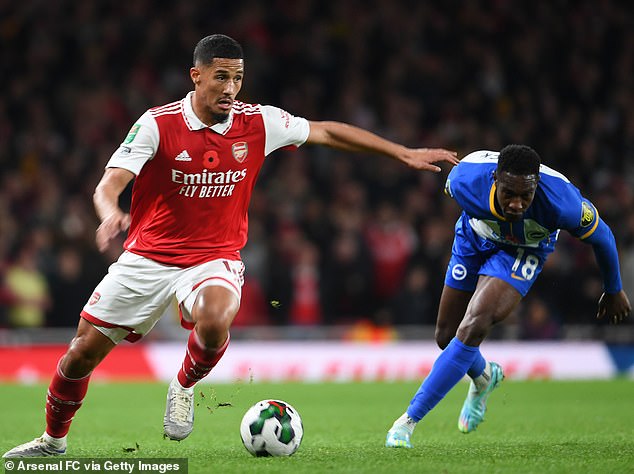 The versatility of Ben White means he could be moved inside – he’s played a chunk at right back – and Takehiro Tomiyasu can also do a job inside.

Given the board sanctioned £50million on White, it remains to be seen if they’d dip back in for another top-shelf centre back.

Cedric Soares at right back should also alarm. It’s the weakest area of their back-line. Well worth exploring a new full-back come January.

There are some bedrocks of the team in this department; a couple of Arteta non-negotiables.

There is no-one in the squad that can provide the kind of screen and defensive cover that Thomas Partey can to this side and while Mohamed Elneny is a fine rotation piece, having to use him in a title race would prove problematic.

Midfield’s issue is more so a lack of shield cover than creativity. 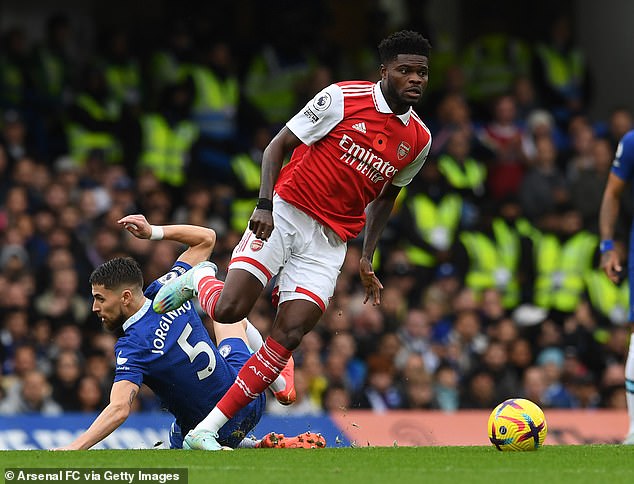 Arteta worked in the summer to spread around creation responsibility and the arrival of Fabio Vieira is a boost, should anything happen to Martin Odegaard.

Emile Smith Rowe has become something of a forgotten man this season having impressed in a number of big moments in 2021-22.

The fact that his level of quality remains in reserve is testament to what Arsenal are building.

Better uses of the money than another creative playmaker – but quality cover for Partey should be a priority.

Now we’re in a sticky spot.

Against Brighton neither Gabriel Martinelli or Gabriel Jesus played. And it showed.

Eddie Nketiah did score but as a front three it simply didn’t work and that is the biggest worry.

City look to have a diamond in Julian Alvarez, and he is playing second fiddle behind Erling Haaland right now. 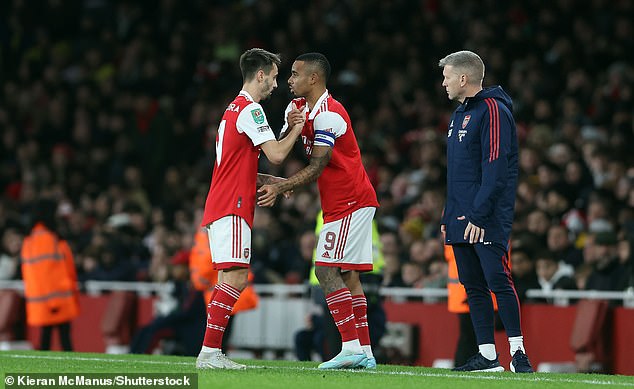 Others, like Jack Grealish, Riyad Mahrez, Phil Foden or Bernardo Silva, have had spells on the bench and they provide game-changing impacts for Man City.

Arsenal simply cannot look down their bench and find many game-changers – they aren’t there.

Jesus is playing well without adding the goals he needs, Martinelli has been electric but outside of that there are problems and attacking reinforcements should be front and centre of Arsenal’s January window.