There's been plenty said about the way Carl Robinson walked out on the Newcastle Jets – and plenty more about how he's worked the transfer market since joining the Western Sydney Wanderers, with a signing spree on the eve of the new season which left a sour taste in the mouths of three A-League clubs and a fair few neutral observers.

Ultimately, Robinson doesn't care. And nor will Wanderers fans, so long as he leads them back to the promised land. That journey finally begins on Wednesday night, with a historic showdown against their newest, nearest neighbours, Macarthur FC. 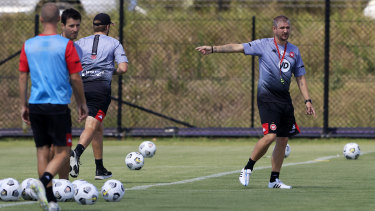 Carl Robinson, right, has worked wonders in the transfer market since joining the Wanderers – but rival clubs aren’t so enamoured with his work.Credit:Getty

"I enjoy doing what I do," said Robinson. "If people don't like it based upon me making decisions, that's part and parcel of it. But there's a reason behind everything I do."

Every good story needs a villain, and this season, it seems the Wanderers have been cast in that role.

It started with Robinson’s shock exit from the troubled Jets in mid-October, the full details behind which he hasn't – and still won't – reveal, because he's not the type to air his "dirty laundry" in public.

Suffice to say, since joining Western Sydney in those circumstances, he's no longer so warmly regarded in the Hunter as he once was. 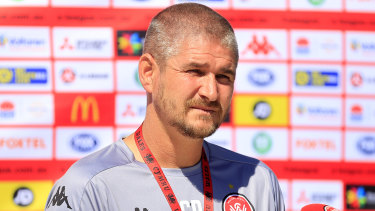 Carl Robinson only joined the Wanderers in October, but has already ruffled feathers throughout the league.Credit:Getty

"That's all I need to say, and if people want to have opinions, that's fine as well."

Robinson has been lapping up the richer resources and stronger pulling power of Western Sydney since leaving the Jets.

In the space of a week, he transformed what was a very threadbare squad with the signings of James Troisi, Ziggy Gordon and Bernie Ibini – three established and quality A-League campaigners who, according to their former clubs, were required players coaxed out of their contracts.

They didn't like it, but again, Robinson doesn't really care, even if his reputation as a ruthless talent poacher is now set as a result. Wanderers fans won't mind it either – it's an overdue return to the kind of big-club mentality that once set them apart from the rest. They're used to being disliked anyway.

"I can't control people's thoughts and minds," Robinson said. "I can control mine. I'm in a good place, a wonderful football club with great facilities. There's highly respected people [here] that have got a desire and a determination to be successful and win.

"Some people will like that, some won't. What I've got to do is piece it all together so we're successful in the short, medium and long-term. I'm here to build a project."

The Wanderers might only be eight years old but their fans have already seen their fair share of false dawns. Robinson is clearly aware, and says the only way they'll actually get their "swagger" back as a club is not by bringing in particular players but by winning consistently – although he insists his rebuild is a work in progress, and predicts his squad still won't be where he wants it to be in another six months from now.

But a victory in the A-League's latest derby would be a very good start. Robinson has been impressed with how Macarthur FC have built their inaugural roster, particularly at a time when it's never been harder to bring foreign talent to these shores.

"But we're a new team now as well, there's going to be a number of new faces, a different way of playing," Robinson said. "It doesn't happen overnight. One result isn't going to affect your whole season. You've got to think about the bigger picture and that's what I do.

"I can accept losing – I don't want to lose, I want to win every single game, unfortunately that's unlikely. But you can lose the right way by playing the right way and that's what I'm trying to instil here."