Barring a catastrophe, Western United will play finals in their debut season in the A-League – and depending on results, Mark Rudan's team could even finish as high as third.

United's 2-0 win over an out of sorts Perth Glory on Wednesday night ensured Western should finish at least as high as sixth and effectively eliminated Adelaide United, who would need Western to lose their last two games by a combined margin of 16 goals to see them qualify at Western's expense. 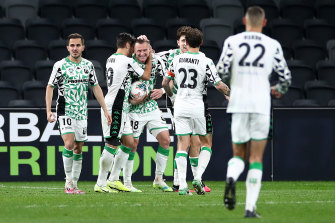 Western United celebrate with Besart Berisha after the striker opened the scoring.Credit:Getty Images

If Wellington Phoenix lose to Newcastle on Thursday and Western United win their last two games against Sydney and Melbourne City, the Victorians could snatch third spot.

It is unlikely, but not impossible. Not that Western will be bothered, given the confidence of this squad, who believe they can win the championship regardless of where they finish.

It was a cautious and cagey first half in which both sides put a premium on possession but were less effective when it came to fashioning real openings.

Western looked threatening when they broke at pace, playing some nice one-twos and passing movements, but all too rarely managed to create a shooting opportunity in the early exchanges.

Perth, who lost heavily to Melbourne Victory at the weekend, were even more culpable.

After that 4-0 shellacking it was understandable that Tony Popovic's side wanted to keep things tight but in this match that translated to lots of possession in their back half and midfield but little penetration in the forward third of the pitch.

Bruno Fornaroli had a chance early on but his shot was blocked, and then on 20 minutes he had an opportunistic effort when he tried a bicycle kick from Neil Kilkenny's free kick, but his effort sailed well wide.

United started to find some better movement midway through the first half, and took the lead shortly afterwards through veteran striker Besart Berisha.

Max Burgess picked up a short corner and flighted over a beautiful cross that the Glory defence could not clear before their goalkeeper Liam Reddy came to punch the ball away.

He connected, but unfortunately for him Berisha had followed in and Reddy's clearance cannoned off the Western striker and into the net, giving Berisha his 132nd A-League goal. 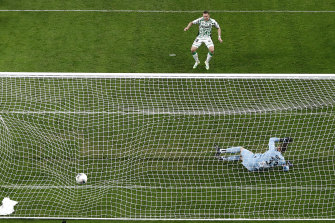 Berisha scores from the spot to seal the win.Credit:Getty Images

Given the lead they craved, Western shored things up at the back, letting Perth keep possession but marshalling the defence to stop them creating much of substance.

The game was effectively over five minutes into the second half when Western doubled the lead after some excellent lead-up work in which Alessandro Diamanti, Western's talisman, was heavily involved.

He linked with Connor Pain down the left and as the wing-back battled for the ball with Ivan Franjic he tumbled, the referee pointing to the spot.