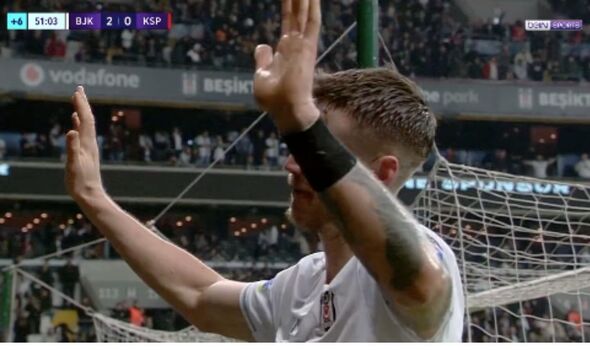 Wout Weghorst appeared to wave goodbye to Besiktas supporters after netting what proved to be the winner in their 2-1 Turkish Super Lig triumph over Kasimpasa on Saturday afternoon as links to Manchester United begin to intensify. The surprise development emerged amid reports that Old Trafford chiefs are in advanced talks to land the Holland international target man, who is currently on loan in Istanbul from Championship leaders Burnley.

Although the logistics of a potential transfer are not currently clear, it’s believed United are targeting a loan deal for Weghorst until the end of the season.

The 30-year-old frontman would bring a real physical presence to United’s frontline – something he displayed when netting twice for Holland in their World Cup quarter-final penalty-shootout defeat to Argentina in Qatar.

Ex-Wolfsburg striker Weghorst, who endured a rough six-month spell with Burnley in the Premier League this time last year, has found the net nine times in the Turkish top-flight for Besiktas this season since moving from Turf Moor last summer.

And it appears he could now be preparing to wave goodbye to the Super Eagles after he enjoyed an emotional moment with the home crowd on Saturday afternoon at Vodafone Park during the previous victory.

After finding the target deep into first-half stoppage time, Weghorst paused in front of the fanatical Bestikas supporters and appeared to wave goodbye after blowing them a kiss.

The unusual, emotional celebration would suggest that a transfer could be about to materialise in the near future amid reports a deal is advanced.

Express Sport has since been told by sources close to Weghorst that they won’t be commenting on their client’s future.