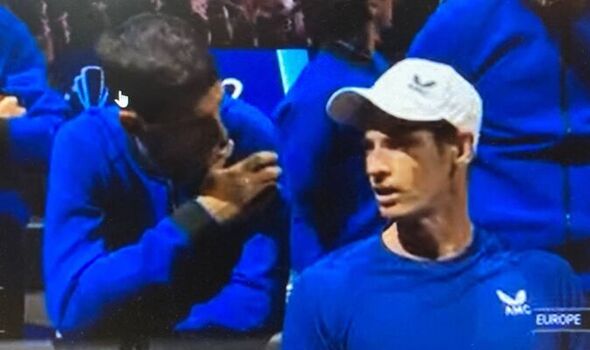 Novak Djokovic came to Andy Murray’s aid at a crucial point of the Brit’s Laver Cup clash with Alex de Minaur on Friday night. A unique element of the Laver Cup allows players and team captains to come over and offer the on-court players advice during the match.

Both Rafael Nadal and Roger Federer had earlier come over to give Murray some words of wisdom before the pair had to shoot off to prepare for their own doubles match later. That left Djokovic as the most senior member of Team Europe’s playing staff for Murray to draw some advice from.

The former British No 1 was in need of some assistance midway through the first set with De Minaur serving while leading 3-2. In the short break, Djokovic came to stand behind Murray and the two exchanged some words as the 21-time Grand Slam champion gave his thoughts.

Djokovic could be heard saying: “Great striking, great shots. Murray then asked: “Any changes to the backhand line? I need to put more on that ball, on the forehand. make him rush a bit?

Djokovic agreed, but also stated this his long-time rival needs to focus more on the quality of his shorts. He replied: “Yeah exactly, exactly he steps in. but I think the main focus should be the quality of your shots because you have the better quality shots rather than thinking what he’s going to do.

“His game, this is his game, he can’t change it much.”