Doha: Top seed Ashleigh Barty has defeated Garbine Muguruza in three sets to reach the semi-finals of the Qatar Open.

Barty beat Australian Open finalist Muguruza 6-1, 6-7 (7-4), 6-2 to set up a meeting with the Czech Republic's Petra Kvitova in the last four in Doha. 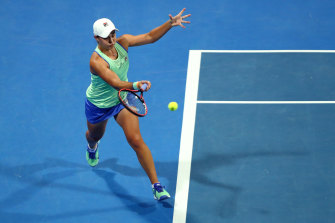 Ashleigh Barty is through to the semi-finals in Qatar after defeating Garbine Muguruza.Credit:Getty Images

Though the Australian had beaten the Spaniard twice before, it was a tight contest before the world No.1 broke away in the third set.

Barty, 23, claimed the first set in just 25 minutes, winning all 11 of her first serve points.

Muguruza broke in the second set to lead 4-2, before Barty broke back immediately to force a tie-breaker.

The Spaniard won the tie-breaker 7-4 to send the contest to a third set. 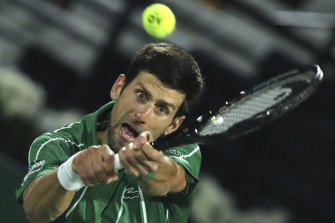 Novak Djokovic was too strong for Russian Karen Khachanov.Credit:AP

"Tough match for Karen, I think he can do much better than what he has done tonight, it wasn't his day."

Earlier in the day, Stefanos Tsitsipas said he would not let fatigue get in the way of his bid for a second consecutive final appearance in Dubai.

Tsitsipas, who successfully defended his Marseille title last Sunday, will be looking to extend his current winning streak to eight matches in a row when he takes on Evans for the first time.

"I did feel a bit tired when I started the match [against Struff]. Just couldn't put pressure on myself. That's a sign of fatigue. Besides that I still managed to find ways to fight," said the 21-year-old Tsitsipas.

"It wouldn't be an excuse even if I would lose, that I was tired. It's not an excuse. I should be in charge of that. It's my rehab that I got to take care of. I got to be ready for every single match."

Evans reached the first ATP 500-level semi-final of his career with a tough 6-2, 7-6 (11-9) success over sixth-seeded Andrey Rublev earlier.