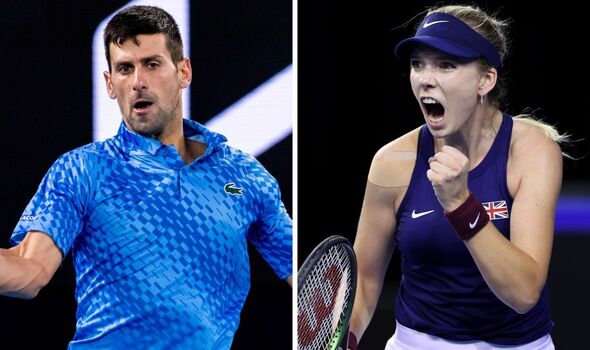 Katie Boulter’s boyfriend has a glamorous date with Novak Djokovic at the Australian Open on Monday. Alex De Minaur, the only home player left in the singles here, and the British No.3 have been a pair for two years. And the Leicester City fan, who won an ITF event in Canberra earlier this month before going out in qualifying here, has been adding her support in her Aussie’s player’s box during the tournament.

No.22 seed De Minaur said: “She’s amazing. I guess it’s the beauty of us being both in the same sport. We kind of understand each other. We know what to expect, how we can help each other in certain situations. Tennis is a very stressful lifestyle, as it is. It’s always great to have a partner that you can kind of count on, help you out here and there. It works both ways. I’m there to help her when she needs it. We kind of know what to say in certain situations because we’re in the same world, which is always good.”

The Aussie and Serb will play for the first time in the nine-time champion’s favourite night time slot in the Rod Laver Arena. (8am UK time).

Djokovic, who is nursing a left hamstring injury, said: “It’s a big challenge playing an Aussie guy here in front of his home crowd. I’m sure that the atmosphere will be electric, and he’s going to have a lot of support, and he’s going to be pumped to try to win the match.”

JUST IN: John McEnroe offers after solution after Nadal and Djokovic complaints

“But I’ve had experiences before. I played Lleyton Hewitt here. I played some big Aussie players, so I know how that feels. I know what to expect, so to say, in terms of atmosphere, the match itself.”

Djokovic has never met the 23-year-old on a match court but is well aware of his game style. “The fact that I never faced him is also challenging for both me and him,” he added.

“I think we don’t know much about each other’s games, but still we know each other pretty well because he’s been around for quite a few years. I’ve watched him play numerous times. I know how he plays. Yeah, let’s see what happens.”

Meanwhile, Boulter cracked a joke ahead of her boyfriend’s prime-time meeting with the nine-time champion. De Minaur posted to Instagram after learning his schedule for Monday’s match, writing: “Tomorrow 7pm RLA, it’s a date. See you there.”

And the British No.3 was straight in the comments, asking: “Who’s RLA and why they taking you on a date?”

When is Emma Raducanu’s next match? Briton takes on Maria Sakkari in US Open semi-finals