Australian Open favourite Novak Djokovic faces another disrupted tennis year, set to be banned from entering the United States until April at the earliest due to his unvaccinated status.

Having returned to Australia to pursue a 10th Australian Open title a year after he was deported, news emerged from the US overnight that the travel ban on unvaccinated foreigners had been extended until April 10. 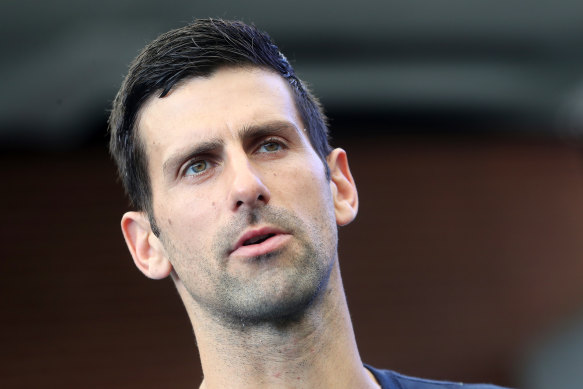 Novak Djokovic won’t be able to travel to the US until April at the earliest.Credit:Getty Images

An all-time great of men’s tennis, Djokovic missed last year’s Australian and US Opens due to his choice not to be vaccinated.

The United States Transport Security Administration department (TSA) extended the requirement for all overseas travellers to be fully vaccinated.

There are five ATP tournaments in the Unites States before April 10, including the prestigious Indian Wells and Miami events held in March. This year’s US Open major starts in New York in late August.

Wimbledon champion Djokovic began his Australian summer in South Australia, choosing to begin his 2023 season at the Adelaide International.

The nine-time Australian Open champion is due to play his next match there on Thursday.

Djokovic said his time in Australia had so far been positive. It’s largely been a low-key trip – in sharp contrast to the deportation drama 12 months ago.

“I can say it was different coming into Australia this year than any other year, certainly, because of the events 12 months ago, but at the same time, 12 months is quite a long time as well,” Djokovic told reporters on Tuesday.

“Already it’s behind me, I’ve moved on. I’m looking forward to coming because I always play very well and probably my best tennis throughout my career on Australian soil, so I came in early … I don’t actually recall when I came that early to Australia.

“I had plenty of time to adjust to the time zone, time difference, and just, I guess, adapt to whatever was waiting for me here. As I said from day one, people have been very kind and generous, with me and my team.”

From kick serve to slice backhand, the shots that make Ash Barty great