Adelaide: Novak Djokovic survived a surprise early scare and prolonged resistance from a determined Frenchman to reach the Adelaide International quarter-finals on Thursday.

The former world No.1 dropped his opening service game and fell 2-5 behind before bouncing back to defeat 64th-ranked Quentin Halys 7-6(7-3), 7-6(7-5) on his third match point in front of another pro-Djokovic crowd.

The Serbian contingent in The Drive stands seems to increase every time he plays, and they were again vocal in supporting their hero, who hailed Halys’ gutsy display. 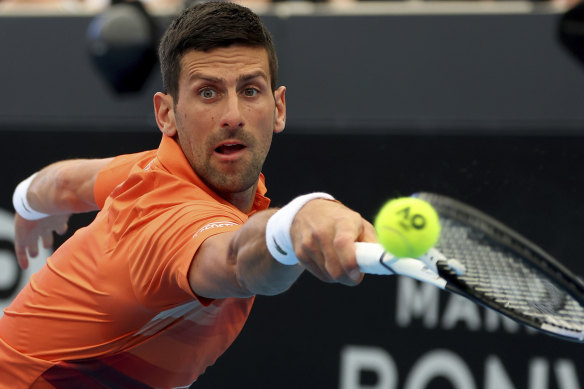 “It was a great performance from my opponent today. I want to congratulate him for great quality tennis and a great fight … he played like a top 10-player today, no doubt,” Djokovic said.

“As far as my game goes, I feel good on the court. I didn’t have such a great start. I lost my serve early, and he was serving really well – fast, big serves, hitting his spots in the box very well.

“It’s difficult to play on this kind of court that is really fast. It kind of favours the server. It’s tough to break the serve of a big server like him today, so two tiebreaks were probably the most realistic score of today’s match, and I’m just glad to overcome a tough challenge.”

Djokovic is just one win away from doing his bit to lock in a much-anticipated semi-final against Russian star Daniil Medvedev, in what would be a rematch of the 2021 Australian Open and US Open finals.

He will first have to get through Canadian Denis Shapovalov, who earned his shot at Djokovic with a 6-4, 6-3 defeat of Roman Safiullin earlier on Thursday.

Djokovic is unbeaten in seven career clashes with Shapovalov and conceded only two sets, but it should still be a step-up for the 21-time grand slam champion, who has been more solid than outstanding in Adelaide so far.

“Denis is one of the most complete players out there,” Djokovic said.

“He’s got a very dynamic style of tennis, a big serve, he comes to the net, he is comfortable playing from the back of the court, [he’s a] great athlete, moves fantastic.

“We haven’t played for a while, so I’m looking forward to that. Every match now gets tougher, and I’m going to be ready for that.”

Halys has never beaten even a top-30 opponent or gone beyond the second round at a grand slam, while earning $162 million less career prizemoney than Djokovic – but none of that mattered early.

Djokovic even appeared frustrated as Halys maintained his buffer for a period, particularly when he wriggled through a game where he staved off two break-back points.

But there always seemed an inevitable Djokovic fightback on the horizon. After some inspired tennis early, Halys went into his shell as he tried to serve for the first set.

Djokovic clearly sensed the Frenchman’s vulnerability and pounced from the first point of the game, eventually breaking back to love.

Halys did well to force a tiebreak but fell 0-5 behind and was soon a set down.

The 26-year-old hung in valiantly in the second set and saved consecutive match points on serve in the 10th game – prompting some fans to ready themselves for autographs – before reducing Djokovic to 0-30 in the next game.

Another tiebreak followed, with Djokovic finally breaking the deadlock at five-all and sealing victory.