Paul McNamee says it’s disappointing that Nick Kyrgios has a disdain for clay because “he can play on anything, that guy” and spending time on the surface would help the Australian with results across the sport.

The 26-year-old Canberran hasn’t played since the Australian Open in February and hasn’t featured abroad on a tennis court since playing an event in Mexico 15 months ago – just before the COVID-19 pandemic struck. 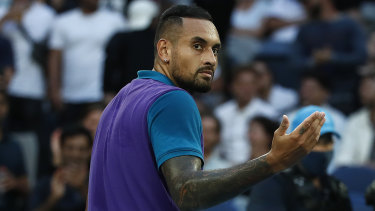 Nick Kyrgios is open about his feelings for the clay court surface.Credit:Getty Images

Ranked 56 in the world, Kyrgios is expected to return to the ATP Tour when the grasscourt season swings into action in Europe next month.

ATP and WTA players are in the middle of the claycourt swing ahead of the French Open, starting on 30 May. Kyrgios has more than once expressed his disdain for the red dirt, and two years ago pulled out of the claycourt major after training on grass in London and declaring “the French Open just sucks compared to this place”.

Kyrgios hasn’t played the French Open since 2017 and it was on the Rome red dirt at the 2019 Italian Open where the Australian copped significant fines for an on-court tantrum which included hurling a chair across the court.

Former Australian Open tournament director and doubles champion McNamee said it was a shame Kyrgios “doesn’t see the joy” of playing on clay. McNamee is also adamant that the red dirt is the best surface for developing players.

“I just see that as a shame that he’ll never feel that joy that I felt on it … the nuances [and] the unlimited options it gives you as a player,” McNamee said.

“It’s like playing chess, right. Nick has the ability to do that. He likes commanding the court, so that’s just disappointing and I think it hurts him now not playing as much on clay as he used to.

“He has expressed, very directly, his dislike for it. And unfortunately some disrespect for clay-court players.”

McNamee pointed out that the majority of men’s players in the top 100 come from Europe, where clay has a higher status compared to hardcourts.

“Where I disagree with him is that he thinks that the aristocracy, you know, of the sport is on the faster surfaces where in fact – as the Europeans know – the aristocracy is on clay,” McNamee said.

“You haven’t been accepted as a top player until you conquer clay. It goes against the grain with the history of tennis, but that’s his prerogative and he’s entitled to his opinion.

“He’s absolutely entitled to it. I just have a different view.”

McNamee, who himself wasn’t exposed to clay until he was 18 and in Europe, believes it’s vital for players to persist with the surface.

“It’s understanding all the nuances of the sport. If you don’t conquer that – it’s like an American golfer who never gets to understand links golf. The great Americans go there and conquer it. Because it’s a different form of the game, and it tests all manner of skills, that are not tested on a hardcourt.

“It will only be to your benefit.

“You may not win Roland Garros, but you understand the game better and you’ll be more respected in Europe.”