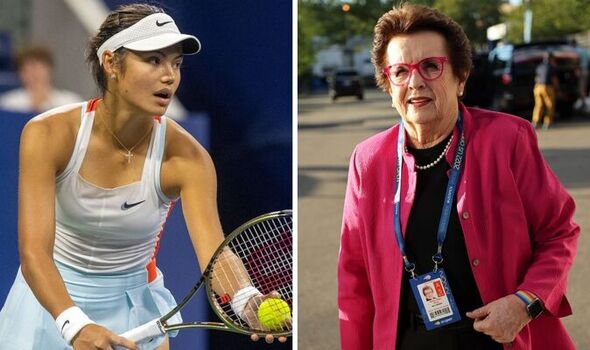 Billie Jean King has offered Emma Raducanu some advice as she weighed in on the scrutiny the teenager found herself under since winning the 2021 US Open. The tennis legend said the British No 1 needed to do some soul-searching but staunchly defended her, calling on critics to back off and let her breathe.

Raducanu made tennis history when she became the first qualifier to win a Grand Slam title at the US Open 14 months ago but has since seen mixed results in her first full season on the tennis tour and gone through several coaches as she began to navigate life as a top player.

The 19-year-old hit a career high of world No 10 this year but now sits at No 75 after losing in the first round of the US Open on her return as the defending champion, and she has received some advice from one of the game’s biggest icons. “First of all, you can’t pay attention to what anyone says about you. And don’t take anything personally,” King said after arriving at her namesake tournament – the Billie Jean King Cup – in Glasgow.

“But then you’ve got to find the right person to talk to. And that’s the hard part because everyone has an opinion. It’s important for her to find out what she wants in life. She needs to search her own soul.”

JUST IN: Djokovic’s wife speaks out on Paris Masters antics that irked fans

The world No 75 has struggled to find a mentor who suits her after going through four coaches in the space of 14 months. It’s another decision Raducanu has been scrutinised for as she axed Nigel Sears after her 2021 Wimbledon run where she made her Grand Slam debut as a wildcard ranked at world No 338 and made the second week.

She then got rid of Andrew Richardson just two weeks after winning the US Open and enlisted Torben Beltz in search of an established WTA Tour coach, firing him after five months together. And Dmitry Tursunov recently chose to walk away from the Brit after a couple of months together, but King has defended the Bromley local and said she should make her own decisions.

The 12-time singles Grand Slam winner explained: “Our job is to give her time and space. Let Emma decide what is best for her, not have everyone else deciding for her. Glean the information that pertains to her.

“I hope everybody just backs up. It’s like she has no breathing room. Give her some time to breathe, some space. She’s really young. Give her time.”

Maria Sharapova withdraws from the Miami Open after shoulder surgery

Kyrgios could skip all tennis in 2020