Stefanos Tsitsipas and Alexander Zverev are set to meet each other for the eighth time in their careers, after progressing through to the semi-finals of the French Open.

Zverev was the first to secure a place in the last four of the clay-court Grand Slam, as a result of his 6-4 6-1 6-1 victory over Alejandro Davidovich Fokina.

Tsitsipas’ contest with Daniil Medvedev headlined the night session on Court Philippe-Chatrier and the Greek overcame the second seed 6-3 7-6 (7-3) 7-5.

The second set of quarter-finals will take place on Wednesday, when Rafael Nadal meets Diego Schwartzman and Novak Djokovic takes on Matteo Berrettini during a night session that will see fans return to the stadium.

Tsitsipas settled quickly inside the empty arena in Paris, with spectators still not able to attend the late match due to the COVID-19 curfew and he took the opening set in just 31 minutes.

The Greek continued his momentum early in the second set. He enjoyed a 3-1 lead before Medvedev recovered his composure and levelled proceedings at 3-3. However, the Russian then failed to take set-point chances in the 10th game.

After that it went to a tie-break and Tsitsipas took control. He claimed a mini-break on the first point, before a double hold moved him 3-0 ahead and from there he charged over the line.

Having lost the tie-break, Medvedev left court for a change of clothes and his new attire appeared to reinvigorate him. The second seed’s fresh energy enabled him to break Tsitsipas in the fifth game – only for the world No 5 to break back and lead 5-4.

The Russian then had a heated exchange with the chair umpire before holding at 5-5.

Tsitsipas was able to calmly push the aggravation at the other end of the court to one side. He remained supremely focused, battling back from from 40-0 down, and then swatting away an underarm serve from Medvedev, to take the contest on his first match point.

“I was playing against one of the best guys on the tour, so I had to keep the intensity up and elevate my game during the entire match,” Tsitsipas said.

“I felt that I was playing really well and not giving him a lot of space. I think that my performance was close to being one of my best this week, I would say. I’m really happy with that.

“Being here on clay in Paris brings back good memories, I’m happy to keep on repeating that and trying to go further day by day.” 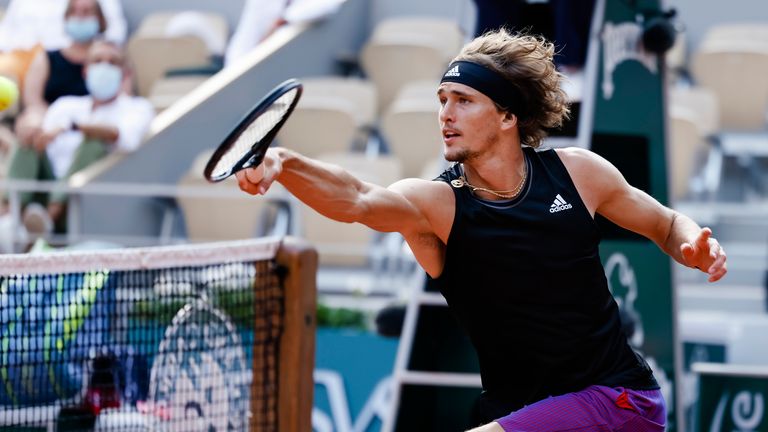 Meanwhile, Zverev cruised into the semi-finals with a 6-4 6-1 6-1 triumph over Davidovich Fokina.

After a tense opening set, in which both players struggled to hold serve, the world No 6 stepped up a gear and didn’t look back.

In total, Zverev spent just 96 minutes on court and although he’s pleased about reaching his third Grand Slam semi-final, and his first at Roland Garros, he wants more.

“It’s very nice being in the semi-final, but just being here doesn’t satisfy me,” Zverev said on court.

“I know I’m playing pretty okay, and I hope I can continue playing the same way, maybe even better in the semi-finals and then we’ll see in two days’ time what it holds for me.

“Obviously, the Grand Slams are the tournaments that we want to win the most. Before, maybe in the last few years, I was putting too much pressure on myself,” he admitted.

“I was not very patient with myself, which I feel like now, maybe, I have learnt how to deal with the situation a little bit better. I’m a little bit calmer at the tournaments, but the end goal hasn’t changed.”