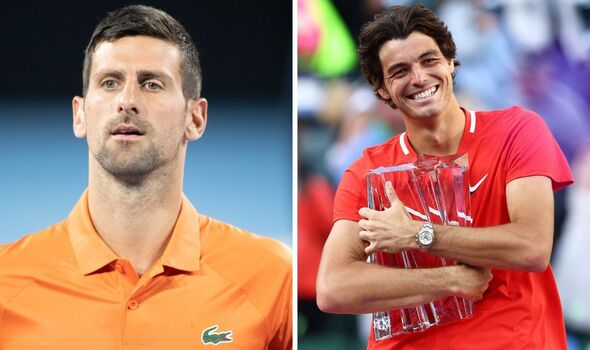 Reigning Indian Wells champion Taylor Fritz has spoken out following news that Novak Djokovic will be stopped from playing the first two Masters 1000s of the year after America extended their vaccine requirements to enter the country. The world No 5 was prevented from playing the ‘sunshine double’ of Indian Wells and Miami last year, and will be forced to sit out the two prestigious events for a second year running.

After an unprecedented season that saw Djokovic unable to play two Grand Slams and four Masters because of his unvaccinated status, the 35-year-old is currently in Australia 12 months after he was deported and banned from the country when he arrived unvaccinated last year. With the country’s entry requirements changing, the 35-year-old’s ban was lifted and he will be able to fight for a record 10th Australian Open crown.

But the world No 5 will then return to finding himself banned from top tournaments, as he will be forced to miss the first two Masters events of the year in Indian Wells and Miami after the American government extended their requirement for all foreign nationals entering the country to be vaccinated. Following the news, one of the defending champions has now shared his support for Djokovic and detailed why he believes the Serb should be allowed to compete.

“Obviously, from the point of view as a player with the goal of defending my title, it makes the draw easier if Novak is not there, but I don’t know,” Fritz said on Saturday. “I feel like we’re at a certain point where they should probably let him into the country, but I don’t make the rules.”

The world No 9 spoke after he and his American United Cup teammates finished their semi-final tie against Poland with a perfect 5-0 record. While Fritz didn’t entirely agree with his country’s rules extending, compatriot Frances Tiafoe admitted that it would be better to have the top players competing at the best events.

The world No 19 added “In the end you want the best players in the world playing the most important tournaments. It is what it is. The rules are what they are.” And thinking about his own chances during the sunshine double, Tiafoe joked: “I will really miss him in Indian Wells. Not really.”

Djokovic himself has already responded to the idea that he could be banned from competing again and remained matter-of-fact about the issue. “Look, if it is official, then it is,” the 21-time Grand Slam champion said.

“I mean, what can I do? Nothing. That’s it. You know my position. It is what it is.” For now, Djokovic’s attention will be on the Adelaide International where he faces Daniil Medvedev for a spot in the final, World No 33 Sebastian Korda advanced to the championship match earlier on Saturday after Yoshihito Nishioka retired during their semi-final with the American leading 7-6(5) 1-0.