It is the side of professional tennis that we rarely get to see.

Melbourne’s Marc Polmans went from a career-best moment to two of his toughest within mere months barely a year ago. 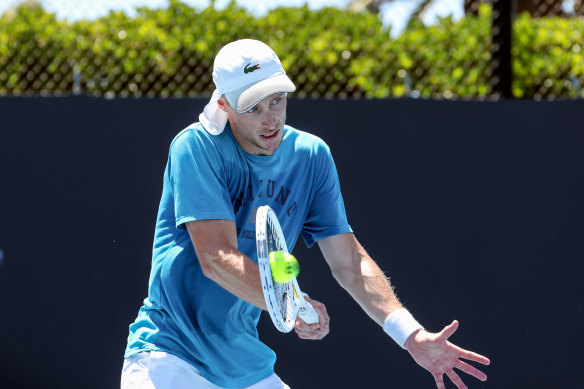 Marc Polmans works out on Sunday ahead of this month’s Australian Open.Credit:George Sal/Tennis Australia

After linking up with Spanish coach Jorge Garcia, Polmans went within one win of qualifying for the 2021 French Open before not only qualifying at Wimbledon weeks later, but also making it through to the second round.

It was the 25-year-old’s third match victory on the sport’s grand slam stage – and he felt ready to take off, having already been ranked as high as 116 in the world.

But Garcia was a wanted man. Spanish star Paula Badosa, then ranked inside the top 30 on the women’s tour and who has since reached No.2, used to work with him as a junior and was keen to rekindle the partnership.

Garcia parted ways with Polmans after that year’s US Open and still coaches Badosa.

“That was something I’d never really dealt with,” Polmans told The Age and The Sydney Morning Herald.

“She was in the top 20 or 30 at the time and could definitely afford to pay him double, or whatever it was, that I was paying him, so it was unlucky, but it can happen in tennis.”

Polmans finished the season without a coach and during that time he began suffering pain in his left ankle, most notably when he served.

He took all of December off to see if that would solve the problem, and it worked initially before the pain returned during the Australian tennis summer. 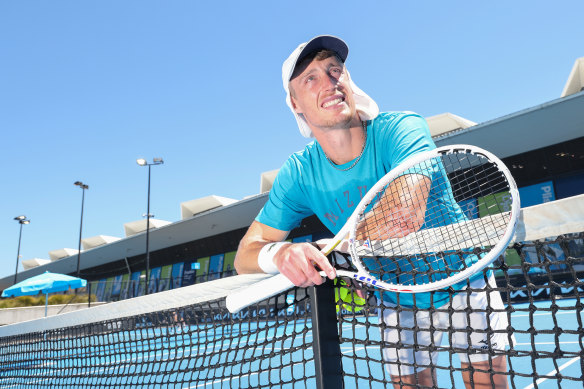 Marc Polmans is keen to make up for lost time after an ankle issue.Credit:George Sal/Tennis Australia

In the meantime, a new coaching union started. Polmans turned to his brother Greg, once a promising junior himself whose professional dreams ended due to a series of injuries, including a back stress fracture and shoulder issues.

The benefits were numerous: Greg had completed a coaching course, he knew his sibling’s game inside out, and could double as a hitting partner and help ease the loneliness on tour that Australian tennis stars feel as much as anyone.

“I know I can fully trust him, and that he’s not going to leave me for another player, so that’s a positive,” Polmans said with a laugh.

“A lot of Aussies struggle a bit when they’re overseas for months on end, so to have someone really close to me to share the grind with definitely helps and keeps me in a happy mood on court.

“The Aussie boys will all say how travel is the biggest challenge. We all enjoy playing tournaments and matches, but the travel is brutal because we can’t come home on a five-hour flight – it’s more like 15 or 16 hours, so it forces us to stay overseas for months.” 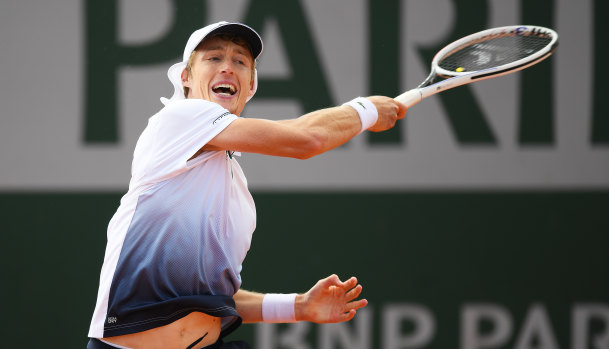 Polmans pointed to fellow Australians Jason Kubler, James Duckworth and Max Purcell – who partnered Matt Ebden to last year’s Wimbledon doubles title – as others who bring friends or loved ones on tour with them, sometimes at the expense of a coach, to remedy the blues on the road.

But back to the ankle. He began consulting surgeons last January and kept playing for another month, but the message was resounding: the problem was not going away without surgery.

In layman’s terms, a bone in Polmans’ left ankle had grown too fast and was rubbing against another every time he landed after a serve. It is called an ankle impingement.

He went under the knife and spent a month afterwards on crutches, with an initial goal to be ready to play again at last year’s French Open. But he wasn’t ready.

Almost four months passed by the time Polmans decided to extend his rehabilitation to six, to be eligible for a protected ranking of 208. It is a temporary mechanism that helps players more easily transition back to the tour post-injury.

He is using the protected ranking to enter Australian Open qualifying this week and can do so again at the French Open, but after that, he is on his own.

Polmans’ actual ranking ballooned to almost 800 while he was sidelined, but he will already be close to the top 300 again by Monday after a strong return at the secondary Challenger level.

The man known for his Legionnaires hat will be one of 29 Australians attempting to win three qualifying matches to reach the main draw at Melbourne Park as he chases his top-100 goal.

It would be his fourth appearance if he is successful, after scoring a wildcard entry from 2019-21.

“It’s mentally a big challenge to step up and get through three rounds of qualifying,” Polmans said.

“Last year [at the Australian Open], I didn’t have any proper pre-season because I was dealing with my ankle issue, but this year I’m fitter and ready to back up matches, one at a time.”

World No. 1 Ash Barty will not defend French Open title

Maverick charmer Medvedev could become the best player in the world