Can Emma Raducanu really go all the way at the US Open? British teen sensation is yet to drop a set, has no home pressure on her shoulders (unlike Wimbledon!) and has avoided world No 1 Ash Barty in round four

Emma Raducanu’s fairytale in New York shows no sign of ending as another dominant performance saw the British rising star through to the second week of the US Open.

The 18-year-old, from Bromley in Kent, thrashed Spanish world No 41 Sara Sorribes Tormo on Saturday night to set up a last-16 meeting with American Shelby Rogers on Monday.

It followed similarly impressive wins over Swiss Stefanie Vogele and Zhang Shuai in the earlier rounds. 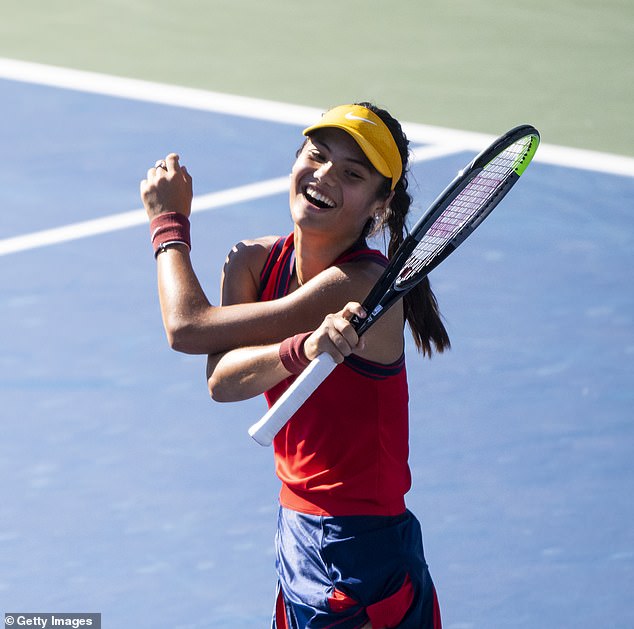 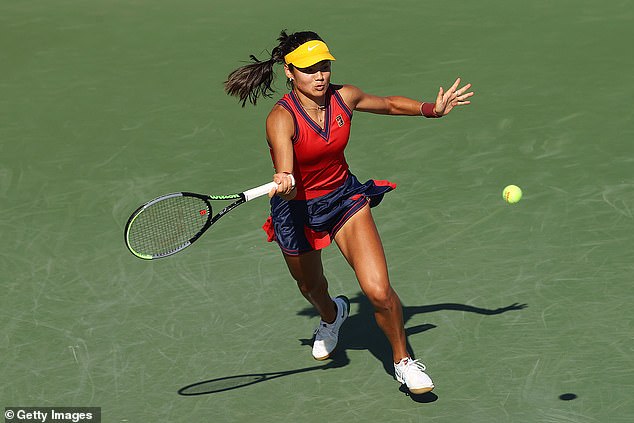 Even including the three qualifiers she won to make her second Grand Slam tournament, Raducanu has yet to drop a single set at Flushing Meadows.

In reaching round four, Raducanu has already assured herself at least £190,000 in prize money to add to the £181,000 she collected by reaching the same stage of Wimbledon in the summer.

It’s increasingly obvious that Raducanu’s career potential is limitless but how far can she progress in this US Open? Here are the factors in her favour.

Unlike her debut Slam at Wimbledon earlier this year, Raducanu won’t have to shoulder the burden of home expectation in her last-16 match.

Quite the opposite given that American opponent Rogers, ranked No 43 in the world, will have to contend with the pressure of a home crowd.

Their support could well prove a boost but Raducanu has the advantage of having absolutely nothing to lose when they meet on Monday.

She wasn’t expected to progress this far, despite the amazing promise shown at SW19 back in July, and so can enjoy the experience win or lose. 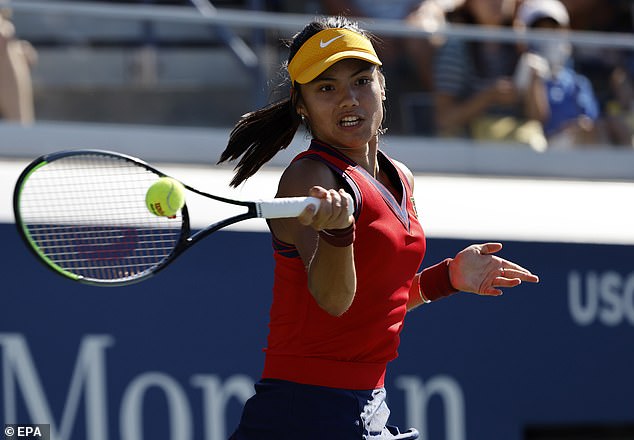 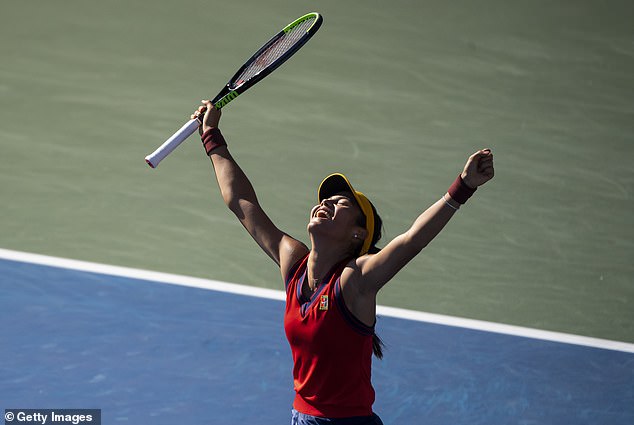 Raducanu’s emergence into the wider public consciousness at Wimbledon created a real buzz as everyone scrambled to learn more about this prodigiously talented teenager.

She was the story of the Championships after beating two top-50 opponents in Marketa Vondrousova and Sorana Cirstea – becoming the youngest British woman to reach the last-16 in the Open era.

Suddenly, she was receiving tweets of encouragement from the Duke and Duchess of Cambridge and Prime Minister Boris Johnson, and topping new bulletins after her wins.

It all proved a bit too much in her fourth round match against Ajla Tomljanovic with Raducanu forced to retire in the second set after suffering breathing difficulties.

While interest in Raducanu on the other side of the Pond is growing with every victory – fans asked for selfies and autographs on court 17 after her latest win – it isn’t anywhere near the feverish levels of Wimbledon and should play into her favour. 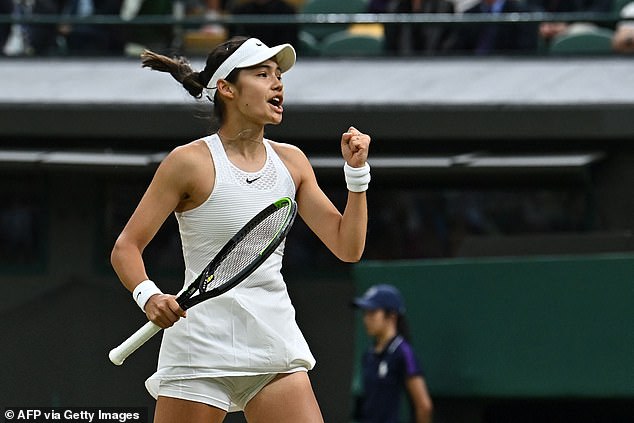 Raducanu, who hails from Kent, made a major breakthrough at Wimbledon in the summer 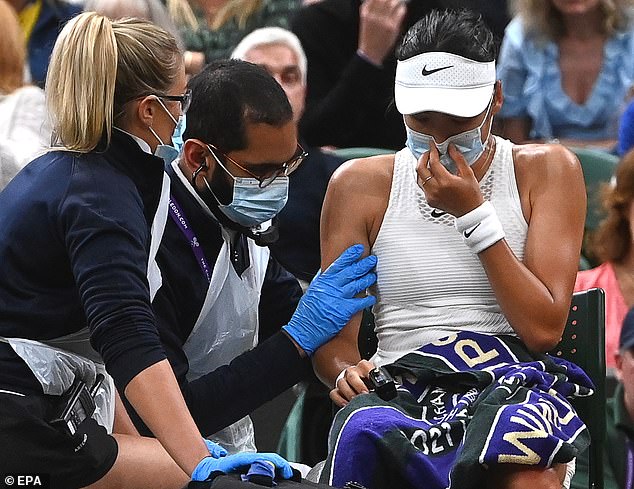 WORLD NO 1 BARTY IS OUT

Everyone expected Raducanu’s fourth round opponent to be the world No 1 Ashleigh Barty but the Wimbledon champion was stunned by Rogers on Saturday night.

Barty definitely would have provided a tougher examination of Raducanu’s credentials and while the Briton won’t look beyond Rogers, the draw has certainly opened up with her elimination.

Elsewhere in the top half of the draw alongside Raducanu vs Rogers, we have a meeting of the seventh seed Iga Swiatek and eleventh seed Belinda Bencic, while Karolina Pliskova meets Anastasia Pavlyuchenkova and Bianca Andreescu plays Maria Sakkari. 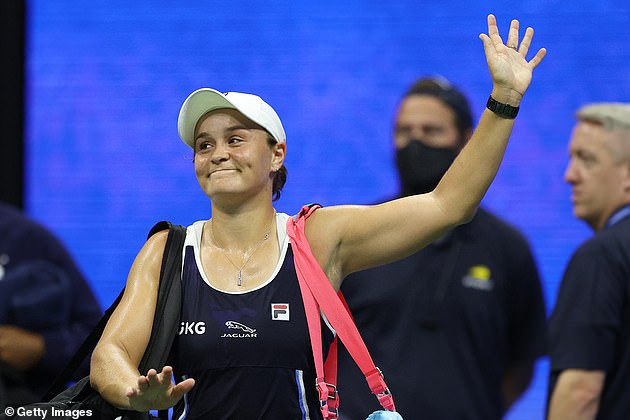 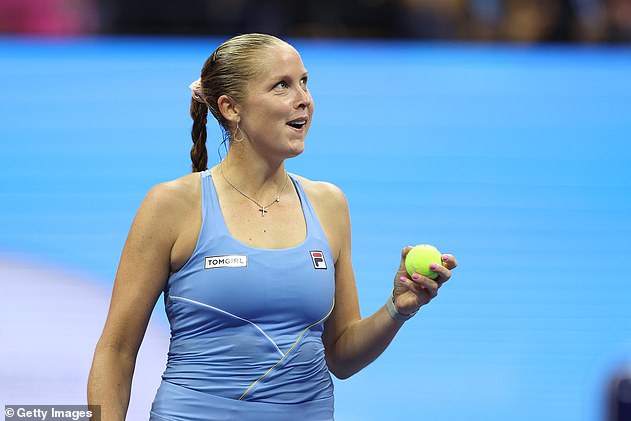 The likes of Aryna Sabalenka, Garbine Muguruza, Angelique Kerber, Simona Halep and Elina Svitolina are all in the bottom half of the draw and so will be away from Raducanu until the final.

Rogers, 28, who has never got past the quarter-finals in a Slam, is currently ranked two places below Sorribes Tormo, the opponent Raducanu just blitzed, so there’s every chance she could progress further in the kinder side of the draw.

CONFIDENCE GROWING WITH EVERY SCALP

Raducanu always seems to play tennis with a beaming smile on her face and that clear enthusiasm for the game certainly hasn’t diminished on the biggest of stages.

Her confidence is soaring with every hurdle negotiated at the US Open and that was evident in her 6-0, 6-1 demolition of a despairing Sorribes Tormo in just one hour and nine minutes.

The scoreline accurately reflected a thorough dismantling of the Spaniard’s game through aggressive and relentless hitting both when serving and on the forehand.

Far from feeling her way into the contest, Raducanu stamped her authority from the first game and won 29 of the 42 points played in the first set. 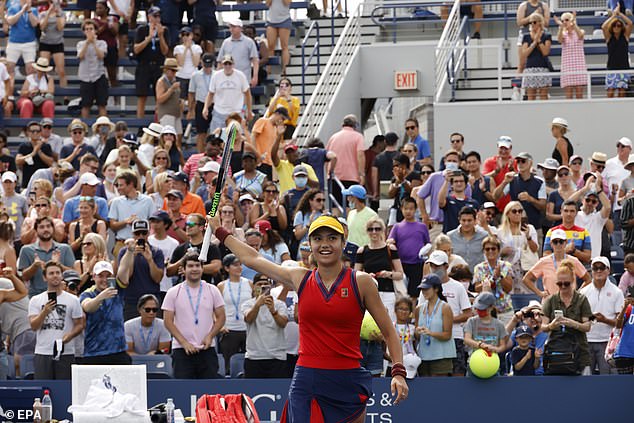 It was a sign of Raducanu’s ruthlessness that she looked disappointed not to win the match without dropping a game but she soon closed out the match to claim the highest-ranked scalp of her career.

The win is almost certain to lift Raducanu into the world’s top 100, meaning we’ll be seeing plenty more of her at the leading tournaments in the months ahead.

And she really couldn’t have put it better afterwards: ‘My game is just getting better with each match.’ Rogers beware. 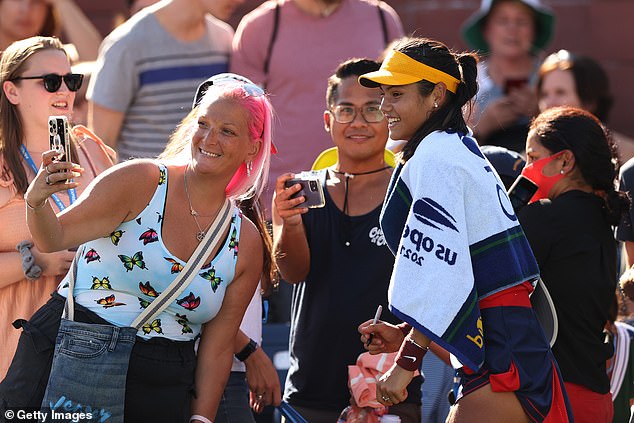 Raducanu has just earned an A-star in Maths and an A in economics in her A-Levels and her tennis ‘homework’ is pretty strong too.

With coach Andrew Richardson, she spent plenty of time studying the game of Sorribes Tormo to identify weaknesses that could be exploited.

One area was hitting the ball on the rise and driving the ball wide to her opponent’s backhand and it worked a treat.

After her second round win, Raducanu said: ‘My preparation is key in my game and one of my biggest weapons. It’s definitely helped me in my game.

‘At this level, no-one really has a weakness. You can’t go for one side expecting a mistake.

‘But there’s always some loopholes you can find and some discomforts, so that is something I try to expose. That’s what the homework hopefully highlights.’

Rest assured that Raducanu won’t be spending her Sunday in New York sight-seeing. There will be video clips of Rogers’ game to scrutinise and game plans to formulate.

The fact Raducanu was so recently in school means her thirst for learning remains sharp and applying that to tennis is a major factor in her success. 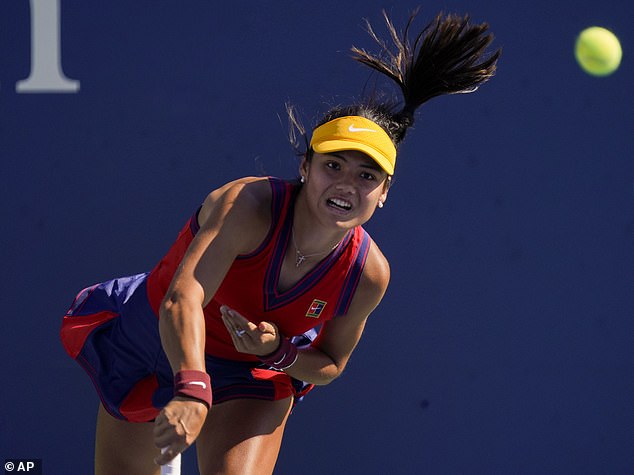 WIMBLEDON RETIREMENT WILL MAKE HER STRONGER

Former pro turned pundit Annabel Croft believes Raducanu is ‘the most exciting British prospect since Andy Murray’. No pressure there, then.

That resemblance comes from her competitive streak and mental toughness on court and the later aspect will certainly be helped by what happened at Wimbledon.

Raducanu has put that firmly behind her to produce her best form at the US Open, showing no signs of being scarred by the experience.

When she is required to dig deep again, her mental resilience will undoubtedly be stronger and, whatever happens on Monday, a sense of perspective should be maintained.

Raducanu is only 18 and will grace many more Slams in the years ahead. Her present success is exciting enough but it’s only the beginning of the journey.