One week after declining to reveal his COVID-19 vaccination status, the Greek star was asked about the looming vaccine mandate for athletes heading Down Under. 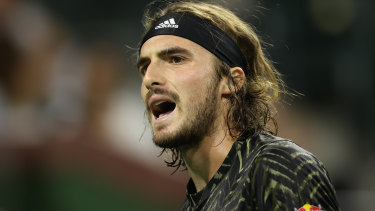 While the Victorian government’s sweeping vaccine requirement for authorised workers will not affect international cricket and tennis players, The Age this month confirmed it is probable a separate vaccine mandate will be required for tennis stars.

When quizzed about the expected strong stance from Australian officialdom, and its impact on any vaccine-hesitant players, Tsitsipas said: “I will play under the conditions that have been set now. I think it’s fair.”

The move from Australia’s policy-makers came after Tennis Australia boss Craig Tiley spent months raising concerns about a mandate because of its potential to turn away a group of top players.

The Australian Open chief has since become resigned to it and is cooperating with the government, according to four government and sports sources speaking anonymously to detail confidential negotiations.

Ahead of the current the Indian Wells tournament in California, 23-year-old Tsitsipas was asked whether he’d received a vaccine for COVID-19 – and the reasons why or why not.

But, at Indian Wells on Wednesday (Thursday AEDT), after a hard-fought three-set elimination of Australian Alex de Minaur ahead of the quarter-finals, Tsitsipas briefly elaborated on his situation.

Said a reporter: “The local government in Australia has suggested [to] players to get vaccinated.

“There is a possibility that players who are not vaccinated could face more restrictions in terms of quarantine and movement during the grand slam. So, will you play under such conditions in Australia?”

After a pause, Tsitsipas described the requirements as “fair”.

Meanwhile, de Minaur is determined to put in a strong showing for Australia at the Davis Cup finals in late November after he cruelly missed the Tokyo Olympics after contracting COVID-19.

“Davis Cup is always up there as my highest priority. It’s probably one of my favourite weeks of the year – 100 per cent – coming together as a team,” said de Minaur.

“If I didn’t enjoy it and love it as much as I do, it probably doesn’t make sense [to still commit to it] in a year like this one.

“It doesn’t matter how tired I can be from playing matches, I can tell you right now I’ll be ready for DC (Davis Cup).” 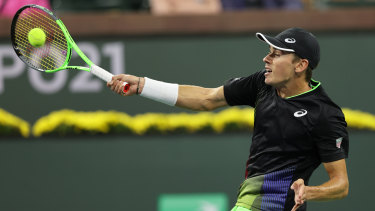 The 22-year-old is planning a busy schedule to close out 2021, culminating with the Davis Cup, after an up-and-down year including his positive COVID-19 diagnosis.

Ranked 15th at the end of June, de Minaur lost in the first round at both Wimbledon and the US Open, either side of the Olympics.

But de Minaur’s improved form was on display in an ultimately frustrating loss to French Open finalist Tsitsipas, the Australian claiming the first set before going down 6-7 (3-7), 7-6 (7-3), 6-2.

“It’s a step forward. I was probably a couple of points away to get [winning] that match,” said de Minaur.

“I’m just disappointed my body wasn’t good to me today. There’s not much you can do. It’s the first time I’ve played a couple of matches in a row for a while. You can’t replicate match intensity, especially against these top guys.”

Two of de Minaur’s five career titles have come in 2021 – at Antalya in Turkey in January and at Eastbourne just before Wimbledon.

“[There are] lots of positives this week – we keep moving on,” he said.

“Hopefully this sets up a strong finish to the year.“

De Minaur is planning to play events in Antwerp, Vienna, Paris and Stockholm before the Davis Cup finals.

“But then again I can look at it in the sense that even in a year where I haven’t played probably my best tennis I’ve had to deal with a couple of things here and there – COVID [and] not good form – I’ve managed to win two titles and the year isn’t done yet.

“Hopefully I can turn the narrative and finish the year strong.”

“Now it’s all about building – building on this performance and hopefully week in week out I can play two [or] matches every week and my body can get back used to the grind.”