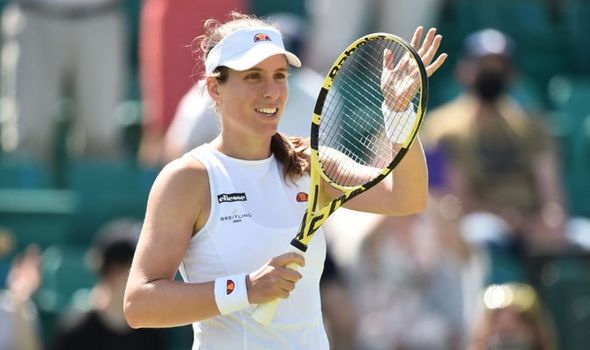 Jo Konta became the first British woman to win a home title for 40 years when she claimed the Viking Open Nottingham today. The British No 1 raced to victory over world No 46 Zhang Shuai 6-2 6-1.

The former Wimbledon semi-finalist had never won a grass-court title before – and had lost four finals since winning her last title in Miami in 2017, including two in Nottingham.

And the last Brit to win at home was Sue Barker in Brighton in 1981.

Konta had only three victories in six events this season and had not won back-to-back matches.

The former world No 4 sacked her coach Dimitri Zavialoff after her first round defeat at the French Open but has now started her Wimbledon build-up with five wins on grass.

After lifting the Elena Baltacha Trophy, she said: “I haven’t done a winner’s speech in a long time. It is a bit odd but very, very nice.

“I have lost a few finals over the last few years so I know how hard it is to win tournaments.

I feel very proud of myself and proud of my team. I am enjoying my tennis. I love Nottingham. I love this Centre Court. It is a beautiful court to play on. I hope you enjoyed it. I know we enjoyed it.”

Kona now has a 6-1 record against Shuai. The Chinese No 4 seed said: You always play so well against me. Next time I will try to play better against Jo.”

We’ll be bringing you the very latest updates, pictures and video on this breaking news story.
For the latest news and breaking news visit: express.co.uk/sport/football
Stay up to date with all the big headlines, pictures, analysis, opinion and video on the stories that matter to you.
Follow us on Twitter @DExpress_Sport – the official Daily Express & Express.co.uk Twitter account – providing real news in real time.
We’re also on Facebook @DailyExpressSport – offering your must-see news, features, videos and pictures throughout the day to like, comment and share from the Daily Express, Sunday Express and Express.co.uk.