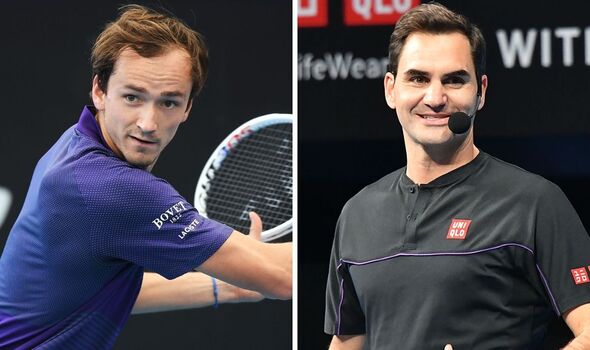 Daniil Medvedev has opened up on one of his big regrets more than three months after Roger Federer’s emotional retirement. The world No 7 shared his disappointment at failing to get the chance to face the 20-time Major winner after reaching the peak of his game but said he was more motivated than ever to face Rafael Nadal and Novak Djokovic, calling it a “privilege” to meet the two tennis icons on the court.

Medvedev started his 2023 season strong with a dominant run to the Adelaide semi-finals, failing to drop a set en route. The 26-year-old could now face Djokovic in the first event of the year as he awaits the winner of the Serb’s clash with Denis Shapovalov, and the Russian is relishing the prospect of their 13th meeting.

“Oh, yeah, playing against Rafa and Novak is a privilege,” the former world No 1 said when asked if he’d also want the chance to face Nadal early in the season. And the comment made Medvedev reflect on his missed opportunities against Federer, who ended his 24-year career at the Laver Cup in September.

He continued: “I’m disappointed that when I started to play better, went into the top 10, I didn’t manage to play Roger because I lost to him three times. I was already not bad but I was not where I am right now.”

But the 2021 US Open champion was using it as extra motivation against the two active members of the Big Three as he welcomed the chance to potentially face off during the Australian summer after losing to Nadal in the 2022 Aussie Open final after leading by two sets. “I still have the chance to play Rafa and Novak, and every time I have this chance, I want to win. I want to try to do my best,” he added.

“I had some tough losses against both of them, but the only Slam I won was against Novak, and it was great. I’m happy to play against them.” The world No 7 also zoned in on Djokovic as his potential next opponent in Adelaide as he explained what made the 21-time Grand Slam champion so tough to beat.

“Yeah, I think it’s still tennis-wise firstly, stuff against him, he doesn’t miss. He runs amazing,” Medvedev said. “Even like against Halys, I didn’t see that many points, but I saw a few. I remember it was 15-30, 5-all, second set, and Halys made a point where he would probably win it against everybody except maybe five guys who know how to win the game and know how to move well, and Novak is for sure one of them.

“You know that you have to put the ball four times on the line, maybe full power to win the point. He serves pretty big, even if it may not seem like this; he’s one of the best returners of all time.”

But Medvedev admitted that it made it even more rewarding when he was able to defeat the world No 5, adding: “All this makes it tough, and on top of this mentally he’s a machine. He’s capable of saving match points in the Grand Slam finals. He’s capable of beating you when you serve for the match. Yeah, it’s just very tough, but this is what makes it sweet when you manage to overcome this challenge.”