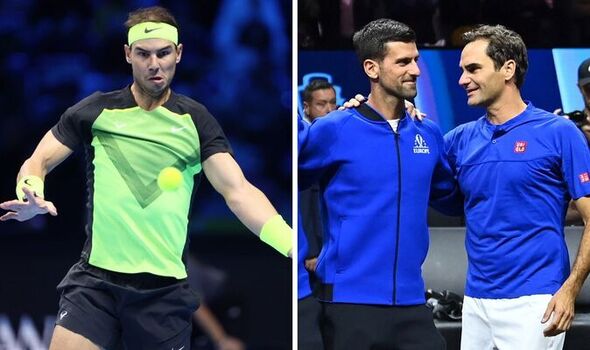 Rafael Nadal said he wanted to see the game of tennis change to offer a “more diverse style of play” after he, Novak Djokovic and Roger Federer had been forced to adapt to keep up with the sport and keep winning. It comes after a 2022 season that saw Nadal and Djokovic win three of the four Majors, while all-rounder Carlos Alcaraz picked up the US Open crown.

Nadal has shared his frustration with modern tennis as he admitted he wanted to see the sport change to see players using different tactics and game styles during matches. The world No 2 spoke during his South America exhibition tour with Casper Ruud after touching down in Argentina for their first match.

With the 36-year-old nearing the latter stages of his career, he was asked what he thought about the current stage of the game while sitting alongside 23-year-old Ruud, who enjoyed a career-best year by reaching finals at the French Open, US Open, ATP Finals and Miami Open. “In a personal opinion, as a show, I would like to see tennis that offers more opportunities, more diverse styles of play,” the 22-time Major winner said.

“Today, because of the way it is played and the courts or balls are made, I think most people play a very similar style, the speed at which it is played and the conditions have so little room to start a game. tactic or a different thought. Everything is going too fast to propose something different, to have time to think, as it could happen on clay.”

And the Spaniard used himself and his fellow Big Three members as an example as he explained that tennis was different when they first started competing, but they had been able to change their tactics to keep up. He continued: “Tennis has changed, when I arrived on the circuit it was played in a different way, the Big Three has had to adapt to remain competitive and improve.”

While Nadal admitted he had still achieved success in the modern era, he thought it would be nice to see players have more time to think during matches, adding: “Things have gone very well for me, I can’t complain, but I like another type of sport more where you can prepare plays.”

The 92-time title winner has more than proven his ability to adapt to the modern game as he won two Grand Slams this year, while fellow Big Three member Djokovic won Wimbledon. But one young player looked to be answering Nadal’s wishes, with Carlos Alcaraz winning the US Open and becoming the youngest world No 1 in history as a result.

The 19-year-old has continually been praised for his ability to do it all with his game at such a young age. Speaking about his victory in Flushing Meadows, where Alcaraz became the first teenager to win a Grand Slam since Nadal himself in 2005, Australian tennis legend Todd Woodbridge said the young Spanaird’s game proved that tennis was changing as he said: “The performance that he put on at this tournament was just a joy to watch, and really made me feel like tennis is in that transition, and it’s going to be amazing. I didn’t expect we’d have this quality of play this early from the next generation.”