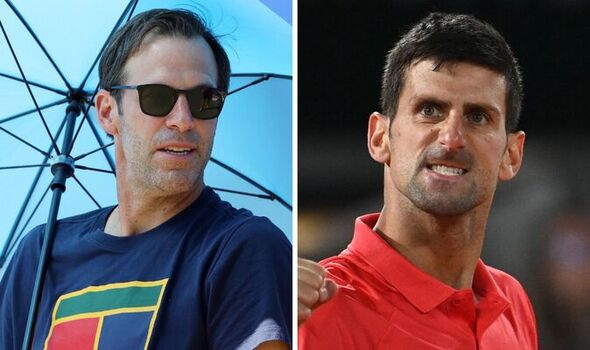 Novak Djokovic “is angry” about not winning a major in 2022 so far, according to Greg Rusedski. Djokovic has had a frustrating time in 2021 so far, which started with a vaccine fiasco in Australia where he was eventually deported just hours before the start of the tournament.

He eventually made his first appearance of the year at the Dubai Tennis Championships, but was playing catch up to those already up to speed for the season in competitive matches. It wasn’t until the Rome Masters last month that Djokovic picked up his title of the year after beating Stefanos Tsitsipas in the final.

But the following week saw him lose to rival Rafael Nadal in the quarter-finals of the French Open with the Spaniard going on to win his 22nd major. Heading into the Australian Open at the start of the year, most of the talk was about Djokovic becoming the first male tennis player to win 21 majors.

But Nadal has now created some breathing room ahead of Djokovic with Wimbledon just around the corner. The 36-year-old has confirmed that he will compete at Wimbledon while he continues to recover from a foot injury.

He has every chance of winning the calendar slam, but Matteo Berrettini will also be among the favourites after picking up two grasscourt titles on his comeback. Rusedski feels both Berrettini and Nadal will be Djokovic’s closest rivals to win Wimbledon.

But the former British No 1 also warned others that they face coming up against an “angry” Djokovic.

“The problem you have is, you have players who have the potential but winning is a totally different thing,” he said on Amazon Prime. “Making the finals is one thing, but you have to have this mindset that’s absolutely insane these days because of the big three or four we’ve had over the generations.

“Djokovic is angry because he hasn’t won a slam this year and the way he went out to Rafa in the French Open will have hurt him. Rafa’s trying to go for the calendar slam. He wouldn’t be showing up if his foot wasn’t 100 per cent and he was ready to go and Berrettini has been by far the best.

“Hurkacz is a guy who can go deep – semis or final – but win? Not with those three. Those three guys at the moment have separated themselves from the pack.”