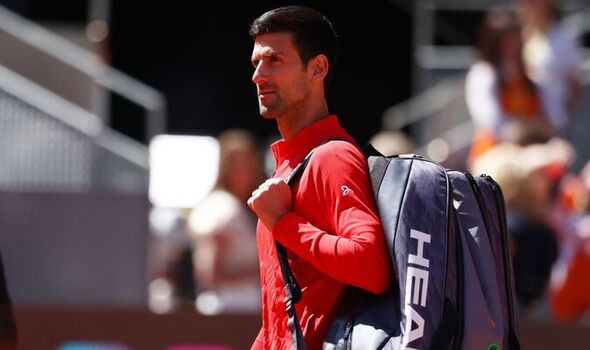 Novak Djokovic has learned what he must do at next week’s Rome Masters to hold onto the world No 1 ranking after losing to Carlos Alcaraz in the Madrid semi-final. The Serb will be bidding to go into the French Open as the top seed, where he is the defending champion, with world No 2 Daniil Medvedev’s impending injury comeback threatening his ranking.

Djokovic faced the man he called one of the “two best players this year” for the first time in Saturday’s Madrid Open semi-final. He led the teenager by a set and had a chance to break and serve for the match in the second but ended up falling in three as Alcaraz advanced to the final.

The Serb is currently under threat of losing his world No 1 ranking to Medvedev, with the 26-year-old recently announcing his return from a hernia surgery as he will play the Geneva ATP 250 before the French Open, after many expected the Russian to miss out on the clay-court Major. And with his loss to Alcaraz, Djokovic will now be under pressure to perform in Rome or lose his spot at the top.

As last year’s finalist, Djokovic is defending 600 points in Rome. He also had 500 to defend in Madrid from the 2019 final, which had been frozen to his ranking during the pandemic. He will now need to reach a second consecutive semi-final next week to stay the world No 1 when the rankings update on May 14, also the same day Medvedev’s comeback tournament begins.

JUST IN: Madrid finalist is richer than Federer, Nadal and Djokovic combined

With the US Open champion now confirmed to be back in time for the French Open, Djokovic will want to retain his ranking so he can go into the tournament as the top seed rather than the second. It will be another battle for the world No 1 ranking in Paris, with the Serb defending the maximum 2,000 points and unable to add any onto his standing.

Meanwhile, Medvedev is defending just 360 points after reaching the quarter-final last year and could gain up to 1,640 points if he outperforms his 2021 showing. The 13-time title winner has already managed to steal the top ranking from Djokovic once this season, ascending to world No 1 for the first time on February 28 after the Serb crashed out of the Dubai Championships in the quarter-finals.

He became the first man outside of Djokovic, Nadal, Federer and Murray to sit atop the rankings since February 1 2004. The 20-time Major champion then regained the ranking when Medvedev lost his first and only match as world No 1 to Gael Monfils in Indian Wells, and has stayed there since.