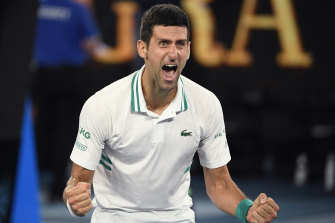 Djokovic’s ninth Australian Open triumph was his third on the trot, the second time in his career he has won three consecutive majors at Melbourne Park.

It was also the 33-year-old’s 18th grand slam victory, putting him only two majors behind Roger Federer and Rafael Nadal who hold the record for most male grand slam wins on 20.

Djokovic’s ninth Australian Open is not quite the 13 French Open titles won by Nadal, although it could be argued it is nearly as significant given the ubiquity of hard courts in modern tennis, as opposed to the clay of Roland Garros which is Nadal’s speciality.

Medvedev began strongly but wilted as the match went on, the loss his first in a 20-match winning streak which included victories over top 10 players on 12 occasions.

The Russian had also beaten Djokovic in three of the pair’s last four clashes, most recently at the ATP Finals in England late in 2020, but the Serbian simply had a greater variety of ways to win points and made many less errors on this night. 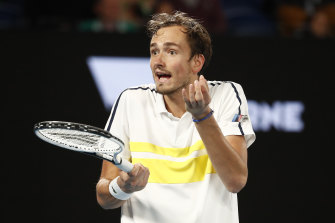 Daniil Medvedev shows his frustration during his loss to Novak Djokovic in the final on Sunday night.Credit:Getty Images

The first set was as sensational as this year’s tournament has seen. Points were often long but this was not a boring baseline battle.

It was more akin to watching two ball machines hitting at each other such was the crispness and robotic efficiency of some of the striking. And instead of being rooted to the spot those ball machines were programmed for near perfect court coverage and anticipation of their opponent’s next move.

Both of these players are noted for their court coverage and defence – that is they regularly hit balls back over the net that should be winners – and such remarkable shots were a feature of this encounter.

The pair traded early breaks and it was even until late in the set when the Serbian broke again.

Medvedev could have hardly played better tennis in the first set, which only proved how dialled in Djokovic was, his self-proclaimed muscle “tear” in his abdomen ancient history.

Not only was the magnitude of the challenge facing Medvedev represented in Djokovic’s first set performance and record at Melbourne Park, it was also potentially clear to him in the rankings forecast.

If the Russian had beaten Djokovic he would have jumped two places to grab the world No.2 spot. In doing so, Medvedev would have become the first man outside the big four (Djokovic, Rafael Nadal, Roger Federer and Andy Murray) to hold that ranking since Lleyton Hewitt did in 2004.

However, this did not rattle Djokovic. The Serbian broke back swiftly in the second set and ran away with it, and also held a 3-0 in the third set.

Medvedev, in his second grand slam final, had been in this position before. In his first grand slam final against Nadal at the 2019 US Open the Russian came from two sets to love down to force a fifth set.

But the efficiency of Djokovic’s power, precision and the depth of his shots stopped this from happening again, and the final two sets were considerably more one-sided than the first.