History, luck and science all appear to be on Nick Kyrgios’ side after he became just the third player in grand slam history to receive a walkover into a final, giving him a luxurious four-day break leading into his shot at Wimbledon glory.

Kyrgios had tipped his semi against Rafael Nadal would be the most-watched match of all time, but the Spaniard’s withdrawal due to an abdominal tear has robbed the tennis world of what loomed as a fascinating encounter.

Instead, Kyrgios was given a free pass into Sunday night’s (AEST) men’s singles final at the All England Club, with Nadal succumbing to injury pre-match at a grand slam for only the second time in his storied career.

In the modern era, only two other players have been in Kyrgios’ shoes and skipped the semis en route to a grand slam decider – Steffi Graf, at the US Open in 1988 when her semi-final opponent Chris Evert pulled out with illness, and Jim Courier at the 1992 Australian Open after Dutchman Richard Krajicek cited shoulder tendonitis.

Both Graf and Courier went on to win those respective titles – and not having to engage in what would have likely been a typically gruelling, multi-hour battle with Nadal should give the 27-year-old showman every chance to do the same, according to Australian tennis great Wally Masur. 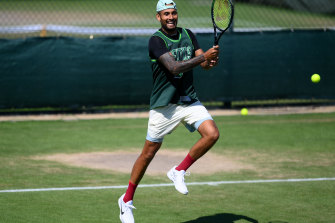 Nick Kyrgios is in a “pretty sweet position”, according to Wally Masur.Credit:Getty

“Pretty good position, really, because he can beat Rafa – even a fully-fit Rafa, he can beat him, but you’re going to pay a price for that win,” Masur said on Stan Sport’s Grand Slam Daily.

“Nick now, he’ll be absolutely as fresh as a daisy. And you’ve got to consider, too, you battle Rafa for four hours – lefty [left-handed]. If he plays Djokovic potentially in the final, there’s a righty, so all of a sudden you’ve got a different game style you’ve got to adjust to.

“Now he can kind of sit back, tailor his practice according to his needs, he’s got two days to contemplate that … this is a pretty sweet position for Nick to be in. And you’d say he’s lucky, but he was the guy who put himself in the position to take advantage.”

Kyrgios may very well need the extra time after struggling with a shoulder issue through much of his Wimbledon campaign, notably his five-set fourth-round win over American Brandon Nakashima, which he needed painkillers and two medical time-outs to get through. He has spent just over 13 hours on court so far in the tournament, with his quarter-final victory against Chile’s Cristian Garin his second-highest match for distance covered per point (12.6m).

“This is the deepest he has been with consecutive matches in a slam – so the accumulated load will likely be the largest he has faced in a slam environment,” said Professor Rob Duffield, a researcher into fatigue, recovery and performance in sport at the University of Technology Sydney.

“Whilst players like to have that continuity of match exposure for technical fluency and rhythm, the risk of a potential 4-5 setter in a semi versus getting time on [a] practice court in a controlled manner likely means having the additional days off are in his favour. He’s also had a bit of centre court exposure recently, so has some familiarity with the court surface. Plus, if the other semi goes deep into a four or five-setter and Nick has the additional time off, from a physical perspective, that extra day or so off is likely to be of benefit.”

Masur suggested while some players in the same situation might be at risk of over-thinking their gameplay or tactics with the bonus preparation time, the challenge for Kyrgios will be keeping the fire burning.

“Nick’s a different character and he’s got so much game. He probably has always believed he’s got the potential to win a slam,” he said.

“But sometimes for lesser ranked players … when Nick sat down and really reflected on that quarter-final victory, you don’t know you’re doing it, but you give yourself a pat on the back for getting this far. You don’t articulate it, but something happens, and you step out onto court for your next match and you’re not quite where you were, you don’t have that same sort of hunger, desire, adrenaline or nerves. You almost feel a bit self-satisfied.

“For Nick, that’s the issue. Don’t be complacent, keep that hunger and energy, everything that’s fuelled him to this point – just maintain the rage.”

Watch all the action from Wimbledon ad-free, live & on demand on Stan Sport, with matches streaming in 4K UHD. Coverage of select matches commences on 9GEM from 7:30pm AEST each night.