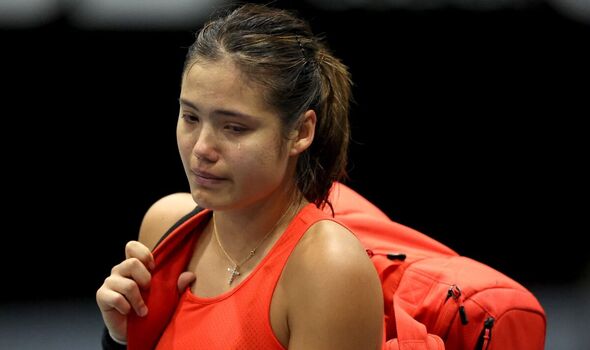 Emma Raducanu has travelled to Melbourne for the upcoming Australian Open after injuring her ankle at the ASB Classic. The British No 1 retired from her second-round match in tears on Thursday and is yet to learn the extent of her injury but is hoping to be ready in time for the first Grand Slam event of the year.

Raducanu has reportedly travelled to Melbourne ahead of the upcoming Australian Open despite suffering a blow when she slipped and turned her ankle during her match against Viktoria Kuzmova on Thursday. The 20-year-old took the opening set 6-0 but fell near the end of the second set, losing it 7-5 and deciding to retire from the match as she was in floods of tears while leaving the court.

The Brit is expected to get a scan to determine the extent of her injury but, according to the Daily Mail, her team believe that the best case scenario would be a grade one sprain. If that proves to be the case, it means that Raducanu will be able to play the Australian Open when the first Major of the year gets underway on January 16.

There had also been talk over the world No 78 playing next week’s WTA 250 event in Adelaide but that is now all but ruled out following her horror injury fall at the ASB Classic. Speaking after retiring, Raducanu shared her disappointment to be set back by another physical issue after spending the off season improving her strength and fitness with Andy Murray’s ex-trainer Jez Green.

JUST IN: Novak Djokovic piles praise on Medvedev ahead of mouthwatering clash

“It’s difficult to take,” she said. “I’ve put a lot of physical work in the last few months and I’ve been feeling good and optimistic. So to be stopped by a freak injury, rolling an ankle is pretty disappointing, in the first week as well. I thought I was playing some pretty decent tennis.”

Raducanu also criticised the condition of the indoor courts at the ASB Classic after her match was postponed and eventually moved inside because of the rain. “The courts are incredibly slick, like very slippery, so to be honest it’s not a surprise that this happened to someone,” she added.

ASB Classic tournament director Nicolas Lamperin has since responded to Raducanu’s comments and hit back at her suggestion over the court conditions. “We are obviously very sorry about Emma’s injury,” Lamperin told 1news.

“As every player they work really hard in the off-season, that’s not what you expect when you play a tournament in week one.” He then defended the decision to use the indoor courts, adding: “The courts have been checked and we’ve had a number of matches on the indoor courts. We haven’t had an injury apart from yesterday.

“As far as the tournament is concerned, with the support of the referee and the supervisor, we are able to play and use this court. We always start with a schedule for outdoor courts and then when we get closer to the time, if we realise that the conditions are not going to be suitable we need to move indoors but that always takes time. We need to warn the players, the players need to eat, they need to warm up again. There’s always a little bit of delay when we move from outdoor to indoor.”

Lamperin also expressed his concern for Raducanu as he continued: “I want to make sure she’s okay, this is my number one priority. It’s 10 days ahead of the Australian Open. She’s coming from a season with a lot of injuries so of course this is something which creates frustration. We will have a discussion whether it’s with her or her management for sure and we’ll take it from there.”

‘Player to beat’: Djokovic due to arrive in Australia on Tuesday