LIVE: Emma Raducanu vs Shelby Rogers – British teen sensation breaks BACK in first set of US Open fourth round as she looks to earn a place in the quarter-finals after stunning run in New York

Emma Raducanu is looking to keep her remarkable US Open journey going as she faces American Shelby Rogers for a place in the quarter finals.

The 18-year-old British sensation has won all 12 of the sets she has played in New York across qualifying and the main draw so far.

But Rogers will be full of confidence herself, after seeing off world number one Ash Barty in the last round.

It’s Rogers starting to make more unforced errors now, a wild shot lands well wide before she dumps a backhand into the net. 15-30.

And now two break points! Raducanu with the chance to take charge of this set.

Rogers saves one, but another unforced error follows… Raducanu breaks! Massive moment for the Brit.

Another brutal rally ends with Rogers hitting it long again, Raducanu getting so much depth on her shots.

She holds to 15… the first relatively easy hold of the match, and she leads for the first time!

Rogers fighting fire with fire – both players not holding back with their groundstrokes.

It’s Raducanu’s backhand that does the damage to get it to 30-30… can she get herself a break point? Yes is the answer as Rogers finds the net.

And she takes it! A roar of delight from the Brit, as Rogers’ backhand drops long. Brilliant from Raducanu to get this back on serve.

Massive swinging volley at the net from Raducanu which she puts away beautifully. Looking to go big at every opportunity.

Double fault though, and then a forehand is well long. 15-40, two break points for Rogers. Two first serves at just the right time for Raducanu, and she saves the break points.

And she holds serve! Big game that, a real confidence booster for the Brit to get on the board.

Raducanu has proved so strong at returning so far this tournament, and it’s on show again as she gets a first chance on the Rogers serve at 15-30.

Brilliant, deep return from the Brit and Rogers can only hit it into the net. 30-40… break point Raducanu. She can’t get the serve back though – deuce.

More powerful hitting from the American, and Rogers holds to consolidate the break of serve. 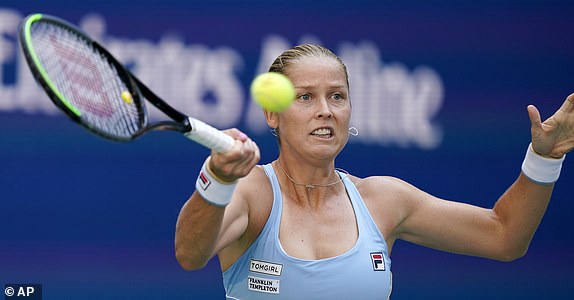 The American has another break point though, putting on the early pressure. But again Rogers can’t take advantage, as she fires a forehand long.

Raducanu’s turn to make an error, and it’s a third break point. The Brit works the point well though, and puts away the forehand. Deuce again!

The 18-year-old is having to battle… but two unforced errors follow and Rogers does get the break. Raducanu loses her serve in the first game.

Rogers finds the net with a second serve return, and the Brit wins the first point of the match.

Both players with some slightly edgy unforced errors as they look to find their feet. And that’s not going to help… double fault from Raducanu gives Rogers a break point.

Big first serve, even bigger forehand from the Brit. Deuce.

Here we go then.

After a quick adjustment of the camera on the net by the umpire, it’s time to get underway.

Raducanu and Rogers are walking out on court. The Brit leads the way, and she can’t keep the smile off her face.

Only a few minutes away now. Winner will face Belinda Bencic, the Olympic champion, in the last eight.

Rogers won’t exactly be short of confidence though.

She set up this clash by beating world number one Ash Barty in three sets. The American will also be hoping to get some home support from the crowd, even though Raducanu has proved to be extremely popular so far.

Raducanu’s time at the US Open could not have got any better. Last time out she roared past Sara Sorribes Tormo, losing just one game.

You can read more about that one here…

And welcome to our coverage of the US Open last 16 clash between Emma Raducanu and Shelby Rogers.

The 18-year-old has been in imperious form so far in New York – can she keep it going to reach the quarter finals?

All the build-up and live coverage right here.

Roger Federer, Rafael Nadal and Serena Williams Wimbledon claim made ahead of cancellation