Roger Federer: The fans are the centre of everything

Rafael Nadal was left amazed by a Roger Federer shot as the duo practised ahead of their Laver Cup doubles match on Friday night. Federer is set to take to the court for the final time as a professional alongside his long-time rival when they face Frances Tiafoe and Jack Sock at the O2 Arena in London.

Nadal and Federer are part of the Team Europe squad taking on the Team World squad this weekend. And the duo took to the court together ahead of their showdown as they hit with team-mates Novak Djokovic and Andy Murray.

As the practice session was coming to an end, Federer thrashed a delightful backhand over the net. And the shot clearly impressed Nadal as the Spaniard gasped before smiling and shaking his head in a sign of appreciation. He then high-fived his team-mate before the duo shook hands with Djokovic and Murray.

Federer has enjoyed an incredible 24-year spell on the ATP Tour and has won 20 Grand Slam titles throughout his illustrious career. His first major triumph came at Wimbledon in 2003 as he defeated Mark Philippoussis in the showpiece event. And that victory initiated a spell of dominance for the Swiss ace as he went on to win 16 Grand Slam titles in 27 tournaments between 2003 and 2010.

JUST IN: Djokovic and Nadal given early tip off over Federer retirement plans 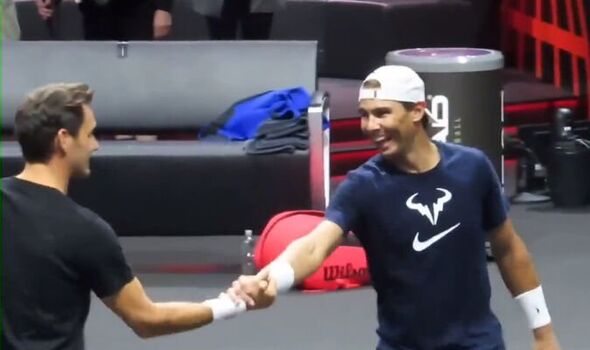 The blockbuster star won another four Grand Slam titles the following decade, but has struggled with injuries in recent years and hasn’t played a match since last year’s Wimbledon tournament.

Federer is now hoping to bow out of tennis on a high in London, with his doubles match scheduled to get underway at around 9pm. And before the competition began, the 41-year-old explained his decision to bring the curtain down on his career. “The Laver Cup next week in London will be my final ATP event,” he said last week. “I will play more tennis in the future, of course, but just not in Grand Slams or on the tour. 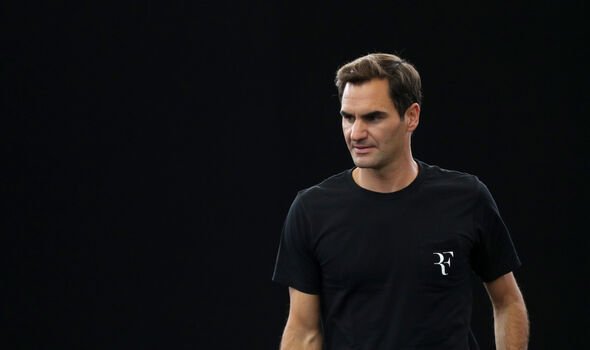 “The past three years have presented me with challenges in the form of injuries and surgeries. I’ve worked hard to return to full competitive form. But I also know my body’s capacities and limits, and its message to me lately has been clear.

“I am 41 years old. I have played more than 1500 matches over 24 years. Tennis has treated me more generously than I ever would have dreamt, and now I must recognise when it is time to end my competitive career.”

French Open set to be postponed by a week and will run from May 30 to June 13, according to reports