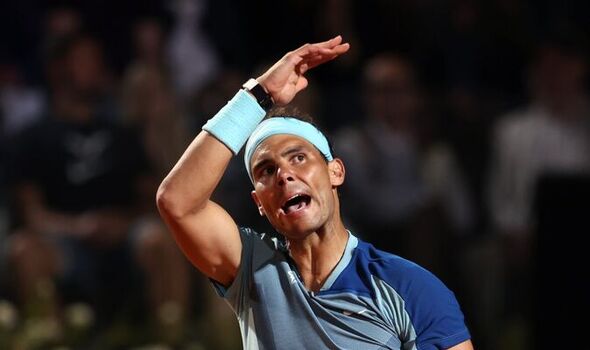 Rafael Nadal suffered an unwanted career first after his Rome Masters second-round exit against Denis Shapovalov on Thursday. The 21-time Grand Slam champion has featured in his final tournament before he aims for a record-extending major at the French Open.

After cruising past John Isner in the opening round, Nadal collapsed to a three-set defeat against Canadian world No 14 Shapovalov – 1-6 7-5 6-2 – on the Italian clay. And in doing so, it confirmed a career-first that won’t fill him with confidence ahead of Paris.

For the first time in his iconic career, the 35-year-old will arrive at Roland Garros without featuring in at least one Masters 1000 final in the clay season. Nadal has grown a reputation of being the ‘King of Clay’ on the ATP Tour and has won a record 13 of his Grand Slams on the surface.

But his defeat to Shapovalov followed a 6-2 1-6 6-3 loss against Spanish teenager Carlos Alcaraz. The 19-year-old went on to beat world No 1 Novak Djokovic and third-seeded Alexander Zverev to win the Madrid Open earlier this month, a second successive Masters 1000 title after his triumph in Miami.

JUST IN: Nadal’s ‘incurable’ injury has plagued him since 2005 despite success

Worries about his fitness have piled on Nadal’s sticky preparation for the French Open amid a chronic foot problem that appeared to stifle him during his defeat to Shapovalov. He has stated his intention to be fit and firing for the Paris major, which starts on May 22, but his condition is uncertain.

Not only has Nadal failed to win a Masters 1000 title in the build-up to the French Open, but he hasn’t lifted a single clay-court honour for the first time since 2004. And after his loss to Shapovalov, he hinted at retirement as pain risks outweighing his enjoyment of tennis.

He said: “Let’s see for how long I can keep going or until my head tells me otherwise because right now, I must accept my days are like this. There will be a moment where my head will ask me to stop because I cannot keep going not just thinking about tennis but thinking about normal life.

“That’s my reality,” a disappointed Nadal continued. “With such a daily pain, it is hard for me. I have to tell this several times, I play to be happy and because playing makes me happy, but sometimes the pain takes away that happiness.”