Roger Federer reveals how he's practising at home in 2020

Roger Federer beat Dan Evans in his first competitive match for 14 months – but admitted afterwards the victory was not pain-free. Federer defeated Evans 7-6, 3-6, 7-5 at the Qatar Open in Doha. The Swiss legend returned after double knee surgery in 2020 which kept him out of action for over a year.

Federer won the first set on a tie-break but it was Evans who levelled up in an even contest.

The pair had been training together for the last couple of weeks, getting each other up to speed.

The big question surrounding Federer was whether he, at the age of 39, had what it took to compete at the top level again.

He has already dispelled some of those myths but admitted the victory was not without pain. 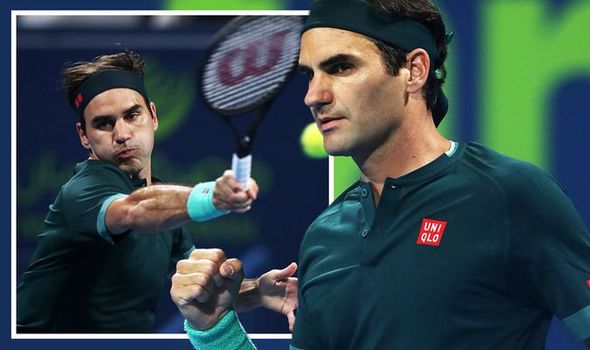 “Well I don’t know about ‘still pain-free’, I don’t know if it was ever completely pain-free,” Federer said in his on-court interview.

“You get to feel tired, you’re not sure if it’s the muscle or whatever is going on.

“But actually I don’t really mind, this is how I felt throughout.

“It’s important how I feel tomorrow and the next day and for the next six months basically. It’s been a long and tough road for me.”

Federer says his rehabilitation was enjoyable and praised his team who have got him back to a competitive level.

He continued: “I’ve enjoyed it though, it’s been a huge challenge of mine and to come back at my age is not something that is simple.

“I’ve had a wonderful team around myself that always supported me throughout and that made it much easier.

“It was worth it because I played a great match today.”

Federer is in search of his 104th tour-level title this week.

And he was thankful to play again in front of his adoring fans.

“Thank you very much, I appreciate it thank you. It feels good to be back,” he said.

“I’m happy to be standing here regardless of if I won or lost, but obviously winning feels better.

“It was a great match, Dan played a good match too. He’s been a wonderful training partner with me the last two weeks, we played over 20 sets.

“It’s great fun and thank you for the people who came out.”