Roger Federer stayed on course for a 10th title at his hometown Swiss Indoor tournament in Basel, dropping only three games in crushing Moldova's Radu Albot on Thursday (AEDT), while Australia's No.1 Alex de Minaur also picked up another easy win.

The 38-year-old Federer, who has lost just six games so far in the tournament, dispatched his hapless opponent in only 62 minutes winning the second-round match 6-0, 6-3. 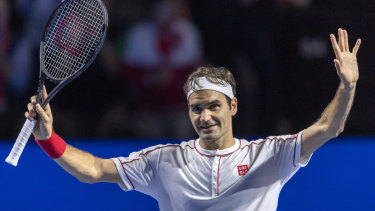 Roger Federer just keeps on rolling at his home tournament in Basel.Credit:AP

It was a 22nd consecutive triumph at the tournament for Federer who has claimed the title on the last four occasions he has taken part in Basel.

De Minaur was expected to have a challenge on his hands against American Taylor Fritz, who knocked out German second-seed Alexander Zverev in the previous round.

But the Australian managed to create 10 break points against the big-serving 21-year-old, converting four of them, and at one stage won five consecutive games en route to a routine 6-3, 6-3 victory. He will now play German Jan-Lennard Struff for a place in the semi-finals.

Albot had given Federer a tough time at the Miami Open earlier this year, losing in three sets in the second round, but offered little resistance this time around.

"I really struggled against him in Miami and he definitely got my attention there. I was basically a point away from losing," said Federer. "I think I learned a lot from that match.

"I really respect Radu. He tries everything to win in a really tough and great and fair way. I’m very happy with the way I played. I had an answer for everything he threw at me today and that’s great."

David Goffin, who had lost his previous three matches to Marin Cilic, ended that run with a 6-4, 6-4 win in a first-round match. The Belgian is now a strong contender for one of the two remaining places at the end-of-season finals in London.

Goffin fired 11 aces, compared to four for the usually big-serving Cilic, and converted all three of his break points as he claimed his first win over the Croatian since 2016.