As she assessed another superb performance at Melbourne Park on Thursday, Aryna Sabalenka crossed herself and knocked on the wooden table she was sitting at.

The Belarusian was in impressive form in her 6-3, 6-1 victory over Shelby Rogers, an American veteran who possesses a similar though slightly inferior style to Sabalenka. 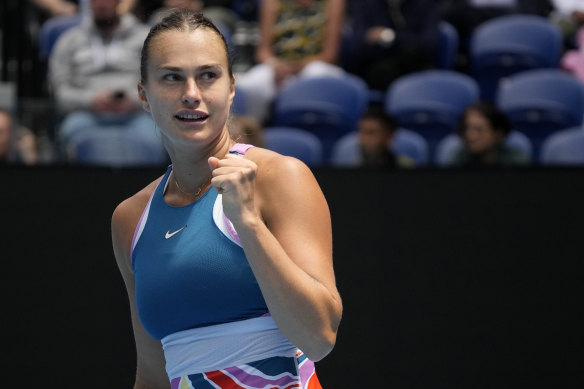 Aryna Sabalenka has cast off the serving yips … touch wood.Credit:AP

That is not a slight on the 30-year-old Rogers, for when her 24-year-old opponent is in the touch she is currently in, there are few women in the world capable of reaching her heights on the court.

The Sabalenka of 2023 is a starkly improved model from the player who was in Melbourne 12 months ago in a couple of ways, but one aspect in particular is critical to her title claims: her serve.

Touch wood. And touch wood again. For a year ago Sabalenka had the serving version of the yips, striking double-faults to the point it was heartbreaking. Sabalenka was the No.2 in the world behind Ash Barty. But she struggled to start a point.

In a second-round match against Xinyu Wang, for example, she served nine double faults in her opening two service games. It was happening match after match. But not anymore.

“Oh my God. I did, I think, almost everything to try fixing my serve,” she said.

“Like the whole year, we were trying different things, mentally, technical [stuff], trying to breathe differently.

“I was watching a lot of videos of my serve and we just started working with a biomechanic guy at the end of last year and it’s helped.”

Rogers managed something against Sabalenka on Rod Laver Arena that no other rival has to date this year – namely, breaking her serve in the third game of the match.

But that aside, the fifth seed was untouchable on the delivery, which also proved critical to her recent title success in Adelaide.

The key stats? Twenty of the 49 first serves she struck were unreturnable. And she did not strike a double fault for the match. Hence Sabalenka’s determination to touch wood.

“You can’t even imagine how much I worked [on it],” she said.

“I’m just super happy right now that everything is working. I mean (touching wood), usually when you say something like that, it is (going to come back and hit) you there in the arse.”

She clipped her fastest serve at 190km/h and her average first serve speed was 174.1km/h. Sabalenka sits third behind Wimbledon champion Elena Rybakina (195km/h) and Coco Gauff (194km/h) in terms of the fastest serve struck in the women’s draw this year.

Verification of service speeds can be an issue given differences in the technology used at events around the world, but a 214km/h serve struck by Sabalenka at the Elite Trophy Tournament in 2018 won by Barty is the second quickest recorded.

Georgina Garcia Perez is recorded as striking a serve at 220km/h at the Hungarian Open in 2018, while Serena Williams’ fastest first serve of 207km/h came at Melbourne Park in 2013.

Williams is widely considered to have possessed the greatest serve in women’s tennis.

While Sabalenka said she did not model her serve on anyone else, she loved the American’s delivery.

“I was just hitting the ball as hard as I could. And I was hoping that one day I would find the right target,” she said.

“I always was an aggressive player and I always, as a kid especially, wanted to finish it easily on my serve. So probably that’s why I hit it hard.

“But yeah, answering your question, I didn’t really look to anybody, but I liked how Serena dominated on her serve. Of course.”

It is worth noting speed is not everything in tennis. Precision, disguise, the ability to slice or to kick the delivery and also reliability under pressure arguably matter more.

Barty and Roger Federer are examples of brilliant servers who rarely smashed their serves at full throttle.

Sabalenka, who has made three grand slam semi-finals, has all of the ingredients when confident. Touch wood.

She was a finalist in the WTA Tour Finals last year, a run that included a triumph over Iga Swiatek. If her nerve and serve holds, she will be difficult to beat in Melbourne.

For daily updates of all the tennis action during the Australian Open, sign up for our Sport newsletter here.