In a grand slam result for the ages, a boilover in which no-one was left unsure about Daniil Medvedev’s hardcourt capabilities, it wasn’t only the Russian’s brutal game and have-no-fear mentality that impressed.

Instead, it was Medvedev’s perfectly-timed graciousness – amid intense disappointment for Novak Djokovic – that shone through on the New York stage. 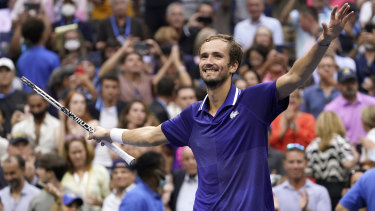 Medvedev, aged 25 and hardly a slouch as the world No.2, has been coming for some time but like his peers in the men’s game, winning majors has been more a pipe-dream than a natural progression. While Roger Federer and Rafael Nadal were missing this time at the US Open, it was Djokovic who had again given no-one else a look throughout 2021.

Thus, after Medvedev’s clinical performance to defeat Djokovic in straight sets and end the world No.1’s desperate dream to win the grand slam – the hardest achievement in tennis and not managed by a man since Rod Laver in 1969 – the Russian would have been forgiven for basking in his own personal glory.

The celebrity-laden crowd on centre court at Flushing Meadows had arrived to witness history, after all. Laver, himself, was front and centre in the stands. First-up majors are bloody hard to win.

In offering his apologies, Medvedev – humbled by Djokovic at Melbourne Park in February in the only other hardcourt major final this year, don’t forget – read the room and went one better in his speech.

“First of all I want to say ‘sorry’ for you fans, and Novak, because I mean we all know what he was going for today,” said Medvedev.

“With what you have accomplished this year and throughout your career, I never said to anybody [before] but I’ll say it right now – for me you are the greatest tennis player in history.” 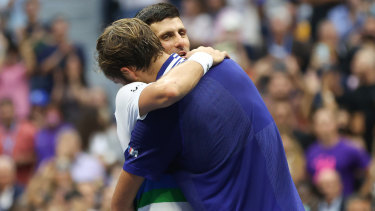 Djokovic and Medvedev embrace after the US Open men’s final, which the Russian won in straight sets.Credit:Getty Images

The unexpected 6-4, 6-4, 6-4 defeat, pulled together in an eye-catching two-hour and 15-minute display in which Medvedev barely gave Djokovic a glimpse on his own serve means, tantalisingly, the Serbian remains locked with Federer and Nadal on 20 grand slam titles.

But in terms of active players on the tour, it’s Djokovic, Federer, Nadal and then daylight and then plenty more on the counter of major titles won. Medvedev has matched 2020 champion Dominic Thiem by breaking through in New York. Yes, one major title won does offer the promise of more to come.

But, pressed later on whether he was really sympathetic to Djokovic’s plight – “sorry, not sorry,” if you like – there was no mistaking Medvedev’s respect for the world No.1’s current standing, highlighted by his extraordinary winning record at the majors in the past two years – only losing to Nadal in last year’s Roland Garros final and being defaulted in New York. 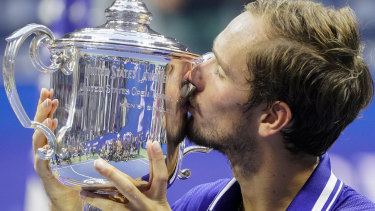 Daniil Medvedev, of Russia, kisses the championship trophy after defeating Novak Djokovic in the men’s singles final of the US Open. Credit:AP

“I do feel sorry for Novak because I cannot imagine what he feels. I don’t know this feeling. It definitely makes it sweeter. I mean, a grand slam is a grand slam,” said Medvedev. 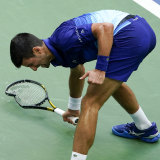 Novak Djokovic smashes his racket on the court after losing a point to Daniil Medvedev.Credit:AP

“[For my] confidence and for my future career, knowing that I beat somebody who was 27-0 in a year in grand slams, I lost to him in Australia, he was going for huge history, and knowing that I managed to stop him it definitely makes it sweeter and brings me confidence for what is to come on hard courts so far, but let’s see about other surfaces.”

Medvedev will forever be etched in tennis history books as THE player who upset the Djokovic applecart, maybe one day remembered as the tennis version of the bowler who got Don Bradman out for a duck in his final innings.

Djokovic was left drained by his effort in getting within a whisker of the elusive slam, evidenced by his post-match tears as he buried his head in his towel. The 34-year-old conceded this year’s arduous campaign, including his time at the Tokyo Olympics and a series of tough matches in New York before the final, may have played a role.

But Medvedev nailed his own game when it mattered most – he “executed it perfectly” according to Djokovic, while all facets of the Serbian’s game were “below par”.

“I had more hours on the court spent from Daniil, that’s for sure,” said Djokovic.

“But [it] was also emotionally very demanding period for me in the last five, six months. Slams and Olympics and playing at home in Belgrade. Everything was coming together for me here and kind of accumulating all the emotions that I’ve been through.”

Hard-to-swallow defeat in New York was hardly the end of the line for a player who is a glutton for success.

“Unfortunately I didn’t make it in the final step,” said Djokovic.

“But when you draw a line, you have to be very satisfied with the year. Three wins, three slams and a final.

“For the last couple of years I’ve been very transparent and vocal about my goals, to play my best tennis at slams. I’m managing to do that.”

While Djokovic believes that the “transition” to the next generation probably started with Thiem’s US Open breakthrough 12 months ago, the Serbian himself is hardly done.

“In tennis we learn very quickly how to turn the next page. Very soon there are some more challenges, more things that are coming up. I have learned to overcome these kind of tough losses in the finals of slams, the ones that hurt the most,” Djokovic said.

“I’ll try to take, draw some lessons from them, learn, be stronger, and keep going, keep going. I still love this sport and I still feel good on the court. As long as there is motivation and that flair, I’ll keep riding.”

His glorious ride throughout 2021, however, ended with a sudden jolt.

‘Doesn’t see the joy’: McNamee saddened that Kyrgios has a disdain for clay