World No.1 Iga Swiatek has pulled out of next week’s second Adelaide International event to manage a shoulder issue, while Venus Williams has withdrawn from the Australian Open.

Jessica Pegula and Madison Keys are also skipping Adelaide 2.0 after the United States qualified for the United Cup final. Carlos Alcaraz (leg) announced on Saturday that he would not compete at the men’s Australian Open in Melbourne later this month. 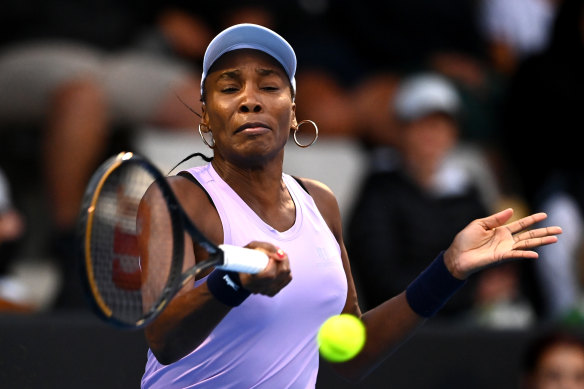 Venus Williams in action in Auckland.Credit:Getty

Williams, 42, somewhat controversially received an Australian Open wildcard despite her age and failing to win a match last year, but the American displayed improved form in Auckland this week. Her wildcard now goes to Australia’s Kim Birrell, who last played in the main draw at Melbourne Park two years ago and reached the round of 32 in 2019.

Swiatek has had a big couple of days, including breaking into tears after a lopsided defeat to Pegula in the United Cup semi-finals when she felt “helpless”.

She is still expected to play in the Australian Open.

“As you all know, I love to play in Adelaide and I have nothing but best memories from tournament,” Swiatek said in a statement.

“Unfortunately, this year I have to withdraw from Adelaide International Two because of [a] shoulder issue and fatigue after United Cup. I’m really sorry for this and I hope to see you all next year.” 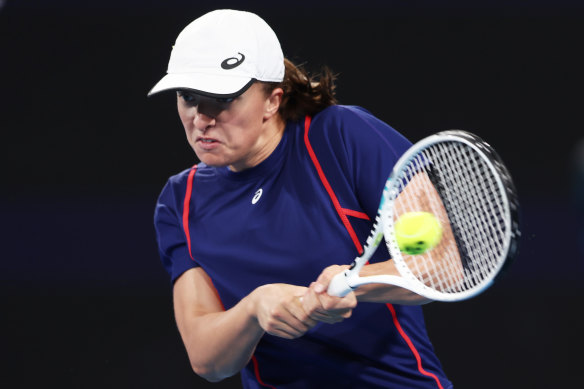 Meanwhile, Belarusian powerhouse Aryna Sabalenka has credited her extreme case of serving yips in Australia last year for the mental transformation that helped her reached her first final in the country.

The world No.5 is yet to drop a set in her march to the Adelaide International decider, with Romania’s Irina-Camelia Begu her latest victim in a 6-3, 6-2 cakewalk in only 78 minutes.

The result follows Sabalenka’s barnstorming run at the year-end WTA Finals, where France’s Caroline Garcia finally stopped her in the final after she downed Swiatek in the semi-finals. 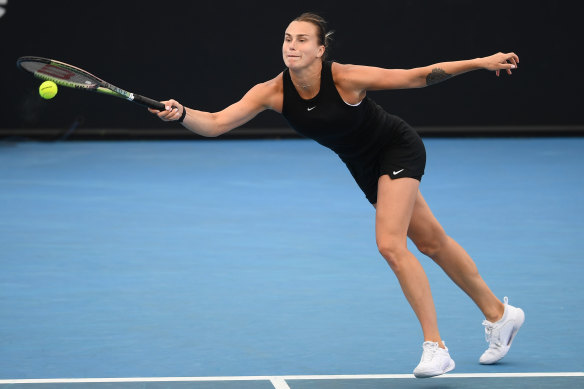 “I think last year when I was struggling with my serve; I understand that even without my serve, I still have something to play with,” Sabalenka said.

“It’s given me little bit of, not like confidence, but little bit of belief that no matter what’s going on, on the court, I can come back … so I think last year helped me a lot to understand that my serve is not the only weapon I have.

The first men’s finalist is also locked in, with American rising star Seb Korda advancing after Japanese opponent Yoshihito Nishioka retired hurt with a right leg injury while trailing by a set and 1-0, having also launched a tirade at the chair umpire for the second straight match.

None of Sabalenka’s 10 WTA singles titles were won in Australia – she made the Adelaide semi-finals three years ago – but she twice previously claimed Australian Open lead-in events at Shenzhen (2019) and Abu Dhabi (2021).

“I’m happy with the level I played today, especially [because] she’s playing a little different style, so I’m super happy that I was able to win this match,” Sabalenka said.

“I mean, any way [the other semi-final goes] is going to be a tough match. Both of them are playing really great tennis this week. I saw a couple of matches of both, and it’s going to be a great battle, and I’m really looking forward to this final.”

Sabalenka could not convert three break points in the fourth game of the match, but made no mistake two games later to snatch a 4-2 lead she never relinquished, albeit after fighting back from 0-40 in the next game.

Any chance of Begu staging a comeback evaporated when she double-faulted then dumped a forehand into the net to concede serve to start the second set.

Sabalenka added an insurance break in the seventh game before sending down her sixth ace of the match to seal her passage to the final.

The 24-year-old trailed 5-1 in her first match of the week against Russia’s Liudmila Samsonova but fought back to win that clash in two tiebreaks before defeating Marketa Vondrousova in straight sets.