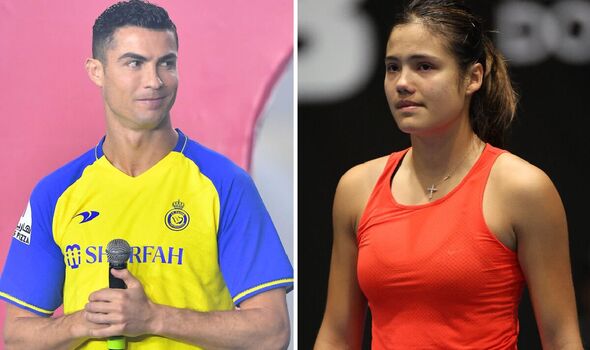 The tears which accompanied Emma Raducanu’s latest retirement were a reflection of the frustration she must be feeling. A solid bank of physical work in the off-season was supposed to have offered the British No 1 a fresh start in 2023.

The 20-year-old suffered a stop-start 2022 and was hoping for a healthier 12 months ahead but now the injury theme continues. Even the addition of Jez Green, Andy Murray’s former fitness guru, to her support team has failed to change the pattern.

With the Australian Open just 10 days away, her participation must be in doubt. There seems no end to the tunnel. Maybe she signed some sort of Faustian pact when she won that US Open.

Al-Nassr’s postponement on Thursday said everything about the way in which Cristiano Ronaldo’s career is ending. Heavy rain in the desert causing an electrical fault at the ground of Ronaldo’s new Saudi club was an unexpected development.

But it summed up the direction in which things have been going of late for him. The two-match ban carried over from his Manchester United days for deliberately knocking a mobile phone out of a young Everton’s fan’s hand is a reflection of Ronaldo’s fall from grace.

The petulance and poison which has accompanied his slide into irrelevance at the top level has been pitiful. The delay for Ronaldo’s debut hardly represents value for money for his employers but then again when you are paying £175m for a 37-year-old’s services value for money was obviously not much of a consideration in the first place.

Maybe his ‘new challenge’ in Saudi Arabia will see an upturn in his behaviour. After all, he will get picked every week once he is available and in a country willing to pay £175m to have him, his every whim will be catered for.

Now the darts is over Gerwyn Price’s ear defenders are going free. Maybe Frank Lampard might like to borrow them for Everton’s next home game.

The PDC World Championship’s role is to start the sporting New Year with a beery bang and rarely can that mission statement have been accomplished so emphatically. Michael Smith’s victory in an epic final against Michael van Gerwen was a triumph of the spirit which transcended darts.

You didn’t have to be a tungsten nut or an arrows aficionado to be engrossed. You could have been firmly seated in the sceptic’s corner in the pub game versus pro sport argument and still felt the match’s inexorable pull.

There was the darts itself, yes, including the Leg From The End Of The World but there was also the human element. You need a special level of persistence to keep coming back for more after losing eight major finals in a row as Smith had done, including the defeats at the 2019 and 2022 world championships.

That sort of run can erode a man’s belief and create a self-fulfilling prophecy of doom. But Smith was unwilling to be cast as the bearded bridesmaid forever. November’s win at the Grand Slam of Darts ended the losing sequence; Tuesday evening’s epic took him to the summit of his sport.

Unpolished, down-to-earth, straightforward and a family man through and through, he makes for a thoroughly likeable champion. The ‘Bully Boy’ moniker needs a revamp. He was, he said, in a revealing aside, disappointed to be missing the school run in St Helens because of his champion’s victory duties in London on Wednesday.

Even in the immediate dizzying euphoria of his career-defining triumph, he still had his priorities sorted. Asked stage-side if winning the world championship was the greatest moment of his life, he relegated his achievement beneath the birth of his children without missing a beat.

For his two boys and his wife Dagmara to be there at the Ally Pally to share his joy seemed to mean as much to him as the moment itself. Families suffer by extension in the black and white world of victory and defeat that sportsmen inhabit. Losses can be mini-bereavements.

Smith’s loved ones will have been through the pain of his near-misses and been part of the rebuilding process each time. This time they can share the elation and adulation. It was to them that Smith made to race off stage to when the winning dart was thrown but in checking himself to stop and thank his opponent he showed his class.

The final may have been gripping mano a mano stuff played out in a boisterous bearpit at the Ally Pally yet it was one heightened by the respect on show. Smith paid warm tribute to the former champion afterwards as van Gerwen did in return, coming to Smith’s rescue when his words dried up.

Drying up was a theme of a memorable final – in the commentary box too. Wayne Mardle’s cries of ‘I can’t speak, I can’t speak’ after Smith threw his nine-darter may have been technically inaccurate but they were gloriously apposite.

No matter that they were ripped off Mick Morgan’s niche classic commentary on a 1994 Castleford vs Wigan rugby league match – every other observer was lost for words beyond ‘wow’ too.

Even the great Sid Waddell couldn’t have decorated the moment better – and that is saying something from the man who once observed: “If we’d had Phil Taylor at Hastings against the Normans, they’d have gone home.” Well, now we’ve got Michael Smith. And what a start to the year he has provided.