The historic moment has arrived for Novak Djokovic. Some time very soon, the world No.1 is going to affirm his record as the most successful male tennis player of all time, probably the greatest male or female, and well in the argument for the outstanding individual athlete of any kind, ever.

The accolade comes, often, through gritted teeth and with watering eyes. Djokovic’s greatness is acknowledged, what’s more, by the millions who have stopped watching tennis because they can’t stomach him. Nobody has done more in their sport while doing less for their sport. It’s a bizarre but compelling legacy.

His qualifications, first. If he doesn’t win his 21st grand slam tournament in the US Open this weekend, he will win it somewhere else, possibly Melbourne, where he hasn’t been beaten since Victoria last voted Liberal. Still an unbreakable 34, he might build such a monument by the end of his career that he can spend the rest of his life sitting on top of it looking down on everyone, confident he will be the best for all time.

Djokovic is the best because, to get where he has got, he has beaten the best. He has won 20 grand slams against the two other contenders for best ever male player, Roger Federer and Rafael Nadal. It is extraordinary that these three supreme talents have emerged together, but mind-boggling that Djokovic can have risen above the other two. To be the best, you must beat the best. (Which is why many rate Monica Seles, pre-stabbing, as the best-ever female: Graf was unbeatable for more than a decade, except in the three years in which Seles repeatedly drubbed her. And then, after coming back from her stabbing, Seles won an Australian Open.)

Having beaten the best, Djokovic is now steadily picking apart the threads of self-esteem holding together the next generation. On Saturday morning, Alexander Zverev might do what he did in Tokyo and upset Djokovic, whom he had not previously beaten since 2018 and never in a grand slam. You sense that the despair that lies buried beneath the loss of drive in Nick Kyrgios and several others has some foundation in the knowledge that while Djokovic is there, they can never be the best. 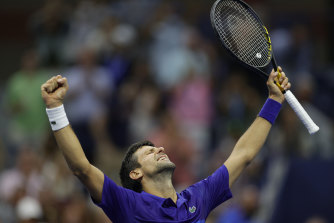 Novak Djokovic unleashes his trademark celebration at the US Open earlier this week.Credit:Getty

Greatest individual athletes? You rattle off Don Bradman and Heather Mckay and Michael Phelps and Steve Redgrave and Nadia Comaneci and Kelly Slater, whose personal dominance of their sports puts them beyond comparison. Babe Didrikson and Snowy Baker were freaks of versatility. But all played sports that were comparatively narrow in international competition.

Usain Bolt, Paavo Nurmi and Daley Thompson were (and Elaine Thompson-Herah is) supreme in the most accessible and democratic global sport: track and field. Sugar Ray Robinson was the greatest of boxers – another pretty inclusive sport, for men anyway – and Muhammed Ali was, is, and always will be, simply, the greatest. But that is personality, politics and romance as much as sports.

A tennis player, however, deserves singling out not just because it’s a truly global sport but due to the complex range of skills. Tennis requires not only stupendous stamina and blinding speed and reflexes, power and timing and a surgical touch, but all at the same time. A great tennis player has to be Bolt and Nurmi, and then catch their breath and be Tiger Woods too. The one thing they can’t do is tackle and get hit in the face, though Djokovic gives the impression he would be a tough body-contact competitor, if only because he might bring a gun to a knife-fight.

And yet, and yet. 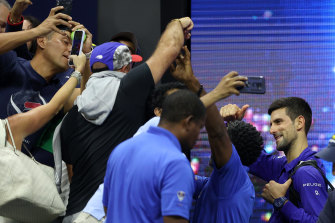 Djokovic’s legion of fans are seemingly dwarfed by an army of detractors.Credit:Getty

We know what it is. We struggle with the idea that when it comes to judging GOATs, we would like there to be a character test. We want the Pele glamour, the Jesse Owens dignity, the Michael Jordan dazzle. We want something more, and Djokovic has so often delivered something less. GOATs are often ‘judged’ by polls, which measure popularity, and Federer and Nadal always rank higher than Djokovic.

What has Djokovic done to deserve this? His rap sheet is long but nowhere near Lance Armstrong-grade. He had a habit of faking injury early in his career, either to put opponents off their game or to quit matches when he was losing so as to deny them the satisfaction of beating him. He has been obnoxious to officials, but hardly in the Connors-McEnroe category. He uses every gamesmanship trick in the book and has written a few new ones, and will never be accused of being the epitome of sportsmanship. His campaign to seem like a good guy has been as unrelenting as his tennis, but every now and then, under extreme pressure, what many take as the real Djokovic comes out. His Covid-Adria Tour-antivax debacle, Novak’s version of good works, seemed to say it all.

The ambivalence is real. Kyrgios, a comparative tennis non-entity, won himself a zillion Instagram followers by standing up and calling Djokovic out for being a dickhead. Still, it’s like the world is looking for reasons to dislike him. Federer and Nadal could manipulate injury breaks and other quirks in the rules and get away with it. Djokovic can’t.

Not since Ali has there been an individual sportsperson who absorbs so much punishment and emerges with the genius of the counter-attacker, having exhausted his opponent while they were thinking they were beating him. But with Ali it was the legendary rope-a-dope, whereas with Djokovic it is whack-a-mole. He is the mole that always gets away.

How much of the anti-Djokovic feeling is prejudice? I think a lot of us have to admit that there is some anti-Balkan bias involved here. The militaristic appearance, the finicky way of bouncing the ball, gives an uneasy vibe. Djokovic’s way of standing like Christ, arms spread, after a win, gazing skyward as if he can’t believe what Blind Freddy saw coming for the last two hours – another comeback victory. If you’re primed to dislike the Serbian army captain look, it’s as irritating as all get out. But is that because so many of us can’t see the charm? Is it an irrational xenophobic reaction?
The intersection of form and content is jarring when it comes to Djokovic, and this forces us to ask discomfiting questions of ourselves. Are we really in it for the excellence, or are we compromised by our biases? Federer never forced us to ask complicated questions about anything. He only requested that we behold the frictionless perfection of the style, the thing in itself. Djokovic is provocative, and that makes him interesting.

Whereas Federer brought so many to tennis, Djokovic’s methodical progress to the top has been, for many, a 10-year turn-off. Avid tennis watchers who have kept faith can rightly claim a purity of eye: they are seeing the tennis player, whereas others are turning away from the surface impression.

But that impression doesn’t count for nothing. While Federer’s majesty was remote, Djokovic implicates us. His tennis game has never had any outstanding signature such as a booming Serena Williams serve, the Federer touch or the Nadal forehand. What has always characterised Djokovic is an inexhaustible will to win. There is so much will to win, it’s gone beyond the boundary of the sport and is confronting, even ugly, to watch.

And that’s the thing with Djokovic: he has beaten all that tennis can throw at him; his final adversary is the uneasy viewer. His final victory, through the weight of his record, is over the spectator’s doubts. It’s not to win us over. It’s to make us submit.

Will Serena Williams’ wait for a 24th Grand Slam title finally be over in Melbourne?

Wimbledon 2019: When is Andy Murray and Serena Williams’ next mixed doubles match?