As the clock ticked towards 10pm on a stormy Tuesday night in Melbourne, Australian tennis stars Alex de Minaur and Thanasi Kokkinakis were shaking their heads in disbelief.

But there was a difference in where they were positioned and one that demonstrates the advantages top players receive at tournaments in comparison with the rank-and-file. 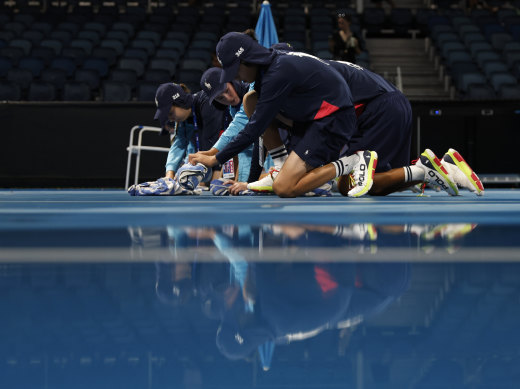 Ball kids dry off the courts after rain stopped play at the Australian Open.Credit:AP

The 22nd seeded De Minaur was safely ensconced in the second round of the Australian Open and was holding a press conference, counting his lucky stars he played his match under a roof.

In contrast Kokkinakis, who is now ranked 159, was staring at the sky in bewilderment while sitting courtside on Kia Arena as rain bedevilled his hopes of finishing his match against Italian Fabio Fognini.

“Geez, it’s been a tricky day for everyone involved,” de Minaur said.

“It’s been a long day. For a lot of the players, it would have been very hard to stop, adjust, adapt and get ready to stop and start their matches. 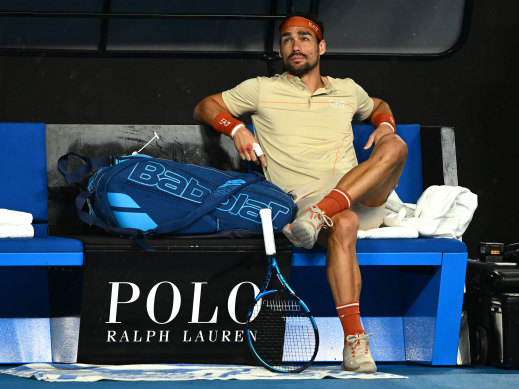 Italian Fabio Fognini waits out the rain during his suspended match against Thanaski Kokkinakis.Credit:Getty Images

“Kudos to all the players that had to deal with that today.”

The bizarre weather that hit the second day of the Australian Open caused havoc across Melbourne Park with searing heat and then heavy rain delaying or cancelling 22 matches.

Coverings in place to shield players from the sun midway through the day served as umbrellas later in the night on a program that finished after 2am. 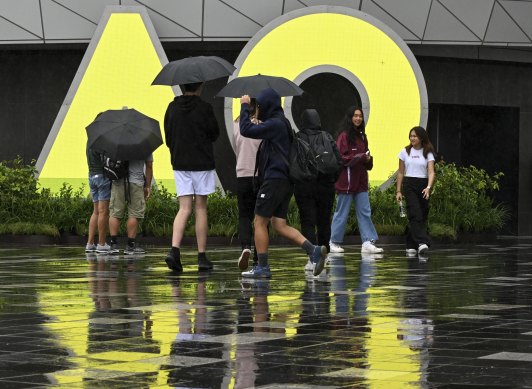 Crowds contend with showers at the tennis.Credit:Penny Stephens

“I honestly could not have done it without you,” he told the fans remaining in the stadium.

“I know it is a cliche but, honestly, at 2am, I’m usually asleep for four hours at this time.

There was frustration from players awaiting the schedule for Wednesday’s play, which was not released until close to midnight as Australian Open officials scrambled for a solution.

Scottish doubles star Jamie Murray, whose brother Andy Murray pulled off a classic win over Matteo Berrettini on Tuesday, described the delay in releasing the schedule as “unfair”.

Effectively, he said, players need some certainty with scheduling to be able to deal with the demands that come with preparing for their matches the following day.

Belgian Kirsten Flipkens, who is now a doubles specialist, was also critical on social media.

With play on outside courts delayed until at least 2pm on Wednesday due to persistent rain, those complaints were diluted. But the delays will mean a compressed schedule for some players in the coming days as the big stars go about their business as usual.

Dealing with rain delays at tournaments is not unusual. Adversity is part of life on the tour, be it flying from one time zone to the next, or playing matches in quick succession.

Players develop routines to ensure they are prepared to cope with whatever the conditions throw at them.

Between stretching and warming up they will eat snacks to ensure their energy levels are adequate to ensure they can perform at their peak when play resumes.

But when it comes to fairness in grand slams, it is rare that there is equality, with seeded players favoured whenever weather conditions create havoc.

They are the ones who play in stadiums with roofs, which means that their tournament schedules continue as usual while their rivals are dealing with either delays or matches in consecutive days, a point the 22nd seeded de Minaur noted on Tuesday night.

“I’ve been fortunate enough to have been scheduled on one of the three courts with a roof, so was able to kind of have my day not broken up too much,” he said.

A classic illustration occurred on Wednesday at Melbourne Park, with world No.1 Iga Swiatek progressing to the third round with a 6-2, 6-3 victory over Camila Osoria.

At that stage 24 women in the 128-draw had not concluded their first round matches, with former US Open champion Sloane Stephens among the 16 yet to play a point.

One solution could be to move more matches that were scheduled for outside courts onto the main arenas with roofs, as happened with Popyrin’s match, but those who have forked out for centre court tickets expect to see the top-ranked players in the world.