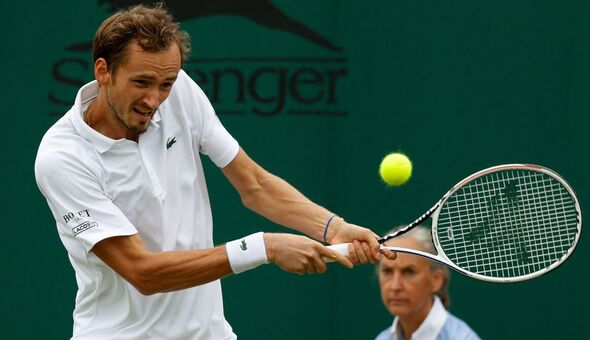 Tennis fans have backed Wimbledon organisers for banning Russian and Belarusian players as chiefs are set to make a U-turn on their decision for this year’s tournament. According to Express Sport readers it was unfair for the governing bodies to fine Wimbledon for banning players from last summer’s tournament amid the ongoing war in Ukraine.

The Times have reported that Wimbledon organisers are set to lift their ban on Russian players after the ATP Tour threatened to increase sanctions and ban British tennis players from their events. The LTA were slapped with a fine by tennis’ governing bodies the ATP and WTA after last year’s event and also lost their tournament ranking points for enforcing the ban on Russian players.

However, fans agree with the expected U-turn and think that it is right to allow Russian players to return to SW19 this summer. Readers were asked: “Should Wimbledon allow Russian and Belarusian players to play in 2023? A total of 52.9% responded ‘yes’ while 47.1% said ‘no’.

Tennis Australia have emphasised their position of allowing Russian players to compete at the opening Grand Slam tournament of the season. Their statement said: “Players from Russia and Belarus are only able to compete in international tennis events as individuals – and without flags or country recognition – which will be the case for Australian Open 2023.

“Tennis Australia continues to provide support to Ukraine and its community and players, particularly through the global Tennis Plays for Peace initiative, which includes a charity event prior to the Australian Open.” However, the tournament has received criticism from the Ukraine Embassy in Australia who want them to ban Russian athletes from competing.

Russian tennis players Andrey Rublev and former world No.1 Daniil Medvedev are set to compete at Melbourne Park when the Australian Open begins on January 16. Rublev previously wrote ‘no war please’ on a television camera after a match and suggested alternatives to an outright ban on Russian players taking part in tournaments.

He added: “We offered some solutions that could be really helpful diplomatically – playing in mixed doubles with Ukrainians or not coming for the medals. We wanted to use the platform of a championship to show that we don’t fight here, that there is no war in tennis. It’s most important now.”

Kyrgios has earned his beer after edging out Humbert at Wimbledon