Mayweather was widely expected to wipe the floor with Paul in their exhibition bout in Miami on Sunday night.

But, despite easing into the fight to give the fans some rounds of entertainment, when Mayweather tried to turn up the power and score a knockout, he found Paul too tough a nut to crack as the bout went all eight rounds.

White admitted he didn’t fork out for the pay-per-view at the weekend, but did say that he felt it was time for Mayweather to call it quits.

“I didn’t see it, but I heard it went the distance, and I would love to see Floyd retire. No more,” he told TMZ Sports.

While White said Mayweather should hang up his gloves for good, he had a more positive take on Logan and Jake Paul, the two hugely popular YouTubers who have taken the world of combat sports by storm and polarised the industry by garnering huge paydays and bouts way in excess of what athletes with their level of experience should be able to achieve. 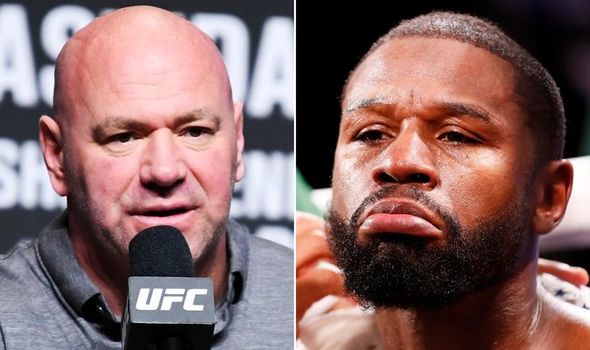 Many have been critical of the siblings, but White said he was suitably impressed by how they’ve managed to carve a niche for themselves in the business.

“There’s no doubt when you look at those two kids that they take it seriously,” he said.

“They really do train hard. They’re not just showing up for a paycheque.”

And, when asked if he’d entertain the possibility of Logan Paul following his dream of one day competing in the octagon, White admitted he has a prior track record in this regard, but wouldn’t commit either way.

“Here’s the thing, that’s not to say that I haven’t taken in a guy that’s 0-0 and done those type of fights before… I don’t know.

“Listen, I’ve got no hate for these kids at all. These kids have figured out a way to parlay their success on YouTube and their popularity into going in and making big money fights – good for them.

“I say this all the time. There’s always going to be a market for these types of fights.

“What do you think Kim Kardashian would make if she came in and fought Amanda Nunes? Probably more than anybody’s ever made, ever.

“These kids started a f****** YouTube channel when they were 12 years old, they’ve built this up over years.

“This isn’t just ‘they did this overnight.’ They built this up over years and years, and they got in the gym, and they parlayed this into whatever it is now.”

The UFC is set to take centre stage in the combat sports world again this weekend when UFC 263 plays to a full house in Glendale, Arizona.

Speaking about Diaz’s return, White said he’s expecting to see nothing different from the all-action fights we’ve seen from Diaz in the past.

“I think we get the same Nate Diaz every time he shows up. He comes in and fights his a** off,” he said.

“Stylistically, this is a good fight, because Leon Edwards is going to stand and trade with him.

“There shouldn’t be too much wrestling going on, unless Diaz is going for a submission or something. This should be a good fight.”

And, while White confirmed that former interim champion Colby Covington remains the likely next opponent for welterweight champion Kamaru Usman later this year,the UFC boss said there was a slight chance that Diaz could gatecrash those plans with a big win over the Brit on Saturday night.

“I don’t know. It’s a possibility,” he offered.

“There’s so many things that factor into the title, but the reality right now is Colby Covington is next in line.

“Colby Covington’s the number one contender in the world.

“The first fight between him and Usman was insane – one of the best fights I’ve ever seen.”

Kamaru Usman net worth: How much has the UFC 251 star earned?