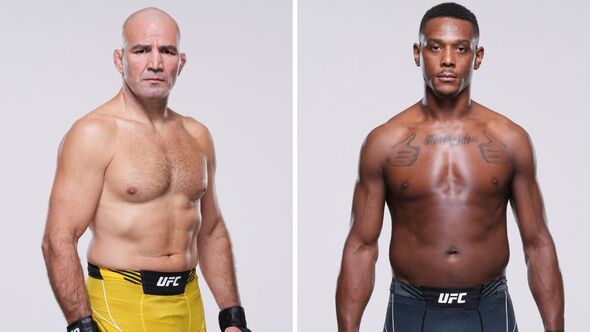 Glover Teixeira and Jamahal Hill are set to square off tonight for the vacant UFC light heavyweight title in Brazil. The 205lb strap was recently relinquished by former champion Jiri Prochazka after suffering a serious shoulder injury that is expected to have a lengthy rehabilitation process.

Prochazka won the title from Teixeira in June and was scheduled to rematch the Brazilian last month. However, Denisa’s injury put a halt to those plans and now Teixeira has instead been booked to face No7 ranked Hill for the belt.

The American is on a three-fight winning streak coming into fight night with victories over Jimmy Crute, Johnny Walker and Thiago Santos in recent outings.

UFC 283 is being held over in Rio de Janeiro, Brazil at the Jeunesse Arena. The prelims are scheduled to start at 11pm for UK fans with the main card getting underway from 1am on Sunday morning. Teixeira vs Hill is then expected to take place at 4am.

The action is being shown on BT Sport 1 with their coverage starting at 1am. All of the night’s proceedings can be live-streamed via the BT Sport app on all good internet-connected devices including laptops, mobile phones and Smart TVs.

Hill: “[I’m] just hungry – ready for the kill. Whenever I’m in a faceoff or whenever I’m in the cage, you see the difference in my eyes. It’s a competitor, and this competitor is a killer.

“I [saw] some fire in his eyes. I [saw] that he’s just ready. You can tell he’s been here before and he’s ready to go through it, but I just didn’t see the same fire that I’m coming with.”

Hill added: “I’d say Glover would probably be the biggest test of my career to this point, just because the level he’s fought at, the level he’s been fighting at, and just the experience and overall the strength of schedule that he had.”